Ariarne Titmus has lowered her own personal best and set another Commonwealth record in the 400m freestyle to punch her ticket for the FINA World Championships in Korea next month.

The freestyle sensation was the pick of the swims on night one of the trials in Brisbane on Sunday, stopping the clock at 3:59.35s to win by a space in the Chandler pool, lowering her old mark by 0.31s.

She went out at pace and had her coach Dean Boxall racing up and down the pool deck urging her on when a truly special time seemed on the radar. But Titmus hit a mini-wall late and said she was slightly disappointed with her time, even though it was a personal best. 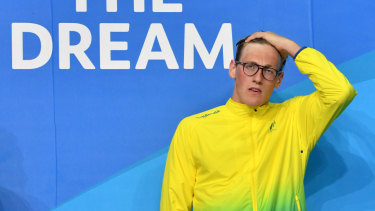 Tough night: Olympic 400m champion Mack Horton will have to qualify outside his pet event to book at spot at the world titles.Credit:AAP

"I wanted to try and put together a really great swim. To be honest, I'm a bit disappointed with the time. I've been training really well and thought I might have had a 3:58 in me," Titmus said.

"Hopefully at worlds I can produce something even better."

Titmus and American champion Katie Ledecky are the only swimmers to have broken the four-minute mark in the event but Titmus said must now be her bare minimum if she wants to medal in the event at the Tokyo Games next year.

I wanted to try and put together a really great swim. To be honest, I'm a bit disappointed with the time.

Jack McCloughlin (3:44.34s) took out the men's 400m freestyle in his home pool, with Rio Olympic champion Mack Horton second in 3:46.47s, which fell short of the qualifying mark.

He must now qualify via the 200m freestyle (individual or relay spot) or the 800m to ensure he gets on the plane to Korea.

Emma McKeown was safely through in the 100m butterfly, winning under the qualifying time to take the pressure off the rest of her week, while Kaylee McKeown impressed in the women's 200m IM with a personal best of 2:09.94s that qualified her for the World Championships.

McKeown is still 17 and that time would have put her in the Olympic final in Rio. With 12 months to go ahead of Tokyo, she may be a serious player in that event.