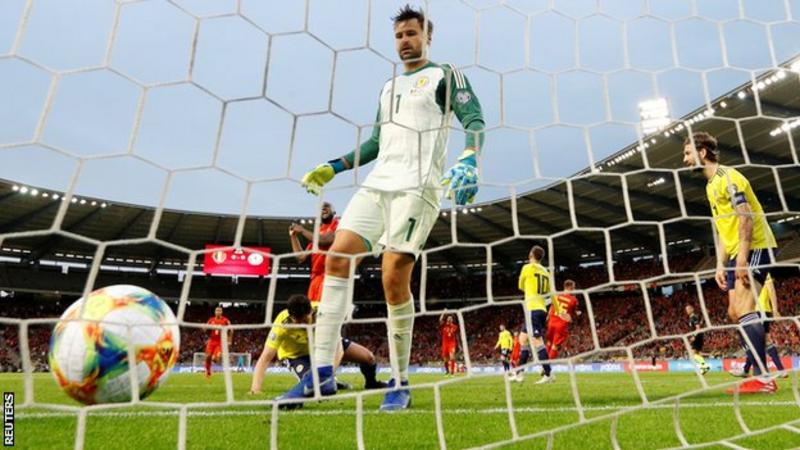 Steve Clarke suffered his first defeat as Scotland boss as Belgium preserved their 100% Euro 2020 qualification record with a perfunctory win.

Romelu Lukaku netted either side of the break in Brussels and Kevin de Bruyne added a stoppage-time third to condemn the Scots to a second away defeat in four Euro 2020 qualifiers.

A much-changed Scotland proved doughty opposition for the world’s best side, but find themselves fourth in Group I – three points adrift of Russia in the second automatic qualification place.

Clarke’s side now must steel themselves for Hampden dates with Russia and Belgium in September, knowing they will need to harvest points from those games to revive their hopes of automatic qualification.

Scotland have, though, already secured a Nations League play-off semi-final should they fail to finish in the top two of Group I.

The grievous pre-match revelation that captain Andy Robertson would be absent with a hamstring problem did little to dissuade those envisaging a hideous hammering. Would it eclipse the 7-0 hiding by Uruguay in the 1954 World Cup finals? Or the six-goal margins of defeat against England in 1961 and the Netherlands in 2003? Or maybe it would only be on a par with the five-goal towsings by the likes of England, Austria, Portugal and France?

After all, back four drawn from Kilmarnock, Aberdeen and Blackburn Rovers were an unlikely bulwark against some of the game’s finest attacking talent. Greg Taylor, at 21, was making his debut up against Manchester City’s De Bruyne. Kilmarnock colleague Stephen O’Donnell was tasked with neutering £150m Real Madrid signing Eden Hazard. Charlie Mulgrew and Scott McKenna were left to scrap with Manchester United’s Lukaku. This was not a night for Clarke to be without his only world-class player.

With that in mind, the decision to leave out Bournemouth’s Ryan Fraser – second only to Hazard for assists in Europe’s top five leagues this term – was especially eye-opening. His replacement on the left of a midfield five, Stuart Armstrong, eked out the first real opening when his flick was gathered by Oliver Burke, only for the West Bromwich Albion attacker to tug his shot wide. It was to be the Southampton player’s only significant contribution before hirpling off just after the half hour with Fraser reinstated.

That half chance for Burke was a rare foray upfield. At the other end, Hazard had already offered a reminder of his talents with a wriggle and spurt past O’Donnell on the left, before repeating the trick in the middle of the pitch and feeding De Bruyne, whose fierce strike was helped over the bar by David Marshall. The goalkeeper then shovelled away Axel Witsel’s effort from the resulting corner.

The pressure built as the half went on. De Bruyne lashed wide after Taylor got into a funk trying to deal with a fiery Johnny Russell pass; Witsel had header cleared; Marshall had to soar towards his top left-hand corner to paw away a speculative De Bruyne effort; and Lukaku butchered a tap-in by trying to be too cute.

For all that Belgium were dominant, Scotland were robust, diligent and organised. But those prosaic qualities melted away in one wretched moment as the interval approached. Hazard birled around Kenny McLean and fleetingly lost control of the ball before retrieving it from the touchline after Scott McTominay tried to let it run out. The attacker’s cross was for perfect for Lukaku, who powered above Mulgrew and planted a header into the net.

The Belgians – with 797 caps and 126 goals between them, compared to Scotland’s 146 and seven – were never likely to cede that advantage and the second half proved a trial for the visitors. Within 12 minutes of the resumption, the impressive McTominay gathered a booking that will exclude him from Russia’s visit and the Belgians killed the contest with their second.

Marshall had already beaten away a free kick by the ubiquitous De Bruyne before the Manchester City conductor had another lash. This time, though, Lukaku was on hand to ram the rebound past the prone goalkeeper as the Scots desperately pleaded for an offside offence against De Bruyne in the build up.

From that point on, it was about damage limitation for a group of players with memories of the 4-0 friendly collapse against the same opposition at Hampden last September. They were helped by the Belgians easing up, content that their work was done and that season was over, albeit Lukaku, Hazard and De Bruyne all fizzed in efforts to keep Scotland honest.

As the game ticked into its final 10 minutes, Scotland did finally force Thibaut Courtois into action. First, the Real Madrid goalkeeper flung himself to his left to push away a curling Fraser effort, then barrelled from his goal to thwart a rampaging McKenna with his feet before doing enough to distract James Forrest as he attempted to ram in the loose ball.

There was to be no repeat of Burke’s late goal against Cyprus on Saturday, though, and it was the Belgians who completed the scoring, the peerless De Bryune spanking in a ferocious finish to gild his accomplished performance. 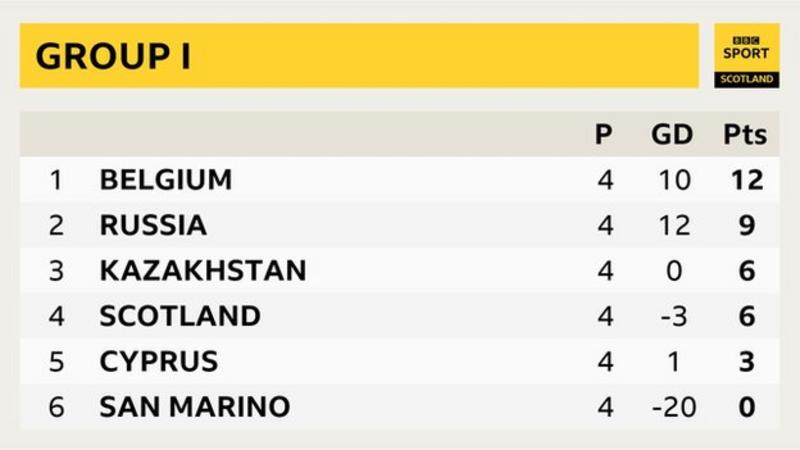 ‘Reasons to be cheerful for Clarke’ – analysis

Yes, it was a defeat and, yes, Belgium eased through the second half, but with a little perspective, Clarke will take positives from this game. He lost his captain before kick off and made some eyebrow-raising changes, but in the first half, and for some of the second, Scotland were organised and defended with grit.

They rode their luck at times and Marshall was a busy man, but McTominay and McLean caught the eye and Scotland did create the odd chance.

So despite the 3-0 defeat, it feels right to focus on the positives. It was no surprise that Scotland lost to the world’s best team, but after the dust settles, this match will surely add to the development under the new Scotland manager.

Attempt blocked. Yannick Carrasco (Belgium) right footed shot from the left side of the box is blocked. Assisted by Kevin De Bruyne.

Eden Hazard (Belgium) wins a free kick in the attacking half.

Thomas Meunier (Belgium) wins a free kick in the defensive half.

Attempt saved. Eden Hazard (Belgium) right footed shot from outside the box is saved in the centre of the goal. Assisted by Thorgan Hazard.

Attempt blocked. Scott McKenna (Scotland) left footed shot from the centre of the box is blocked. Assisted by Oliver Burke.

Axel Witsel (Belgium) wins a free kick in the attacking half.

Attempt saved. Ryan Fraser (Scotland) right footed shot from the left side of the box is saved in the top right corner. Assisted by Kenny McLean.

Scott McTominay (Scotland) wins a free kick in the defensive half.

Attempt missed. Romelu Lukaku (Belgium) left footed shot from the right side of the box is close, but misses to the left. Assisted by Toby Alderweireld.

Kenny McLean (Scotland) wins a free kick in the defensive half.

Attempt missed. Romelu Lukaku (Belgium) right footed shot from the right side of the box misses to the left. Assisted by Vincent Kompany.

Attempt saved. Kevin De Bruyne (Belgium) right footed shot from the centre of the box is saved in the bottom right corner. Assisted by Eden Hazard.

Attempt missed. Romelu Lukaku (Belgium) left footed shot from the left side of the six yard box is close, but misses to the left following a set piece situation.

Attempt blocked. Toby Alderweireld (Belgium) header from the centre of the box is blocked. Assisted by Kevin De Bruyne with a cross.

Scott McTominay (Scotland) is shown the yellow card for a bad foul.