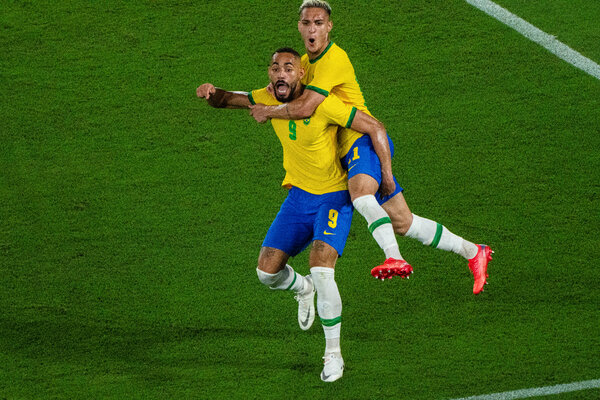 It took Brazil 64 years to win its first Olympic gold medal in soccer. Five years later, it has its second.

Playing in the same stadium in Yokohama where its national team won the 2002 World Cup final, Brazil repeated as Olympic champion on Saturday by beating Spain, 2-1, in extra time.

Malcom, a 24-year-old forward who plays for the Russian club Zenit St. Petersburg, delivered the winner as a fresh-legged substitute, scoring off a long lead pass in the 108th minute.

The Olympic men’s tournament is an under-23 championship, an accommodation with FIFA, the sport’s global governing body, to maintain the primacy of the World Cup as the sport’s showcase event. But it remains an important barometer of a country’s ability to produce young talent.

Matheus Cunha had given Brazil the lead in first-half injury time. After controlling a ball between two Spanish defenders in the penalty area, he inexplicably found himself alone only yards in front of goalkeeper Unai Simón and slotted home a low shot.

Spain answered in the 61st minute off a crisp finish at the back post by Mikel Oyarzabal, one of a handful of young players called in to the Olympic squad only weeks after helping Spain’s senior team reach the semifinals of the European Championship.

Oyarzabal’s goal extended their long, hot summer to extra time, where Malcom and Brazil had the last word. By then, Spain’s best players may have simply run their race: Pedri, the team’s wondrously talented 18-year-old midfielder, was playing his 71st match for club and country since the start of last year’s La Liga campaign, a staggering workload that had brought complaints from his club coach, Ronald Koeman of Barcelona.

“It’s too much,” Koeman said. Yet go he did, despite playing a grueling, compressed league schedule and then all but one minute of Spain’s run to the European Championship semifinals.

The medal was Brazil’s seventh in the Olympic tournament, and came five years after a team led by Neymar won the country’s first gold on home soil in Rio de Janeiro.

Its victory also came on familiar ground: Brazil had defeated Germany at Yokohama International Stadium 19 years earlier, in the final of the 2002 World Cup. Ronaldo scored twice that day for Brazil.

Four years later, Brazil introduced Dani Alves, a young defender who would go on to become one of the most decorated players in soccer history. Alves’s glittering career includes league championships in Spain, Italy and France and three Champions League titles with Barcelona.

On Saturday, he added an honor that he had been missing: an Olympic gold medal.