WWE icon Bret Hart has lifted the lid on his tumultuous relationship with Vince McMahon by admitting he once decked his former boss.

The two memorably went years without speaking following the events of the Montreal Screwjob at Survivor Series in November 1997. 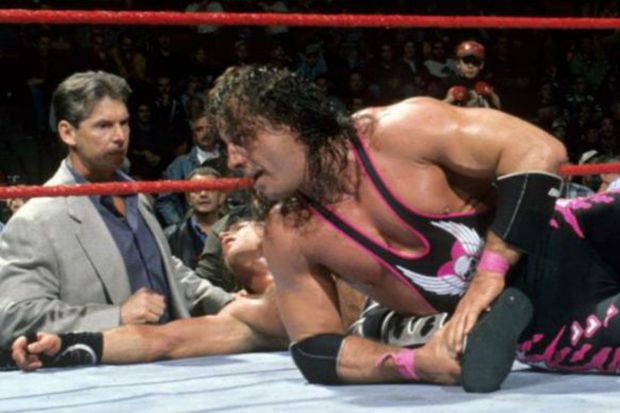 Hart – at the time one of the company's biggest stars and current WWF champion – was set to jump ship to McMahon's then-rivals WCW.

The 63-year-old had refused to drop the belt to Shawn Michaels in his native Canada at Survivor Series and instead agreed to surrender his title back in America the following week.

Yet on the night, McMahon infamously ordered referee Earl Hebner to call for the bell early in HBK's favour despite Hart not submitting.

‘The Hitman’ has since revealed he knocked out the WWE chairman in a fit of rage at being humiliated when he returned to the dressing room.

A lot of my hard feelings toward Vince were tied in around my history and I assumed when I knocked him out in the dressing room in Montreal, that all of that would be lost to me.

Hart also admitted that a lot of the ill-will he once had for McMahon was because he was worried that he would be written out of WWE history.

The wrestling icon opened up about the experience in a recent episode of Confessions of The Hitman, as quoted by WrestlingInc.

He said: "A lot of my hard feelings toward Vince were tied in around my history and everything I gave to him – all the great matches I gave him – and I assumed when I knocked him out in the dressing room in Montreal, that all of that would be lost to me.

"Nobody would see those tapes anymore or those matches and my history would be erased to a certain degree, and that really bothered me because I worked so hard and really gave so much in my matches.

"And I think it shows today when people look back on my career how much it would have bothered me to have most of those great matches that people still talk about erased from their memory, and nobody is going to see them anymore and nobody talks about them anymore.

"To me, that was priceless. Like, it meant everything."

Hart and McMahon have since buried the hatchet with the former finally returning to WWE after 12 years for a match at WrestleMania 26.

He added: "I think me and Vince have reached an understanding where we don't bring up a lot of old, dodgy stuff, and we kind of buried the hatchet.

"And Shawn Michaels and everyone else, like, I think in the end, I'm still proud of the way I handled myself through the whole Screwjob period.

"But in all honesty, I think they're not proud of their conduct; I don't think. I think they kind of realized now that that was kind of a dumb way to go, and unprofessional way to go, and it caused way more problems than they ever imagined, even though they made money off of the whole concept of what happened.

"Me and Vince, I think it goes back a number of years – we kind of buried the hatchet."

END_OF_DOCUMENT_TOKEN_TO_BE_REPLACED

END_OF_DOCUMENT_TOKEN_TO_BE_REPLACED
Recent Posts
We and our partners use cookies on this site to improve our service, perform analytics, personalize advertising, measure advertising performance, and remember website preferences.Ok