Home » Sport » Brooks Koepka and Bryson DeChambeau Are Still at It. But Is Their Spat for Real?

Brooks Koepka and Bryson DeChambeau Are Still at It. But Is Their Spat for Real?

SAN DIEGO — The latest episode of the Brooks Koepka-Bryson DeChambeau feud did not stray from its amusing course on Tuesday, continuing to be golf’s most entertaining sideshow in years.

Koepka, with his usual grumpiness, said of his relationship with DeChambeau: “We don’t like each other.” He added, “I don’t know if I’d call it a conflict,” then suggested that some of the reporters standing next to him probably did not like each other either.

About an hour later, a cheerful, almost giddy, DeChambeau was all smiles talking about the topic of Koepka at Torrey Pines Golf Course, where the 2021 U.S. Open will begin Thursday. It was a stark contrast to two weeks ago when DeChambeau seemed perturbed with Koepka and somberly said the PGA Tour should consider whether Koepka’s snarky videos and tweets trolling DeChambeau were, “how a tour player should behave.”

On Tuesday, DeChambeau instead called the public back-and-forth “fun” and “great for the game of golf.”

“There’s a point where it’s great banter,” he said, with a joyful grin. “I personally love it.”

So, nothing has changed. The quarrel between two, brawny, 20-something professional golfers paid to wear natty golf attire and perfectly buffed shoes continued without a script — a pillow fight that stands out in a world dominated by the use of courtly pleasantries.

There was, however, one bona fide disappointment revealed Tuesday: This year’s U.S. Open, where DeChambeau is the defending champion, will not give golf fans what they wanted most, which was Koepka and DeChambeau going head-to-head in the same playing group in the first and second rounds on Thursday and Friday.

The duo will instead tee off many hours apart with other playing companions, which means they might not even see each other at Torrey Pines unless they happen to card similar scores early and are paired in the final rounds on the weekend. Golf fans should pray for that outcome.

Shortly after the tee times for the opening rounds were announced on Tuesday morning, a report surfaced that DeChambeau, or his representatives, had contacted the United States Golf Association, which conducts the event, and requested that Koepka not be part of DeChambeau’s group.

Within an hour, representatives for DeChambeau and the U.S.G.A. denied that DeChambeau had made such an appeal, something DeChambeau later confirmed. 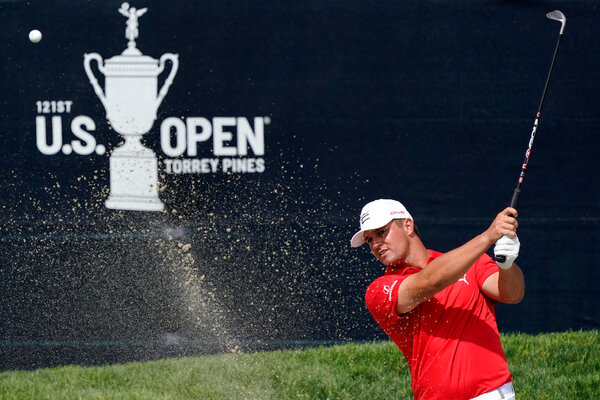 “I would be OK with that,” he said of playing with Koepka, “but there was never really anything that went through me.”

Koepka said no one approached him about playing with DeChambeau, nor did he care who his partners were. With a straight face, he then dropped this heavy thought: “I’m not concerned about what other people think. If I was concerned about what everybody else thought, I’d have been in a world of pain.”

On a lighter note, there was much discussion about whether the spat between Koepka and DeChambeau is good for golf. DeChambeau and Koepka, curiously with the same thought, insisted that it was, and Koepka offered evidence.

“It’s bringing new eyeballs,” Koepka said. “It’s pretty much been on every news channel. Pretty much everything you look at online, it’s got this in the headline or it’s up there as a big news story. To me, that’s growing the game.

Not long afterward, Webb Simpson, the 2012 U.S. Open champion who has one of the most sunny personalities in golf, agreed wholeheartedly, although he also dropped a bomb of a sort-of accusation.

“I think they’ve got a rivalry now, and I think it’s good,” Simpson said. “There used to be more golf rivalries that became well-known.”

Simpson then lobbed this notion: What if the whole so-called Koepka-DeChambeau grudge was a ruse, a conspiracy between the two to raise their social media profiles to improve their chances of getting some of the moolah in the PGA Tour’s new $40 million Player Impact Program?

The initiative will pay end-of-season bonus money to 10 players based on an amalgam of metrics, with a top measure being a golfer’s Google search popularity.

“I don’t know if they texted each other on the side and possibly went in agreement,” Simpson said, with a grin. “You know, let’s play this thing up for the Player Impact Program. That was kind of one of my thoughts.”

Wow. No wonder DeChambeau was smiling Tuesday. We already know Koepka has the practiced poker face.