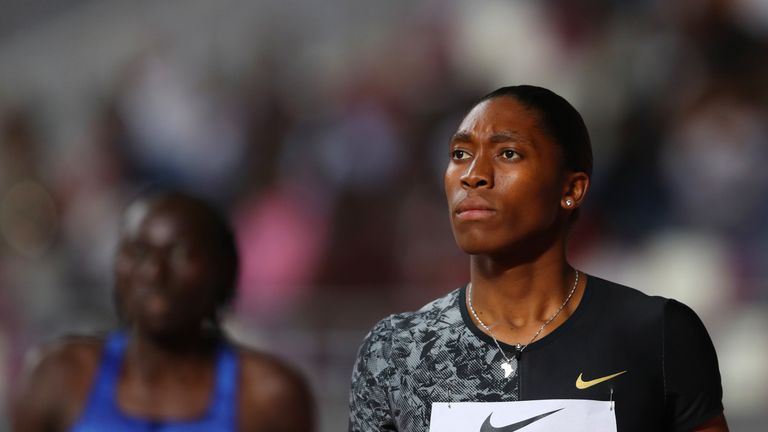 Caster Semenya has expressed disappointment over a court ruling which means she will be prevented from defending her 800m title at the World Athletics Championships in Doha next month.

The Swiss Supreme Court has reversed a ruling that suspended a regulation imposed by the sport’s governing body, the IAAF, regarding testosterone levels pending Semenya’s appeal.

The ruling effectively means South Africa’s Semenya would be obliged to submit to hormone-reducing medication – something she has resolutely refused to consider – in order to continue to compete.

In a statement issued through her PR agency, Semenya said: “I am very disappointed to be kept from defending my hard-earned title, but this will not deter me from continuing my fight for the human rights of all of the female athletes concerned.”

Semenya said in an interview with the BBC earlier this month she felt she had been “crucified” in the course of her fight against the IAAF’s complex rules regarding ‘Athletes with Differences of Sex Development’. Last month Semenya won an interim suspension of the rule in the Swiss court, but this has been reversed due to the court’s finding that the “high threshold” for suspension were not fulfilled.

Semenya, who posted a pair of possibly cryptic tweets earlier on Tuesday saying she was “looking forward to the second chapter” of her life, has vowed to continue her legal battle.

Dorothee Schramm, the lawyer leading her appeal, said: “The judge’s procedural decision has no impact on the appeal itself.

“We will continue to pursue Caster’s appeal and fight for her fundamental human rights.

END_OF_DOCUMENT_TOKEN_TO_BE_REPLACED

HANAU, Germany (Reuters) – A gunman with suspected far-right links shot dead nine people, some of them migrants from Turkey, in an overnight rampage through a German city before killing himself, officials said. Chancellor Angela Merkel condemned the attack on two shisha bars in Hanau, near Frankfurt. She told reporters

END_OF_DOCUMENT_TOKEN_TO_BE_REPLACED
Recent Posts
We and our partners use cookies on this site to improve our service, perform analytics, personalize advertising, measure advertising performance, and remember website preferences.Ok