PORTO, Portugal — Last summer, with the coronavirus raging through Europe, leaders at European soccer’s governing body huddled to find a way to salvage the Champions League, one of the game’s most popular competitions and among its biggest sources of revenue for its elite clubs.

With borders closed to all but essential travel, the Champions League’s traditional home-and-away format was abandoned and replaced by an eight-team knockout tournament in a single city, Lisbon. The new format, born out of crisis, was a hit, produced thrilling matches, soaked in jeopardy, and huge global television audiences.

The changes proved so popular with Champions League organizers, in fact, that they are giving serious consideration to incorporating some of them permanently.

As Chelsea and Manchester City prepare to meet Saturday in this season’s final, leaders of European soccer’s governing body, which runs the Champions League, are preparing to unveil a plan to change the format of the final stages of the competition. They have alighted on a “champions week” concept in which two winner-take-all semifinals and the final will be played in one city, and supplemented by a schedule of concerts, games and other events.

Champions League officials refused to discuss proposed changes on the record this week, but interviews with several officials involved in the discussions confirmed that the idea is under serious consideration. The officials spoke on condition of anonymity because they have not formally discussed the idea with the clubs that would be affected by the changes.

The concept of a so-called champions week, which would produce the focused drama of the final weekend of a tennis major or college basketball’s Final Four, has been under consideration in the past. Soccer’s leaders have for years cast envious glances toward the N.F.L.’s management of the Super Bowl in the hope of emulating its week of pregame festivities for its own blue-ribbon event. But fearful of disrupting soccer’s traditions — and of endangering any broadcast revenue by losing two semifinal games — they have shied away from making any major changes.

Until the pandemic changed everything.

Talks about a champions week gathered pace after the emergency event last year in Lisbon. Executives from the participating clubs spoke positively about the event and — crucially — reviewed data that showed the television audiences held up with a neutral-site, single-elimination format for the biggest games.

For European soccer’s governing body, UEFA, which has already announced the most fundamental changes to the format of the Champions League in a generation, there is an important financial calculation to be made. The Champions League semifinals, which are currently played in home-and-away ties in the participants’ home stadiums, are some of the most sought-after television properties in soccer.

“At the end of the day, you are talking about removing two fixtures between two of the best four teams in the competition,” said Julian Aquilina, a television analyst at the research company Enders Analysis.

According to senior UEFA executives, though, the estimated audiences for the semifinals are large enough to mitigate most of the losses of losing the second legs. The change would most likely be cheered by leaders of Europe’s domestic leagues, who have long complained about the encroachment on the soccer calendar of more and more European games, and possibly even by advocates for the growing women’s game, if their own showcase final was pulled onto a bigger stage as part of a weeklong celebration.

The plan most likely would see other events, including concerts, legends games and a youth final, take place in the host city. The week would culminate, as always, in the final on Saturday night.

“The sponsors will love it,” said Tim Crow, a consultant who has advised several major companies involved in events like the World Cup and the Olympics. “The Super Bowl model is like that, when it’s not about the game, it’s about the week.”

Crow said the event’s current format means attention generally shifts to the Champions League’s denouement only on the day before the final.

“This way you have a much more concentrated and longer period of activation,” he said. “The big thing in sports at the moment is landing somewhere and spending concentrated time there. This is very much of its time — it gives a lot more depth to it.”

Any changes would not come into effect until at least 2024, when the new Champions League format begins. UEFA would not be the first regional body to reshape its biggest club championship; Concacaf, the governing body for soccer in North and Central America and the Caribbean, recently announced that it would abandon a two-legged club final as part of a series of changes. 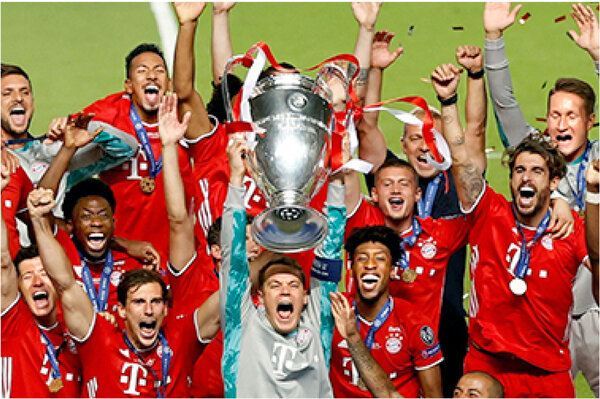 The Champions League Is Changing. Here’s How It Will Work.

After more than a generation in its current form, the Champions League is remaking itself, and about to become an actual league for the first time.

The first signs that UEFA favored a change to the end stages of the Champions League emerged after last year’s matches in Lisbon. The organization’s president, Aleksander Ceferin, said at the time that one-day semifinals like those played last season would lead to more attractive games, arguing that two-legged ties too often produced contests stifled by risk-averse tactics.

“If it is one match, if one team scores, then the other has to score as soon as possible,” Ceferin told Reuters last year. “If it is two-legged system, then there is still time to win the next match.”

Discussions around the future of European soccer have been furiously debated for more than a year, but they grew more urgent last month after 12 top clubs began an aborted effort to break away and create their own competition. Most in Europe saw the idea as a direct attack on the Champions League, and a grab for its huge revenues.

That effort ended in a humiliating retreat for the founding members only 48 hours later, but the repercussions have continued.

UEFA is caught between the demands of the biggest clubs, who want more of soccer’s income for themselves, and the desire of hundreds of other teams, and their fans, who are demanding a fairer distribution of the riches.

On Thursday, Ceferin used a speech at an event to yet again denounce the breakaway clubs, which included this year’s two Champions League finalists, but also to remind the soccer community that its success relies on remaining connected.

“You can rest assured UEFA is committed more than ever to supporting the entire football pyramid,” Ceferin said. “We want to maximize passion, not profits.”

Still, money is at the heart of the game’s ills. The pandemic has exposed mismanagement at many clubs, and many fear its economic consequences will only widen the gap between rich and poor.

UEFA published a financial analysis last week that predicted the continent’s top-flight clubs would sustain losses of more than 8 billion euros (nearly $10 billion) as a result of the coronavirus. Manchester City, the Premier League champion, has attributed a loss of nearly $180 million to the pandemic, while the Italian champion Inter Milan, which recently secured its first domestic title in a decade, now faces a fire sale to make ends meet.

Faced with the continentwide cash crunch, and perhaps as an olive branch to the erstwhile rebels, UEFA has entered into discussions with two private equity funds to raise as much as 6 billion euros in rescue financing for European clubs. The money would be borrowed against future revenues, including the billions produced annually by the Champions League, and provided to clubs through a type of rating system based on their likelihood of repaying it through appearance in the biggest competitions.