Home » Sport » Chile Goalkeeper Equal to the Task, if Not to the Team

Chile Goalkeeper Equal to the Task, if Not to the Team

PARIS — The construction of Christiane Endler’s masterpiece started days ago. Hours of work had gone into an action that would pass in the blink of an eye: all the time Chile’s goalkeeper spent studying how the United States likes to attack, identifying the types of threats she was likely to face, making sure she was forewarned, and forearmed.

She noticed — together with her coaches — that the United States, the reigning world champion, has a tendency to sling crosses into the box, seeking deft, flicked headers at the near post designed to pick out a target at the far. That was Step 1: Know your enemy.

Step 2 was to work out how to stop it: long, arduous, repetitive sessions on Chile’s training field just outside Paris, in which Endler honed how to move her feet quickly enough that she could get back across her goal, watching the ball as it bounced from one head to the next, how to time her leap when the attempt to breach her defenses finally comes.

Greatness has its roots, ultimately, in groundwork. Endler was ready, then, when — midway through the second half of Chile’s Women’s World Cup match on Sunday — Mallory Pugh looked up from her post on the right wing. The United States was three goals ahead by then; the game had long been over, if it had ever even started.

The pressure was mounting, Jill Ellis’s players sensing blood, just as they had done against Thailand. Endler had been busy in the previous few minutes, sprawling to deny Lindsey Horan, flinging herself to her left to keep out a spectacular volley from Christen Press, hurling her body to her right to try to meet Jessica McDonald’s effort, heaving a sigh of relief as it clattered against the post. It is easy to lose concentration under such an onslaught, to forget all that preparation.

Endler did not. Pugh’s ball came in. It found McDonald, in the center of the Chilean box. She touched it on to Press, waiting at the far post: just as Endler had foreseen.

“We worked a lot on it,” she said afterward, trying to explain what happened next.

Press, in the moment, felt as if she made good contact with the header, though she admitted later that only when she had watched it back would she be sure.

“It can be hard when you’re on the field,” she said. “I’ll watch it back and see if the finishes are good enough. But I did feel I was hitting the ball well.”

She was. Her header was firm, well placed, steered toward the far-right corner of Endler’s goal. Carli Lloyd — who already had scored twice, and would miss a penalty a few minutes later — described it as an “in-the-goal” opportunity. It looked like a sure thing. Endler was still scrambling across, shifting her feet. The goalkeeper’s hands get all the attention, but often, it’s the feet that do a lot of the work.

It looked as if it was too late by the time she leapt. The ball was traveling past her. As she stretched out her right arm, she arched her back, reaching behind her. Just as the ball seemed to be crossing the line, Endler curled her fingers around it, and clawed it away.

Press, McDonald, Pugh — everyone in the stadium — needed a minute to compute it. “It was fantastic, spectacular,” Ellis said: of that save, of everything else Endler did. “She is one of the best shot-stoppers I have ever seen.”

Endler was a little more humble. “A bit of intuition and reflexes,” she said when asked how she had managed it. 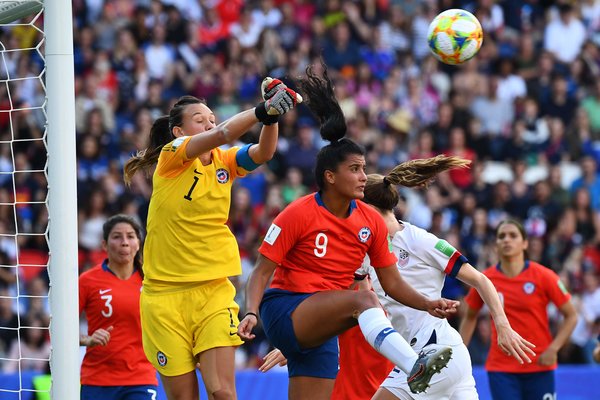 It is unusual, Ellis noted, that a player whose team lost, 3-0, should end up being voted the best on the field. In this case, though, nobody was arguing. “None at all,” Ellis said. She could, of course, afford to be magnanimous. “You can enjoy saves like that at 3-0 up,” she said.

With the game in the balance, they might be rather more frustrating. When the honor for Endler was announced to the crowd — just shy of 45,000 — at the Parc des Princes, everyone applauded; even those waving the Stars and Stripes, even those who had come in full expectation of another rout.

They should not have been too disappointed. The dominance of the United States was no less than it had been against Thailand a few days ago, a game in which Ellis’s team broke records, and hearts. Endler — Chilean women’s soccer’s standard-bearer, its lone world-class performer — had been called on to make her first save after only 90 seconds.

She made her second almost immediately after. She had made four stops by the time she had been on the field at the Parc des Princes — her home turf; she plays professionally for Paris St.-Germain — for three minutes. Ellis had changed almost her entire team for this game. She used it as an opportunity to give all of her squad playing time, to give those players who are in France as reserves a taste of the World Cup. It made no difference at all.

It was obvious, almost immediately, that this was not going to be a contest in any meaningful sense of the term, other than between the American forward line and the 27-year-old from Hijuelas that stood in its way. More than the sophistication and the purpose, it was the intensity with which the United States played that Chile simply could not handle, the coldblooded ruthlessness with which Ellis’s players seized on mistakes, pried open gaps, exploited weaknesses. By the end, Chile had mustered one shot on goal. The United States had 26.

Three of them — two from Lloyd, one from Julie Ertz, all in the first half — found their way past Endler. McDonald hit the post, and Lloyd hit the bar and then missed a penalty kick. That there were not more goals, that this did not turn into another massacre, the sort that prompts questions about the value and the morals of running up the score, is down, almost exclusively, to Endler.

Almost everything the most devastating attack in this tournament threw at her, she handled. Ellis described it as a “wonderful statement” about the standard of goalkeeping; more than that, it was powerful proof of just how important having a world-class goalkeeper can be. “A player like that can always keep a team in the mix,” Ellis said.

After each of the United States goals, Endler called her teammates together for a huddle on the edge of Chile’s box. She issued instructions, offered encouragement, perhaps listed a few complaints. She wanted them to help her as much as they could.

They did not let her down; Lloyd made a point of congratulating her opponents on their performance, their spirit. The 3-0 score, given the disparity in resources, will count as something of a triumph for Chile; victory against Thailand in its final game could yet bring a place in the last 16. Should that happen, should Chile exceed all expectations, it will be down, in no small part, to Endler, to all of the work she has put in, to all of the study, all of the training, all of the intuition, and all of the reflexes: everything that went into this performance, everything that went into that save, all of the unseen work that makes up a masterpiece.

Rory Smith is the chief soccer correspondent, based in Manchester, England. He covers all aspects of European soccer and has reported from three World Cups, the Olympics, and numerous European tournaments. @RorySmith