PARIS — Coco Gauff has already played in the second week at Roland Garros. The junior tournaments are held during that period, and she won the French Open girls title here in 2018.

Though she is still young enough to be eligible for the juniors and has friends who are taking part in them this year, those days are gone for Gauff at 17.

Her talent, drive and precocity have put her on the brink of the top 20, and though she did not get to showcase her game for long on Saturday against Jennifer Brady, it comes as no surprise that Gauff is in the second week of the main event this year.

“I think you can tell that I’m improving and making smarter decisions on the court,” Gauff said.

She will face Ons Jabeur in the fourth round on Monday. Gauff has already reached the fourth round at Wimbledon and the Australian Open. She called her first week in Paris probably her “most professional” at a Grand Slam tournament.

“No unnecessary three-set matches and stuff like that,” she said.

That is in part because she has minimized two of her recurring issues: forehand errors and double faults. But she only had to play one set on Saturday, and it lasted just 19 minutes as Brady, a serious threat, struggled to move without pain because of plantar fasciitis and retired in tears after the opening set.

The 13th-seeded Brady, a former U.C.L.A. star, reached the United States Open semifinals last year and the Australian Open final this year. But her foot problem, which she said could also be linked to a bone bruise, caused her to withdraw from the Italian Open last month. Plantar fasciitis can be tricky and can take a long time to resolve. Though she went to Germany for treatment and ultimately decided to play in the French Open, she could manage to play only two full singles matches despite a high tolerance for pain in general.

“I have tolerated a lot of pain,” she said of her foot. “I walked out there obviously thinking I was going to finish the match, win the match. It just never got any better. Not that it was getting better in other matches, but it wasn’t really bearable anymore.”

Brady is not the only leading player now in a race against the clock to heal in time for Wimbledon. Taylor Fritz, at No. 33 the top-ranked American man, tore a meniscus in the second round of the French Open, leaving the court in a wheelchair. He will undergo surgery but still intends to try to return for Wimbledon, which begins June 28 on grass at the All England Club.

That was where Gauff burst into to prominence as a 15-year-old qualifier in 2019, when, in her first singles match at a Grand Slam tournament, she defeated Venus Williams and then proved it had been no fluke with two more victories before losing to the eventual champion, Simona Halep. Gauff won her first tour title later that year, and though the tour’s five-month hiatus in 2020 slowed her (and everyone) down, she is on the way back up.

“I think people put such high expectations on her after her coming-out party at Wimbledon,” Brad Stine, Brady’s new coach, said of Gauff. “Everybody thought she would make this meteoric rise, and that didn’t exactly happen, but she’s been making very steady progress, and she’s still so young. She’s going deeper and deeper at these kinds of tournaments and continuing to put pressure on the top players, and I think she’s definitely on the path to being someone who will be contending at the top level for a long time.” 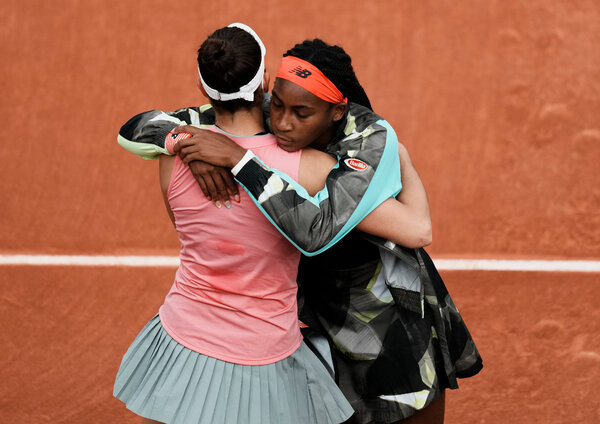 She is a great mover in general, one of the quickest players in women’s tennis. But clay, which requires specific footwork and frequent sliding, can blunt some players’ speed. Not Gauff’s. When she won her second career tour singles title last month in Parma, Italy, she continually rebooted points that few could have, slicing forehands back into play from extreme positions and chasing down good drop shots. She did more of the same against Brady in their brief encounter.

“I think the most important on clay, at least in my perspective, is just your movement,” Gauff said. “If you feel comfortable moving, everything else will kind of come along with it.”

Stine helped coach Jim Courier when he won back-to-back French Open men’s titles in 1991 and 1992. “You need to be able to slide to the ball when you need to and recover and maintain balance and be able to hit out of those positions,” Stine said. “Coco looks very comfortable, and she seems to be reading the game really well, too, moving to the right spots.”

From an early age, Gauff played regularly on green clay near home in Delray Beach, Fla. She won her first United States Tennis Association national junior title on clay in the 12-and-under division when she was just 10. That same year, she began training regularly in France on red clay at the Mouratoglou Tennis Academy, whose owner, Patrick Mouratoglou, has helped finance Gauff’s career. He also coaches Serena Williams.

Gauff, who is studying French, has a strong connection to France and to the surface most closely associated with the country, even if there are more hardcourts than clay courts in France.

“I have been spending at least six weeks of the year — even more, in some years — on clay,” Gauff said. “So I think it kind of just gives me a familiar vibe, something that maybe other American players don’t have, because in the U.S. we don’t really have red clay.”

She has plenty of American company in the fourth round, however. Sloane Stephens, a former U.S. Open champion and French Open finalist who has dropped to 59th in the rankings, continued her revival, defeating the No. 18 seed Karolina Muchova, 6-3, 7-5, on Saturday. The No. 4 seed Sofia Kenin, a finalist at Roland Garros last year who has struggled this season, defeated the American Jessica Pegula, 4-6, 6-1, 6-4, in a match full of drop shots, service breaks and tension.

Serena Williams, the fourth American woman in the round of 16, will play Elena Rybakina of Kazakhstan on Sunday.

Gauff’s second week at Roland Garros begins Monday against Jabeur, a flashy Tunisian with a deep affinity for clay and for drop shots.