Cricket, lawn bowls, mixed martial arts, squash and softball have declared their desire to take part in the 2032 Olympic Games, which look destined to take place in Brisbane.

On Thursday the International Olympic Committee announced Brisbane was the preferred candidate to host the 2032 event, entering into exclusive discussions with Australian bid organisers to bring the Olympics down under for the third time. 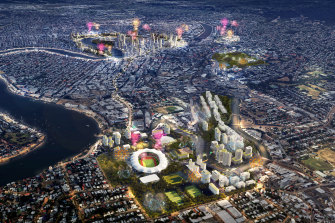 The proposed Brisbane Olympic Stadium at Albion with the proposed Olympic venues lit in the background.Credit:Urbis

The news has sparked interest among several sports as they begin to jockey for a seat at the table at one of the planet’s biggest sporting events.

A Cricket Australia spokesman said the governing body was delighted to hear the news about the Brisbane bid, saying CA hoped cricket could be one of the sports the host nation’s Olympic Committee recommends for inclusion in Brisbane.

“We will absolutely work closely with the Queensland Olympic Council to ensure cricket is front of mind,” the spokesman said.

“Cricket is a truly national sport here in Australia and it would just be fantastic to see our sport represented at the Olympics, whatever the format may be. That dream of representing your country and even winning an Olympic gold medal could become a reality for many of our junior cricketers.

“Introducing sports familiar to the host nation will be critical to engaging fans, and we’ve seen that for this year’s Olympics in Tokyo with the additions of sports more familiar to the Japanese audience.” 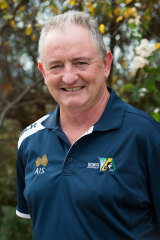 Bowls Australia chief executive Neil Dalrymple is convinced his sport has a place at the Games, saying Brisbane would be the ideal entry point.

Bowls is still a heavily Commonwealth-based sport but is growing fast in China, Malaysia and Hong Kong, while it proved a drawcard during the 2018 Commonwealth Games on the Gold Coast with Broadbeach Bowls Club turning into a vibrant location.

“As a host country, bowls is intrinsic to Australian society and the bonus is that our facilities are exceptional, especially in Queensland,” Dalrymple said.“[For the Paralympics] bowls as a sport can be modified very easily to allow people with different disabilities to play it.”

Squash has been knocking on the Olympic door for over a decade, with 20 million players around the world, an established professional world tour and events in the Commonwealth Games, Pan American Games and Asian Games. Squash Australia chief executive Robert Donaghue said squash was a modern sport.

“It’s a sport that does suit the way people are playing sport now which is a short, sharp fitness-orientated sport where you get a decent workout,” Squash Australia chief executive Donaghue said.

“I know as part of the bid for the recent Olympic Games, the two current world champions said they would give up their six or seven world championships just to compete for an Olympic gold medal.”

Meanwhile, Australian netball great Liz Ellis says her sport shouldn’t be left out of consideration for the Olympics despite it being almost solely played in Commonwealth countries and having only a developing men’s component.

Ellis, who led a review of the sport last year, said netball had evolved significantly in the past 20 years with a broader array of countries in women’s international play and a men’s game which was among the fastest growing sports in Australia.

“The sport has to ensure it’s prepared to sing its own praises,” Ellis said.“Sometimes we are very humble but we should be out there shouting that we are developing netballers through Africa, there are plenty of international players in Super Netball and Super League in England.”