Emma McKeon has claimed a bronze medal in the 100m butterfly after a shock victory by Margaret MacNeil from Canada in lane seven.

McKeon qualified third fastest for the final but her heat swim of 55.82 on Saturday evening was only 0.34 outside Sarah Sjoestroem’s world record. 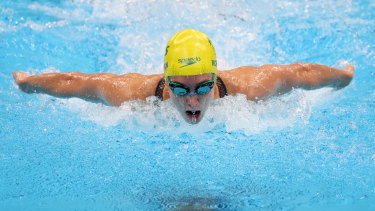 Sjoestroem fractured her elbow in February after slipping and falling on ice in Stockholm. She required surgery. Her recovery was supposed to be three months and in June Sjoestroem admitted she was “doubtful” of racing in this event.

To finish seventh was an achievement in itself.

The medal was McKeon’s second of the Games – putting her on track for an ambitious haul of seven medals if all things go to plan.

At 12.20pm, the race all of Australia has been waiting for – Ariarne Titmus against Katie Ledecky – will play out.

The pair have a fierce rivalry, stemming from Titmus’s brilliant victory in the 400m freestyle over Ledecky at the 2019 world championships.

Both posted similar times in their respective heats, with Ledecky touching the wall in 4:00.45 and Titmus in 4:01.66.

Titmus has the fastest time of the year but Ledecky is one of the greatest swimmers the sport has seen and will be eager to spoil the Australian’s hopes of a maiden Olympic gold medal in the event.