Both Karsten Warholm of Norway and Rai Benjamin of the United States broke the previous world record in the 400-meter hurdles at the Tokyo Olympics. 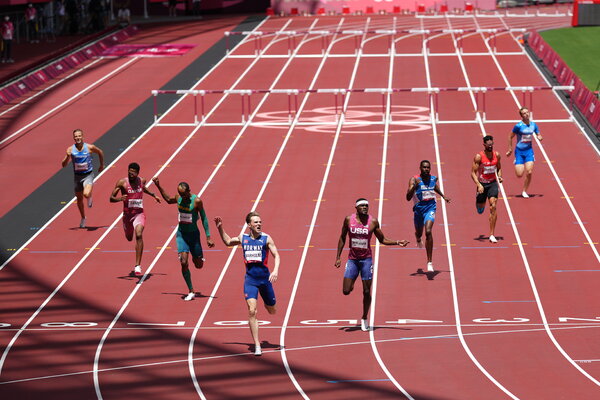 TOKYO — Karsten Warholm could not feel his legs as he closed on the finish line. An accumulation of lactic acid is expected, and typically causes great discomfort for world-class athletes. But in this instance, as he chased his first Olympic title, Warholm pushed himself somewhere else entirely, where the pain was replaced by a sort of absence.

The result was one of the great races in Olympic history. Warholm, a 25-year-old Norwegian who grew up training to become a decathlete, obliterated his own world record in the men’s 400-meter hurdles, winning in 45.94 seconds at the Tokyo Games on Tuesday. Rai Benjamin of the United States was second in 46.17 seconds, a time that also eclipsed Warholm’s previous world record but was not good enough for gold.

Where to begin? Not so long ago, the world record had stood for nearly 29 years. In the past five weeks, Warholm went under that mark twice. His time on Tuesday was faster than 18 of the 48 Olympians who competed here in qualifying for the men’s 400 meters — the race without a series of 10 hurdles in the way. (Benjamin was faster than 14 of them.)

And then there were the seven men who finished behind Warholm — five national records among them. Alison dos Santos of Brazil took the bronze in 46.72 seconds, a South American record and the fourth-fastest time in history. Each would have been a generational talent if they were not a part of the same generation.

“Everyone in this event should be getting paid big bucks,” Benjamin said. “And I think it’s only going to get better next year and the year after.”

Warholm and Benjamin wound up in the same semifinal heat on Sunday, their first time going head-to-head since 2019, when Warholm edged Benjamin to defend his world championship.

Both men eased through the finish — Warholm less than a tenth of a second ahead of Benjamin — as they conserved energy for the final, a showdown they had been anticipating for years.

Warholm was restless, too, though he has a knack for creating an appearance of easy confidence. He slaps his chest and his face before his races, leaving red marks on his body — a dramatic prelude to the event itself, which he attacks with raw ferocity. But all the theatrics tend to camouflage his true feelings, he said, and it was no different before Tuesday’s final.

“I ran sort of scared,” he said, “and that’s something that I always do.”

As the fastest qualifier out of the semifinals, Warholm got to pick his lane. He chose Lane 6, just to the outside of Benjamin in Lane 5. Warholm prefers a more gradual curve of the track, he said, but it also meant that he would not be able to see Benjamin for much of the race, if at all. All Warholm could control was his effort. And he wanted to go out hard, he said, to create “stress” among the other runners.

He could sense that he had succeeded coming out of the first turn when he began to make up the stagger on dos Santos and Abderrahman Samba of Qatar, both of whom he could spot to his outside.

Kyron McMaster of the British Virgin Islands had to tell himself to stay composed against the likes of Warholm and Benjamin. Too often, he said, “if you go after them, it’s suicidal.”

Benjamin got off to a strong start but said he mistimed his steps before the fourth hurdle, a nearly imperceptible mistake that slowed his momentum and proved costly.

“This event is just so unforgiving,” he said.

Still, Benjamin appeared to be gaining on Warholm coming out of the final turn before Warholm found some energy in reserve. When his time flashed on the scoreboard, he ripped his jersey open and screamed.

“I would have died for that gold medal today,” he said.

There has been a lot of speculation at the Games about the impact of a fast racing surface and improvements in footwear technology. Warholm has a carbon plate in his spikes that he said was the result of a joint effort between Puma and the Mercedes-AMG Petronas Formula 1 team, while Benjamin wears one of the futuristic Nike spikes.

“I have a great shoe,” Warholm said. “It was important to make a shoe that gives credibility to the results, so we tried to make the plate as thin as possible.”

He suggested that Nike had crossed the line with the design of its shoes. Warholm called it a “trampoline” and used another word not suitable for print.

As for the track? “It’s a very great track,” Warholm said. “But I think it’s not just the track. I think it’s the guys, as well.”

One of those guys was McMaster, who finished fourth. He said he felt no disappointment over missing the medal podium. Last year, after the Olympic postponement, he had contemplated retirement. But he has since drawn on the camaraderie of competition and rediscovered his passion for the sport, he said.

It is no small thing, McMaster said, to share the stage with the fastest men in the event’s history. On Tuesday, he was simply grateful to be a part of it at all.