EXCLUSIVE: England v France is OFF

England’s World Cup clash with France in Yokohama on Saturday is off – the first time in the 32-year history of the tournament that a fixture will be cancelled.

With super typhoon Hagibis set to rage through Tokyo and surrounding areas this weekend, tournament organisers are due to announce contingency plans on Thursday. However, Sportsmail understands that ‘Le Crunch’ will be abandoned.

The fixture was due to take place at Yokohama Stadium on Saturday evening, at around the time that Hagibis is expected to pass through the area, wreaking havoc. The tropical storm is being classified as ‘violent’ by Japanese meteorologists, with wind speeds likely to exceed 160mph. 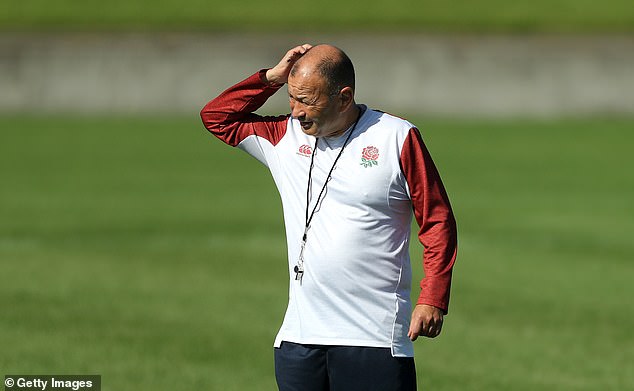 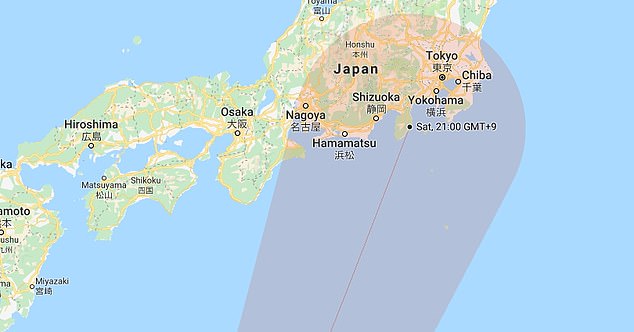 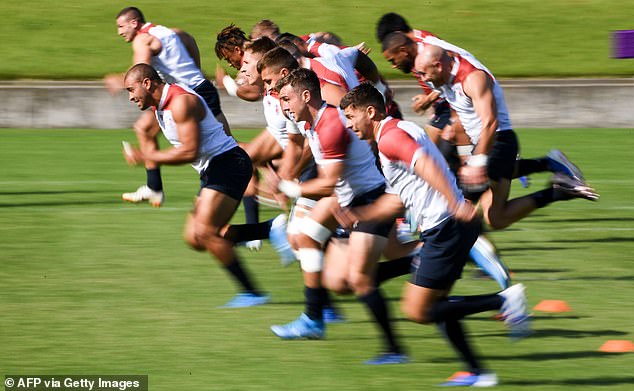 World Rugby were poised to decide in the early hours on Thursday – UK time – if the Pool C fixture would go ahead as planned, or whether there would be an enforced change of time or venue.

It emerged on Wednesday that the initial contingency plan was to take the England-France fixture to Oita, in the southern island of Kyushu – where both teams will play quarter-finals next week. However, it appears that logistical problems have forced officials to abandon that option.

There was a mounting sense of chaos and confusion on Wednesday night in Japan as teams, supporters and media were left in the dark about what will happen this weekend. Rumours were rife about disruption affecting four countries in particular; England, France, Japan and Scotland.

There was growing speculation that both matches in Yokohama; ‘Le Crunch’ on Saturday and Japan v Scotland the following day, were set to be cancelled.

Yet, there were contrasting rumours that the latter match may be put back until Monday. However, Sportsmail understands that England v France is certainly being called off. 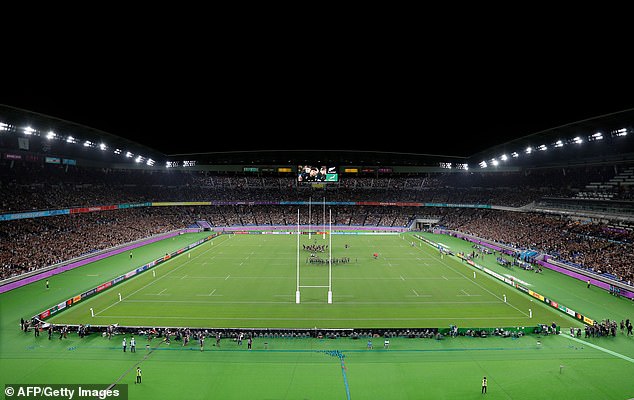 England currently top Pool C, and would stay there if the game is recorded as a 0-0 draw

If that fixture and Japan v Scotland matches were cancelled at short notice, in theory that would mean both would be classified as scoreless draws, with each team receiving two points.

While that would not significantly impact England and France, who have both already clinched quarter-final places, it would have a major bearing on the three-way tussle for qualification from Pool A, between Japan, Scotland and Ireland.

World Rugby have emphasised their priority commitment to the safety of participants and spectators, but they will also be desperate to avoid a World Cup match being cancelled for the first time in the 32-year history of the tournament. 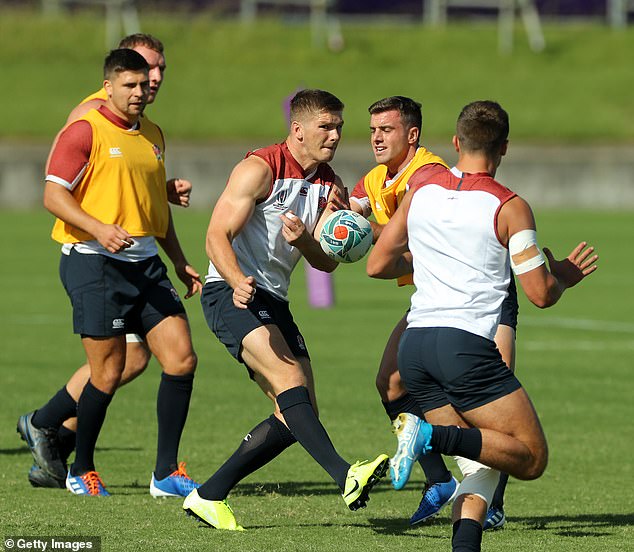 England will now qualify in top spot in their pool, and will likely face Australia in the last eight

While the governing body claim to have insurance which covers such freak occurrences, the loss of two fixtures at the 70,000-capacity Yokohama would lead to losses estimated at approximately £30million.

Last month, typhoon Faxai caused considerable damage and led to transport chaos in and around Tokyo, and that was not on the scale of Hagibis, which means ‘velocity’.

While Tokyo was preparing for the latest storm – with early indications that the vast, busy rail network would shut down this weekend – there were also two earthquakes under the city, measuring 4.5 and 3.5 on the Richter scale. They could be felt in the Shinjuku district, where the England team are based until Friday.

The Red Rose management and logistical staff are understood to have been in regular contact with tournament officials, to prepare for all eventualities. There was a concerted attempt to play down the threat of what is coming. 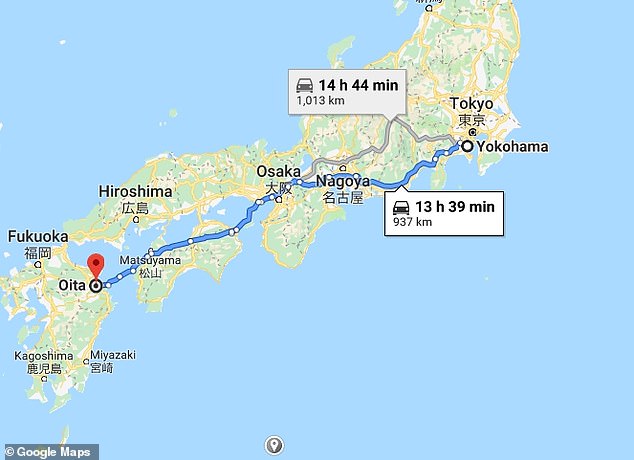 RWC chiefs wanted to try to relocate the game to Oita, 500 miles away from Yokohama

Despite the magnitude of the storm, defence coach John Mitchell said: ‘I think people are making it bigger than what it actually is. It’s just weather. At the end of the day, we’ve got a game of rugby to play and wherever it’s going to be played, we’ll deal with it. Whatever is thrown at us, we’ll deal with it. We’ll look forward to dealing with it.

‘It is important to understand all the permutations and plan for those permutations. Should a decision be made, we can act. We’ve definitely got awareness of the permutations, but we feel that whatever decision is made, we’ll adapt to anything.

‘We’ll just wait and see. Unless we’ve got something definite, we won’t communicate anything otherwise to our players. We’re preparing to play France at the moment in Yokohama and that’s how we see it, so we won’t be giving any information to our players that’s not really definite.’ 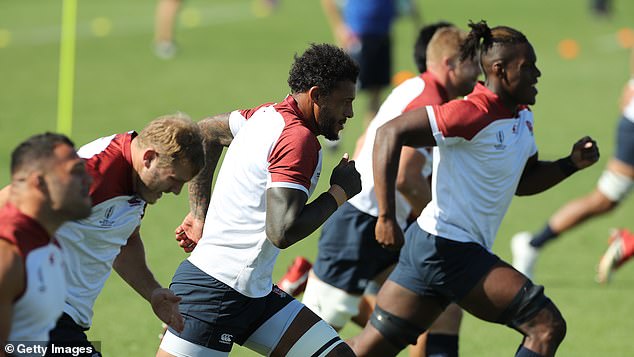 Presumably, definitive information has begun to seep through to the England players. While they will finish top of their pool in the event of the cancellation being officially confirmed, this is not an ideal scenario for the Red Rose camp.

It means that they face the threat of going into a likely quarter-final against Australia in Oita next Saturday under-cooked.

England’s last match – last Saturday – became a procession to victory over 14-man Argentina, once Tomas Lavanini had been sent off for a high tackle on Owen Farrell.

Following earlier, routine pool victories over Tier 2 sides Tonga and the USA, it means that the national team won’t have been significantly tested at this tournament, and won’t have played for a fortnight before they take on the Wallabies. It is not the way they would have wished to prepare for such a momentous encounter.

END_OF_DOCUMENT_TOKEN_TO_BE_REPLACED

LOVE Island fans has been left completely baffled after they spotted twins Jess and Eve drying their lips and eyelashes with a hairdryer. Eve was

Former Geordie Shore star Charlotte Crosby has ended things with her I'm a Celebrity… Get Me Out of Here! Australia co-star Ryan Gallagher. The Sunderland

Russia: Iran was spooked by reports of U.S. F-35s when it downed airliner

MOSCOW (Reuters) – Russian Foreign Minister Sergei Lavrov said on Friday that Iran’s accidental shooting down of a Ukrainian airliner last week occurred at a time when Tehran was spooked by reports of advanced U.S. stealth fighters in the area. “There were at least six (U.S.) F-35 fighters in the

END_OF_DOCUMENT_TOKEN_TO_BE_REPLACED

Hundreds of thousands of fish have been suffocated after ash from the Australian wildfires washed into the Macleay River in New South Wales. Piles of dead fish were seen washed up on the river’s banks and turned over in the body of water, located in Bellbrook. Local resident Arthur Bain

END_OF_DOCUMENT_TOKEN_TO_BE_REPLACED

END_OF_DOCUMENT_TOKEN_TO_BE_REPLACED
Recent Posts
We and our partners use cookies on this site to improve our service, perform analytics, personalize advertising, measure advertising performance, and remember website preferences.Ok