If the cover-up was to work, Danil Lysenko realized far too late, he had better familiarize himself with the Moscow hospital where Russian track and field officials had insisted he had undergone a battery of medical tests.

The details mattered. The tests were the centerpiece of Russia’s explanation for why antidoping officials had been unable to locate Lysenko in the spring of 2018.

The punishment mattered, too: Athletes found guilty of so-called whereabouts failures — effectively failing to make themselves available for random drug tests — can face suspensions of up to two years. Those caught lying, falsifying documents or obstructing investigators risked even worse. Either sanction, though, would most likely keep Lysenko, a talented high jumper who has just turned 21, from representing Russia at the Tokyo Olympics.

So in September 2018, fearing investigators were closing in on the truth, the nervous high jumper sent an email to a top Russian track official, asking if he could provide photographs of the hospital, so at least the athlete would know how to describe it if anyone asked. Then, accompanied by the same official, he drove to the address listed on the hospital’s website. When the car stopped and Lysenko looked around, he was stunned.

There was no hospital. There wasn’t even a building. All he could see was a construction site.

This was going to be harder to explain.

In the nearly five years since Russia’s huge, state-sponsored doping program was revealed, journalists, doping officials and investigators have uncovered one scandal after another. Samples passed through a hole in a laboratory wall. Doping results that disappeared. Broken agreements. Shifting explanations. Willing accomplices.

Yet even by Russian standards, the story of the frantic — and ultimately failed — effort to explain Danil Lysenko’s whereabouts to track and field’s governing body may be in a class by itself.

The Clinic That Wasn’t

Track and field investigators said the building at the Moscow address of a fake testing clinic had been demolished in 2017. This image of the site, shown on Google Maps, was taken in 2019.

The hospital was a lie. So were the tests and the excuses and even the names of the doctors on Lysenko’s medical reports. By the time the scheme fell apart, it involved a half-dozen top Russian track officials and an Olympic hopeful who could clear a two-meter high-jump bar but couldn’t hold up under questioning.

On Wednesday, investigators from track and field’s investigative body — the Athletics Integrity Unit — published the full details of their investigation in the Lysenko case. The report underscored not only how brazen Russia could be in its efforts to obstruct antidoping investigations, and how top Russian officials often played an integral role in such schemes, but also the lengths sporting bodies must go to ferret out false information.

The scandal has already led to the resignation of the entire board of Russia’s track and field federation, and it is one of the main reasons Russia remains suspended from track and field, even as the country continues to wage a legal fight to smooth its re-entry into world sports. Track and field is the only major sport that continues to punish Russia for its doping scheme; it has, for example, limited to 10 the number of Russians who can compete in this summer’s Olympics.

The former president at Russia’s track and field federation, Dmitry Shlyakhtin, and the organization’s executive director, Alexander Parkin, were among five top officials banned for between four and six years this week for their roles in the case. Lysenko, who has been suspended since 2018, now faces a ban of up to eight years. His coach could soon be suspended, too. 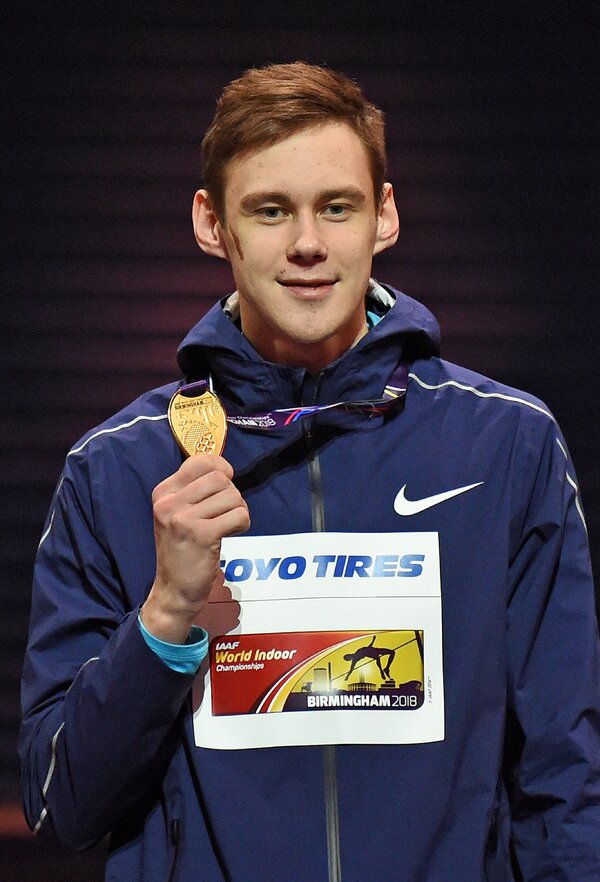 The investigation’s conclusion was hailed as the latest success of the A.I.U., a unit created in 2017 after the revelation that track and field’s former leadership had been paid millions to cover up failed Russian doping tests.

Financed by a subsidy of $8 million — 12 percent of the annual budget of track and field’s global governing body, World Athletics — the group includes former intelligence officials and has taken on cases involving some of the highest-profile athletes in an effort to restore track and field’s credibility. In October last year, for example, its work led to the suspension of the American sprinter Christian Coleman, the reigning 100-meter world champion, for whereabouts failures, derailing his hopes of Olympic gold.

The Lysenko case has been heralded as one of the unit’s biggest successes yet.

“These are offenses of the utmost seriousness committed by persons right at the top of RusAF, a World Athletics federation,” the tribunal that oversaw the case wrote in its finding. “It appears that most if not all of the senior management of RusAF were involved in this major fraud. This is quite shocking.”

As part of its investigation, the A.I.U. said, it interviewed 22 witnesses, translated 7,000 documents and secured six terabytes of data linked to the case after seizing telephones and computer hard drives used by Lysenko and Russian federation officials.

By restoring files that had been hurriedly deleted before the handover, including emails and voice messages that were sent on platforms like WhatsApp, the investigators were able to recreate the frantic behind-the-scenes effort to help Lysenko escape censure. Presented with that timeline, which documented the cover-up in the words and actions of its own athlete and officials, the Russian athletics federation agreed to plead guilty last year and pay a $10 million fine.

The plan to protect Lysenko began in July 2018, after he missed a doping test and then twice failed to account for his location in a computer system created to help drug testers find elite athletes at any time. Lysenko had explained to Russian track officials that his two whereabouts failures in 2018 had been the result of, first, ill health and then his involvement in a car crash.

Investigators told him they did not believe him.

According to the summary of the case, after Lysenko and his coach, Evgeny Zagorulko, were summoned to a meeting with Russian track officials to explain the accusations, Zagorulko contacted Artur Karamyan, a board member of the Russian track federation, to ask if a false medical certificate could be procured to bolster the high jumper’s story. Rather than report the effort to create a falsified document for use in a doping case, Karamyan provided one the next day.

The track and field investigators promptly demanded the athlete’s full medical records, as well as contact information for the doctors who had treated him. That led to a frenzied round of calls, text messages and emails between the Russians, and eventually produced a request that Lysenko arrange to have a series of tests and scans taken — wherever he was — that could be used to stand in for the ones he had claimed to have undergone in Moscow.

Lysenko took the tests in August 2018 at a facility in his hometown, Birsk, where he was training at the time, and then, pressed by the federation president, Shlyakhtin, immediately sent the results back to Moscow. When they arrived, officials ensured they were backdated and made to look as if they had come from the fictional facility — now named the SD Clinic in the paperwork — and Lysenko passed the documents on to world track officials.

But Lysenko appeared to be getting nervous. In early September, he emailed Karamyan, the board member tasked with overseeing the deception and asked for the details of the clinic.

“Hello!” Lysenko wrote, according to the investigators’ translated version. Could Karamyan send a few photos of clinic, he asked, just so he knew what it looked like?

Three weeks later Lysenko, accompanied by Karamyan, drove to the address on the clinic’s website, only to find there was no facility at the address. The building that once stood there, investigators later confirmed, had been demolished in 2017, months before Lysenko claimed he had been treated in it.

“The conclusions of the investigation were that the SD Clinic did not exist,” the report said. (The clinic’s website was also fake; investigators later confirmed it was populated with photographs of at least two unrelated buildings.) The investigators also concluded that the medical explanation for Lysenko’s initial whereabouts failure — an attack of appendicitis — “was false and supported by fabricated documents.” The timeline for his second whereabouts failure, the car accident, didn’t add up, either.

With his story falling apart, and now facing an additional charge of tampering with evidence, Lysenko told his American lawyer, Paul Greene, about the effort to deceive investigators. Greene, according to the documents, advised Lysenko to tell the A.I.U. the truth about the conspiracy or he would withdraw from his case.

Lysenko refused, the report said, and Greene ended their relationship. Greene, citing attorney client privilege, declined to comment on his work with Lysenko.

In April 2019, during an interview with the A.I.U., Lysenko — now represented by a Russian lawyer who had once represented the Russian track federation — tried to stick to his story. Eventually, though, as investigators picked holes in account, Lysenko broke.

“Mr. Lysenko admitted that the documents and explanations that he had provided to the A.I.U. relating to his medical explanation and his stay at the SD Clinic were false and fabricated, and that ‘people from the federation’ had helped him create the story,” the tribunal report said.

The decision to fabricate the story and the evidence, Lysenko told the investigators, had been agreed to by all involved.