FC Barcelona’s summer of chaos continues despite Lionel Messi agreeing to stay, with club directors now threatening to quit over another transfer saga 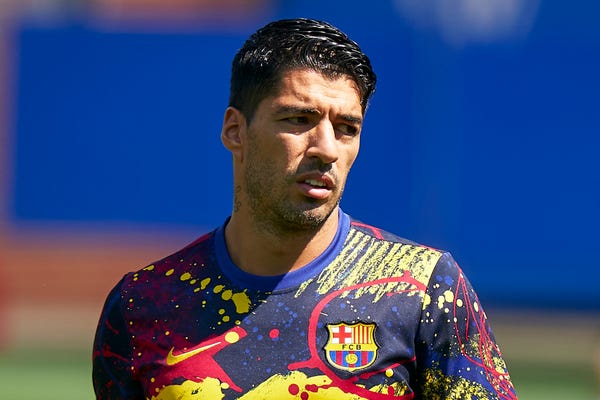 FC Barcelona's turbulent summer is not yet over despite Lionel Messi agreeing to stay at the club, with its directors now threatening to quit over the sale of star striker Luis Suarez to Atletico Madrid.

Barcelona agreed to let Suarez join the Madrid side on Tuesday, according to the BBC, with the Uruguayan forward agreeing terms on a reduced salary to force through the move.

The 33-year-old's move to Atletico was originally blocked by Barca president Josep Maria Bartomeu because he did not wish to sell to a rival club.

However, after Suarez told Barcelona he would air his grievances to the media should he be forced to stay, the club backed down.

Atletico will pay no more than $6 million for Suarez, who scored 198 goals in 283 appearances during his time at the Camp Nou, winning four La Liga titles and the Champions League.

Onda Cero now reports that the decision to allow Suarez to join Atletico has caused a split in the Barcelona boardroom, with a number of the club's directors considering resigning.

Six Barcelona board members already quit the club earlier this month after penning a strongly worded letter to Bartomeu stating their displeasure at the club's direction in recent years, according to Goal.

Bartomeu has been heavily criticized for changing Barcelona's philosophy since being appointed as president in 2014, with the Spaniard relying heavily on expensive transfers and aging players while failing to invest in the club's hallowed youth academy, "La Masia."

After Lionel Messi announced his intention to leave Barcelona in August, hundreds of the club's fans took to the streets to demand Bartomeu stepped down from his position.

Barcelona's next presidential elections will take place in March 2021. Bartomeu has said he will not seek re-election, reports Goal.

END_OF_DOCUMENT_TOKEN_TO_BE_REPLACED

END_OF_DOCUMENT_TOKEN_TO_BE_REPLACED
Recent Posts
We and our partners use cookies on this site to improve our service, perform analytics, personalize advertising, measure advertising performance, and remember website preferences.Ok