Germany Adds a 1-0 Victory Over China to Its Run

The teenage midfielder Giulia Gwinn scored a second-half winner as Germany, a two-time champion, opened its Women’s World Cup campaign by beating a rugged China, 1-0, on Saturday in Rennes, France.

Gwinn’s powerful 66th-minute shot from the edge of the penalty area flew through the legs of a jumping Chinese defender into the left corner of the net. The ball fell to her after China failed to properly clear a corner floated in from the right.

In an even first half at Roazhon Park, Germany defender Carolin Simon hit the crossbar and China striker Yang Li hit the post. 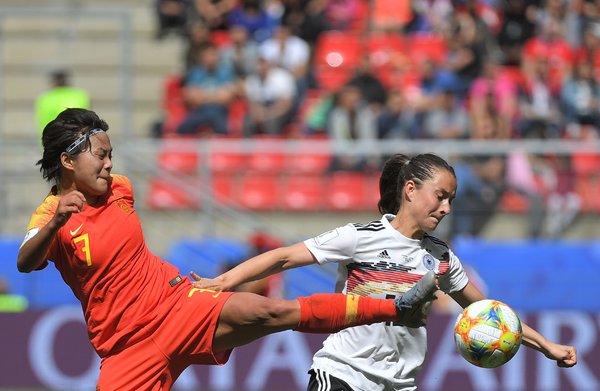 China played aggressively and, to the annoyance of the Germans at times, physically. But it failed to take advantage of pressure it created in the second half, and eventually was punished by Gwinn, who will not turn 20 until the tournament’s final week.

Germany won its last title in 2007 and next faces South Africa in Group B on June 17 in the southern city of Montpellier. The Germans are unbeaten in 13 matches, the longest current run of any team in the field.

China, the runner-up to the United States in 1999, plays Spain the same day in the northern port city of Le Havre.

MARTA OUT FOR BRAZIL’S OPENER Brazil forward Marta will not start her team’s opening game against Jamaica at the Women’s World Cup because of a thigh problem, Brazil’s coach, Vadão, said. “She has been recovering better than expected but she cannot start,” Vadão said at a news conference a day before the game in Grenoble. “Maybe she will be on the bench, but our plan is that she doesn’t take part in the game.” The 33-year-old Marta, a former FIFA player of the year, picked up the injury during her team’s preparations for the World Cup late last month. (Reuters)