CLEVELAND — Gerrit Cole was one pitch better than Shane Bieber in a heavyweight matchup of aces as Rougned Odor and Aaron Hicks homered off Cleveland’s Cy Young Award winner in the fifth inning, giving the Yankees a 2-1 win over Cleveland on Saturday.

Cole (3-1) struck out 11 and allowed just three hits in seven innings to beat Bieber (2-2) in a rematch of their meeting in last year’s playoffs. Cole’s 50 strikeouts in his first five starts are the most for any pitcher in the Yankees’ storied history.

Bieber fanned nine — the first time he hasn’t reached double digits in five starts — and tied the Hall of Famer Randy Johnson’s record with his 17th straight start of at least eight strikeouts.

The 25-year-old Bieber allowed just three hits, but two were homers while throwing a career-high 119 pitches.

After Cole was pulled following his 111th pitch, Justin Wilson got two outs in the eighth. With closer Aroldis Chapman unavailable after pitching three times in four days, Jonathan Loaisiga came on and finished up for his first career save.

The Yankees’ bullpen has pitched nine and a third scoreless innings in the series.

The Yankees won their third straight in the four-game series after stumbling into Progressive Field with the A.L.’s worst record.

Two of baseball’s best, Cole and Bieber traded pitch for pitch, strike for strike and strikeout for strikeout over seven innings.

Bieber was hoping to avoid the same fate as his matchup with Cole last September, when the Yankees battered the eventual Cy Young winner in Game 1 of the wild-card round opener for seven runs in 4 ⅔ innings as New York won 12-3.

That outing stuck with Bieber over the winter, fueling him.

“A sour taste,” he said Friday. 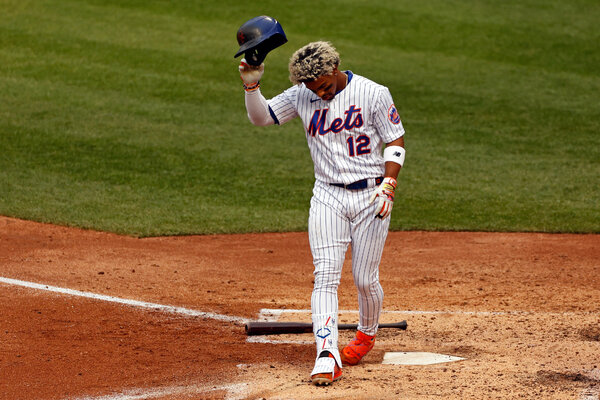 Joe Ross rebounded from the worst outing of his career by pitching six solid innings and helping himself with an R.B.I. single as the Washington Nationals beat the Mets, 7-1, on Saturday.

Ross allowed five hits and one walk while striking out four. He gave up 10 runs in four and a third innings against St. Louis on Monday.

The 27-year-old right-hander, who opted out last season because of coronavirus concerns, said it was easier to recover from the poor performance because of how he fared in his first two starts, when he tossed 11 scoreless innings against the Cardinals and Dodgers.

“I think starting off well probably made it a little bit easier,” Ross said. “Also, it’s one game. One not great game, can kind of shake that off. If it’s two or three in a row, it might be different.”

The Mets threatened after Michael Conforto’s homer off the right-field foul pole in the fourth inning, but after giving up infield singles to J.D. Davis and Jeff McNeil, Ross came back from a 3-1 count to get James McCann to line out.

The scuffling Mets got just one more runner into scoring position against Ross (2-1) and a trio of relievers.

“Our biggest thing has been hitting with runners in scoring position,” Manager Luis Rojas said of the Mets, who are batting .190 in such situations. “It just hasn’t happened enough.”

Yadiel Hernandez, a 33-year-old rookie who entered with six hits in 36 career at-bats, had two hits and two R.B.I. for the Nationals. Six starters had an R.B.I. and seven players got a hit for Washington, which finished with 10 singles and no extra-base hits but drew five walks and a hit by pitch.

“Any time you’ve got people on base, you’re putting pressure on the other side,” second baseman Josh Harrison said.

“I don’t dwell on any of them, but it was eight singles, balls that were hit in holes,” Stroman said. “It was just one of those starts that could have went either way.”