There was a very good reason behind Giants rookie Teigan O’Shannassy getting her first taste of Super Netball action when she was pitchforked into the round five match against the Sunshine Coast Lightning.

Even though the Giants suffered a heavy defeat against the defending premiers, stepping onto the court was a special moment for the 20-year-old whose previous eight months had been ruined by a ruptured Achilles tendon. 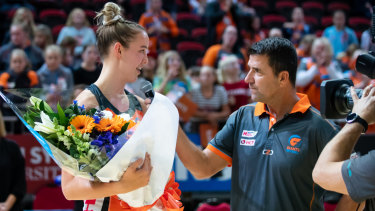 However, coach Julie Fitzgerald revealed the reason why she threw the talented defender into the fray for a few minutes was to re-enforce the need for O’Shannassy to always “be prepared.”

“Playing her [against the Lightning] was as much to show her a little bit of what it’s like, as it was to remind her she has to be prepared to take the court no matter what,” said Fitzgerald. “Teigan is a star of the future. She has a long way to go, but she has a very good future.

“She has the ability to read the ball coming down the court, and she knows how to get her hands on it. Teigan knows how to win ball back and – once she’s fit and strong – that’s what we need.

Plenty more minutes on court await O’Shannassy, hopefully for her when Giants face West Coast Fever on Saturday, but her debut was a significant step following a tough recovery from the injury she suffered while playing in a series of games in New Zealand last August.

While she stayed off her feet as the tendon healed, O’Shannassy maintained her fitness by following a rigorous programme which included boxing while sitting in a chair, gruelling cycling sessions, toughing it out on the grinder machine, swimming and other strength-based exercises.

O’Shannassy says she’s never been stronger as a result of the work, but admitted it was a genuine test of faith when she no longer needed to wear the moon boot because she feared her Achilles mightn’t cope when she did such things as push up on her toes.

“I’m still coming back from rehab,” said O’Shannassy of her progress. “I’m wanting to get to a point where I’m confident in my ability and my body.

“I’ve only played two and a half games since last August, so I want to get some more game time and improve. I really want to get back out and show what I can do. [My debut] was fun; very exciting. But, it went pretty quickly. I can’t remember much but it was a big step for me.

“[The speed of Super Netball] was a lot faster than what I expected, and while I wish [my time on the court] could have been longer I can’t wait to get out there again.”

After spending two years as a training partner at the Giants – training full-time with the team in the hope they’ll get game time – O’Shannassy learnt plenty about the dedication that’s needed to thrive in the rough and tumble of elite netball.

“You learn a lot about commitment,” she said of life as a training partner. “You need to sacrifice a lot. You also realise it’s important to have balance, that you need more in life than netball. Sometimes as a training partner you can get caught up in going to everything. It becomes netball, netball, netball, but you learn from the older players that once you leave [training] you focus on something else; you need to have a life away from sport.”

O’Shannassy, who studies nutrition at university, says her mother Kelli has been a constant source of support. They also share the unique distinction of representing Australia in the Youth World Cup, with Kelli competing in the 1988 tournament and Teigan in 2017.

“Mum has been great,” said O’Shannassy, who won a silver medal in Botswana. “I know I can always rely on her to give me an honest answer and feedback. Sometimes it’s what I don’t want to hear, but deep down I know it’s good to get.”