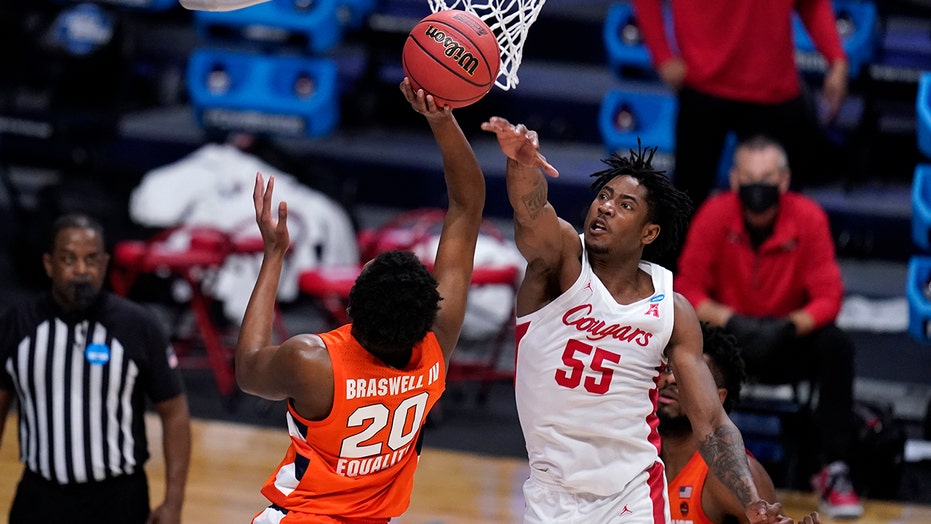 Quentin Grimes scored 14 points while Houston’s defense locked down on surging Buddy Boeheim, helping the Cougars beat Syracuse 62-46 on Saturday night in the Sweet 16 of the NCAA Tournament.

Justin Gorham had 13 points and 10 rebounds for the second-seeded Cougars, who pushed through to their first trip to a regional final in 37 years, earning a matchup with Oregon State for the Midwest Region title and a spot in the Final Four.

The Cougars also got a strong all-around effort from DeJon Jarreau, who finished with nine points, eight rebounds and eight assists while leading the defensive effort that kept Boeheim in check — and ultimately derailed the 11th-seeded Orange’s latest postseason push as a double-digit seed.

The focus was making every look difficult for Hall of Fame coach Jim Boeheim’s son, who had been on an absolute tear through four games in the Atlantic Coast Conference and NCAA Tournament games to earn the nickname “Buddy Buckets.”

The 6-foot-6 junior had averaged 28.3 points through those games, which included him shooting 60% from the floor and 55.8% from 3-point range.

Jarreau spent much of the night chasing Boeheim, hovering in his shadow on the perimeter, staying right on his hip on drives and swiping at the ball as Boeheim secured catches. Boeheim managed just one first-half basket and finished with 12 points on 3-for-13 shooting, including 1 for 9 from 3-point range.

And the Orange couldn’t muster much of anything else, either.

As for Kelvin Sampson’s Cougars, it marks the school’s first trip to a regional final since reaching a second straight NCAA championship game in 1984 with Hakeem Olajuwon and coach Guy Lewis during the famed “Phi Slama Jama” era.