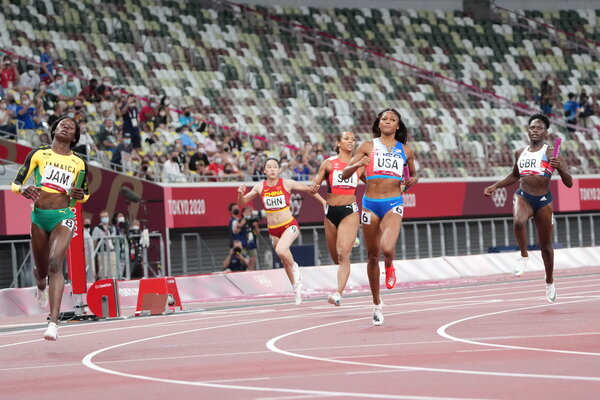 The Jamaican women put an exclamation point on their domination of Olympic sprinting Friday night, winning the women’s 4×100 relay in a race whose outcome seemed predetermined from the start.

As long as the Jamaicans could take care of the baton and get it safely around the track — never a guarantee — it appeared nearly impossible for them to lose. They missed the world record by just two-tenths of a second and ran the second fastest time in history.

Jamaica’s closest competition came from the United States, the defending gold medalists in the race and always a formidable foe. But there were no holdovers from that side to the one that ran the finals in Tokyo, and the team featured just one other woman who had won a medal at these Games, Gabrielle Thomas. The Americans took the silver, finishing in 41.45.

In the men’s race, Italy stunned the field, riding the speed of 100-meter champion Lamont Marcell Jacobs to edge Britain by one-hundredth of a second to take the gold medal.

Andre De Grasse of Canada, the 200-meter champion, blazed an anchor leg and got his group to the finish line beating out China for the bronze medal. Jamaica’s men, who were unbeatable in this race for years during Usain Bolt’s career, could do no better than sixth.

This was Italy’s first triumph in the sprint relay, an event that European nations have rarely excelled at.

The United States team was not in the final because of a mistake during the baton handoff in an earlier heat and because, well, they did not run fast enough.