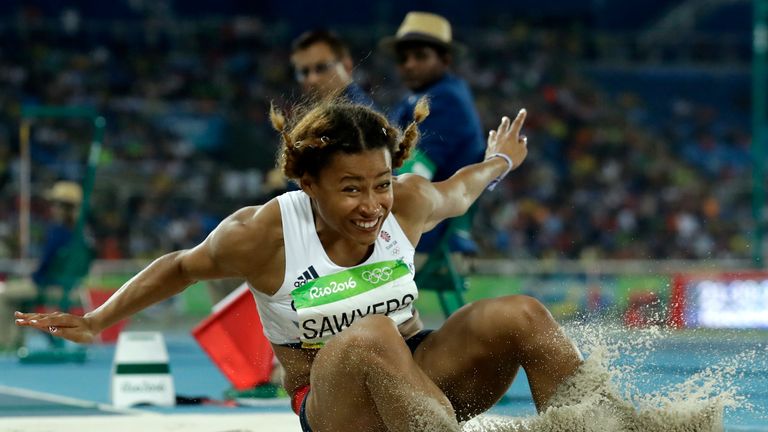 Jazmin Sawyers is adamant that blocking out news over uncertainty surrounding the Tokyo Olympics is the best way to help mentally prepare for the Games, with the long jumper convinced that the added preparation time has worked in her favour.

Doubt has been cast over the status of the Games just over six months prior to its rescheduled July 23 start date, most recently due to a one-month state of emergency being declared in the Japanese capital over a dramatic rise in coronavirus cases and concern over the new variant.

Despite this, and a temporary ban on foreign nationals entering Japan, Tokyo 2020 spokesperson Masa Takaya has told Sky Sports News he is confident the first postponed Olympics will be delivered this summer. The debate over whether to vaccinate competitors ahead of July is also ongoing.

Athletes across the world have experienced huge adjustments to their training programmes after the Games were postponed last year, having to deal with unexpected hurdles that would not typically be in the way during an Olympic cycle.

Sawyers, who has been unable to see her coach for the past 11 months and cannot return to her usual training base in Florida due to pandemic restrictions, concedes that the build-up has been “far from ideal” but believes an extra year of preparation prior to the Games has proved advantageous. She told Sky Sports News: “I’m trying not to even look at it [news around Tokyo] because I know whatever the outcome is, I can’t control it.

“My only job at the minute is to prepare for the Games as best as I possibly can.

“If that changes, then I’ll change my plan but for now I’m trying not to look at what everybody is saying about it because however much I read it, however much I stress myself out over it, it doesn’t change a thing.

“I’m sure that whatever the right decision is will be made but I don’t have a say in that. All I can do as an athlete is just train as hard as I possibly can, put the work in, take advantage of an extra year of preparation that I’ve got and keep my fingers crossed that it goes ahead.

“Because everything is planned in this four-year cycle, it did disrupt things initially but then everybody has had to adapt, so it’s not as if somebody was prepared for this five-year cycle. “The disruption to training is across the board but I do think it’s a good thing because in my career, I’m still on the up.

“I’m still improving, I don’t think I’ve hit my peak in my career and so to have an extra year which means I’ll be closer to the peak, for me, is a big thumbs up.

“It means I’ve had an extra year to get fitter, faster and stronger and I’ve spent this winter trying to do those things.”

‘I can’t take qualification for granted’

Sawyers reached the final at Rio 2016 and was the highest-placed Brit in the women’s long jump on her Olympic debut, clearing 6.69m to achieve an eighth-placed finish for Team GB.

The 2014 Commonwealth Games silver medallist is also buoyed by a second British Athletics Championships success in Manchester last September where she won with another 6.69m leap.

Sawyers is approaching the height of her powers and is aiming to conquer the seven-metre jump barrier in 2021, which she has come up short of previously.

Another British Athletics Championships win this June would seal Sawyers’ Team GB spot for Tokyo, but despite the confidence that prior success has brought the 26-year-old, she remains wary of overcomplacency.

“Having done well in the Championships last year, it has really filled me with confidence to go ahead this year and think that I can jump well. Let’s retain the title and get myself a ticket on that plane,” she said.

“The aim is to beat my placement from last time at the Olympics.

“Every time I go to the Championship, I’m looking to win a medal.

“My training is going to be geared towards that, I don’t know what it will take, I think it will take seven metres so my big goal for the year is to have a seven-metre season and finally cross that elusive barrier.

“But the goal initially is just to get there [to the Olympics] because one of the hardest competitions of the year is the British Championships.

“If we don’t take the trials seriously enough, then I’m not even going to be there on the start line in Tokyo.”

Many people have used the extended free time presented by lockdown to participate in new activities and Sawyers is no stranger to pursuing interests outside of the sandpit.

She competed in the heptathlon at the 2011 World Youth Championships and even placed at silver in bobsleigh during the Winter Youth Olympics in 2012.

But away from the track, field, and ice, Sawyers is also an eager singer-songwriter and took part in The Voice in 2017 where she impressed enough to secure programme judge Will.i.am as her coach during the blind auditions.

She also recorded the official Team England song for the 2018 Commonwealth Games in Australia, a rendition of ‘Jerusalem’, alongside Britain’s Got Talent winner Tokio Myers.

After her training sessions in Loughborough, the GB long jumper is adding another skill to her repertoire by practicing guitar to complement her critically acclaimed vocals.

“The singing has been really fun [during lockdown], I’ve tried to improve my guitar playing skills because they are significantly below mediocre,” she said.

'New Girl' – I covered Ed Sheeran's 'New Man' and changed the lyrics up a bit…this was lots of fun, hope you enjoy! pic.twitter.com/yIsoH1Dhfc

“I’ve learned to braid my own hair which is a skill that I hope will save me a lot of money over the years, I’ve learned to make clothes which is really fun and so different from track and field.

“It has definitely been a nice opportunity to learn a few new things.

“But also, I don’t want anyone to feel bad if they didn’t, everybody thinks that this time has to be about being productive and learning new skills and adding a string to your bow but it has been so stressful for so many people that I think everyone should just get a pat on the back for making it through.”

Despite not being able to return to her usual Florida training base at the moment, Sawyers acknowledges that in the context of a global pandemic, many other athletes are in less fortunate positions than her, struggling mentally and logistically with alterations to training programmes and with even being unable to train at all. 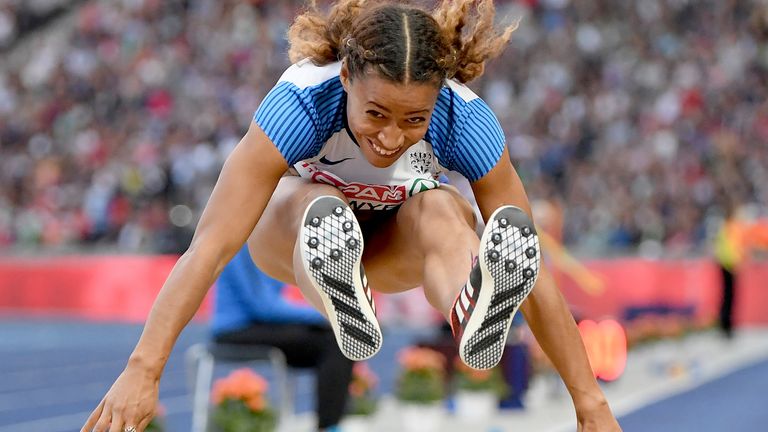 I’ve been really lucky that I’ve been able to train because there are some people who are trying to build a track and field career who haven’t been able to get out onto a track since before the first lockdown.

She added: “I think it’s completely expected that people have been struggling over lockdown, I’ve been really lucky that I’ve been able to train because there are some people who are trying to build a track and field career who haven’t been able to get out onto a track since before the first lockdown.

“It’s expected that this would be difficult. Don’t be too hard on yourself and go easy, it’s great if you can do something super productive and find a way to make your training work inside the house.

“But if you can’t, then these are certainly the most exceptional circumstances we’ll ever be in. If you’re finding it a bit too much, then just give yourself permission to take a step back.

“If this lockdown and this pandemic has taught me anything – as much as athletics is the one thing which I am so passionate about – there is more to life than sport.

“Sport is not the most important thing in the world, it is keeping the people that we love safe, and I think this has shown all of us that more than anything.

“All the things we thought were right at the top of the priority list might actually just slip to second.”