CONOR McGREGOR has been taunted by Khabib Nurmagomedov's manager as the pair ensured there would be no Christmas cheer this year. 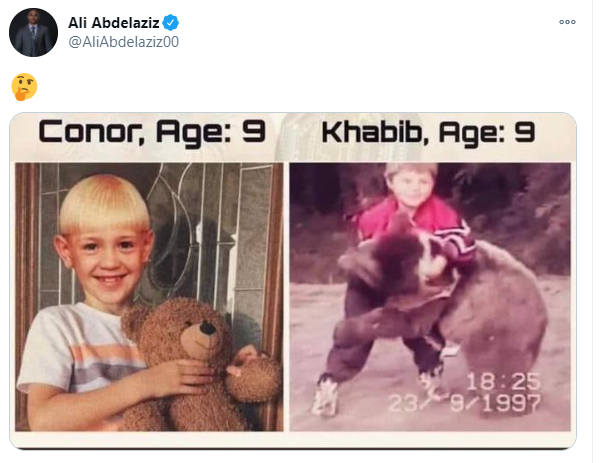 Opposite was a snap of Khabib allegedly at the same age wrestling a real bear.

Abdelaziz's jibe came after McGregor traded some verbals on Twitter with Khabib's manager.

The Irishman's tweets have since been deleted.

Abdelaziz was not impressed being called out by McGregor, tweeting: "You said to Khabib in the cage only business. Go get an IV and sober up because we know you drunk or high."

The undefeated fighter tweeted that he would 'smash this chicken' as the rivalry continues to heat up.

But it appears McGregor is only interested in bagging a rematch against Khabib.

It comes as UFC chief White revealed he will meet Nurmagomedov on the week of McGregor's return to the octagon.

The Irishman rematches Dustin Poirier – who he beat in 2014 – in Abu Dhabi on January 23.

Nurmagomedov, 32, will join McGregor in the Middle East, with his training partner Omari Akhmedov also featuring on Fight Island.

And there, UFC boss White will attempt to talk Khabib out of retirement.

Meanwhile Justin Bieber said McGregor looked 'like a superhero' as the bulky UFC star posed with his family at Christmas.

The Irishman also appeared to announce that he was expecting his third child, with Jr holding up a baby scan.

And according to pop royalty JB, McGregor is now superdad after revealing his amazing frame.

Bieber, 26, commented: “Bro, you literally look like a superhero."

McGregor, who has also been called out for a fight by YouTuber Jake Paul, responded: "Just your friendly neighbourhood JackedMan."

END_OF_DOCUMENT_TOKEN_TO_BE_REPLACED

END_OF_DOCUMENT_TOKEN_TO_BE_REPLACED
Recent Posts
We and our partners use cookies on this site to improve our service, perform analytics, personalize advertising, measure advertising performance, and remember website preferences.Ok