Home » Sport » Manchester United Slows City’s March, but Only for a Day

Manchester United Slows City’s March, but Only for a Day

MANCHESTER, England — Manchester United will recognize this feeling, the evanescent satisfaction of a battle won far too late in the day to have any hope of turning the tide of the war, the curious and complex pride that comes from celebrating a victory that highlights only how far you have fallen.

It is only three years, after all, since United experienced pretty much the same thing, in pretty much the same place, if not quite in the same circumstances. Manchester City was supposed to claim the Premier League title that afternoon — the first of Pep Guardiola’s reign — at home against its rival, neighbor and longtime persecutor in the spring of 2018.

The Etihad Stadium was packed and boisterous, relishing the prospect of the perfect scenario for clinching the championship, with United invited to play the part first of sacrificial victim, and then unwilling observer. What better way, after all, could there be to illustrate the power shift in Manchester, in England, and in Europe, than for City to win the league as United was forced to watch?

United, that day, proved recalcitrant guests. Guardiola’s team raced into a two-goal lead, and then hesitated, a brief flash of the old City, the one practiced in the art of snatching defeat from the jaws of victory, bubbling up to infect the new. United took advantage, surged back and won.

It was clear and obvious at the time that this was a mere postponement of City’s celebrations — even José Mourinho, the United manager, congratulated Guardiola on his looming title win after the game — rather than a threatened cancellation. All concerned knew that City would be proclaimed champion, with ease, sooner rather than later. But for United victory was a tonic, a solace, a shot across the bow, something to hold onto in the long night of the blue moon.

Sunday was not quite a carbon copy. The details were a little different, for a start. It is much earlier in the season, for one, and City remains some way from having the championship mathematically sealed. The Etihad did not need to be silenced: Like every other stadium across Europe, it has been quiet for a year now, the noise and emotion of the fans an increasingly distant and sorrowful memory. 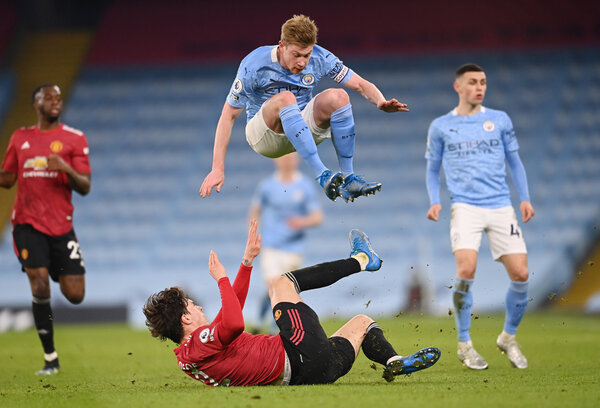 The effect, though, was much the same. United won a penalty inside 38 seconds, Bruno Fernandes converted it within two minutes, and then Ole Gunnar Solskjaer’s team set about holding City at arm’s length. Early in the second half, Luke Shaw doubled United’s lead. Anthony Martial might have made it three, but the damage was done. For the day, at least.

The extent of the damage will not, in all likelihood, extend beyond that. The 21-game winning run that preceded this result, City’s first defeat since November, makes the Premier League title a foregone conclusion. Guardiola’s team still holds an 11-point lead at the top of the table, with 10 games to play.

This loss would need to presage a collapse that is all but unimaginable to prevent Guardiola’s claiming a third championship in four years. United can, once again, claim parochial primacy, but it is not enough to change the map of English soccer’s broader landscape.

A few days earlier, United had been flat and uninspired — and a little fortunate — to take a goalless draw at Crystal Palace. Solskjaer’s players had only won twice in the Premier League since January, their stuttering form masked by the stuttering form of, well, everyone else, and in particular the apparently bottomless incompetence of Liverpool. This is not likely to be a corner turned. For United, victory in the derby was a welcome outcome, but nothing more, not really.

But that does not mean this was a game devoid of significance. For City, certainly, it would be worth pausing to reflect not only on the fact of defeat, but the nature of it. Its loss in this fixture in 2018 was sandwiched by two losses to Liverpool in the Champions League, one comprehensive, one narrow and unfortunate, but both enough to end the club’s hopes of winning its first European crown.

With the league title all but in hand now, that is where Guardiola’s focus will shift in the coming weeks. There are two domestic cups to be won, too, but it is that Champions League trophy that Guardiola — and much of City’s hierarchy — craves more than any other, that trophy which they believe will complete the club’s transformation into true European aristocracy.

It has been hard, over the last couple of months, to see who might realistically stop City. Real Madrid and Barcelona are shadows of what they once were. Atlético Madrid is tiring, fast. The reigning champion, Bayern Munich, has developed a curious habit of giving almost all of its opponents a two-goal head start. Paris St.-Germain is undermined by inconsistency. No club has been quite so imperious this season as City; it is hardly bold to claim that this is, currently, and defeat notwithstanding, the best team in Europe.

All of those teams, then, will have welcomed United’s victory as proof that City is not invincible. They will have seen glimpses that, for all the resources that Guardiola has access to and for all that he has managed them expertly through this compact, condensed campaign, City’s players are not immune to fatigue. Kevin de Bruyne, in particular, seemed unable to influence this game as he would have wished.

Rivals will have taken heart from the first 20 minutes or so, when City repeatedly played its way into trouble, unable to find its rhythm, or to piece together United’s plan. And, most of all, they will have noted how Solskjaer — an underrated tactician in games of this ilk — neutralized João Cancelo, the fullback who becomes a midfield playmaker and, in doing so, makes this iteration of City tick.

Solskjaer’s antidote was a simple but nerveless one. He instructed Marcus Rashford to play high and wide on United’s left, forcing Cancelo into a choice: either come into midfield and leave space to exploit, or stay in his lane, and defang his own team’s attack. He chose both, and neither: It was no surprise that both of United’s goals originated on his side.

Cancelo has been one of City’s great strengths this season. His role has been the innovation that has re-energized Guardiola’s system. On Sunday at the Etihad, Solskjaer turned him into what City has seemed to lack for weeks and for months: a weakness. It will make not the slightest difference to the destiny of the Premier League title race, of course. Most teams will lack the personnel or the inclination to be able to repeat the trick.

But for those sides across Europe who stand in the way of Manchester City and a clean sweep of all four trophies, it will be something more than a solace, more than a tonic. For Guardiola, and for City, it is a reminder and a warning, that so high are their sights that one battle lost can cost the entire war.