The judge overseeing the landmark N.F.L. concussion settlement ordered a mediator to look into concerns about the league’s use of separate scoring curves — one for Black athletes, another for white players — used by doctors to evaluate dementia-related claims that retired players say “explicitly and deliberately” discriminated against hundreds if not thousands of Black players.

The mediation between the N.F.L. and the lawyers representing the 20,000 or so retired players covered in the settlement comes after two retired Black players, Kevin Henry and Najeh Davenport, filed a civil rights suit and a suit against the settlement in August that called for an end to the practice of race-normed benchmarks to assess their claims of dementia and Alzheimer’s disease. Both cases were dismissed but lawyers for the two players are planning to appeal.

Their allegation of systematic discrimination shined a harsh light on the settlement reached in 2015. The payouts from the settlement have since been plagued by delays, predatory lenders, accusations of fraud and a lack of transparency. Criticisms of the race-based evaluation policies come at a critical time for the N.F.L., as it seeks to address racial inequity and social concerns raised by Black players, who make up about 70 percent of active players on the league’s rosters.

After the suits were filed, four members of Congress requested data from the N.F.L. to determine if Black players were being discriminated against. (The N.F.L. declined to share.) Last month, an ABC News report included correspondence between doctors hired to evaluate retired players in which the neuropsychologists raised concerns that race-norming discriminated against Black players. This month, more than a dozen wives of Black retired N.F.L. players sent the judge a petition with nearly 50,000 signatures calling for an end to race-norming.

For now, the mediation keeps alive their complaints alive.

The judge overseeing the settlement, Anita B. Brody of the U.S. District Court for the Eastern District of Pennsylvania, dismissed the lawsuits because they were an “improper collateral attack” on the settlement. Brody expressed concern about the race-based benchmarks the league’s doctors use, but provided no specifics to guide the mediator, who must “address the concerns relating to the race-norming issue.”

A magistrate judge will serve as mediator between the N.F.L. and Christopher Seeger, the lead lawyer for the plaintiffs who represents the entire class of 20,000 or so retired players. There is no timeline for the sides to reach any agreement.

Lawyers for Henry and Davenport, as well as the wives of former players, expressed doubt that Seeger will fairly represent Black players’ interests in the mediation. The N.F.L. and Seeger, they said, introduced the use of race-norming into the settlement agreement in 2017 and have no incentive to admit now that it is flawed.

“We are deeply concerned that the Court’s proposed solution is to order the very parties who created this discriminatory system to negotiate a fix,” said Cyril Smith, a lawyer for Henry and Davenport. “The class of Black former players whom we represent must have a seat at the table and a transparent process, so that we are not back in the same place four years from now dealing with another fatally flawed settlement.” 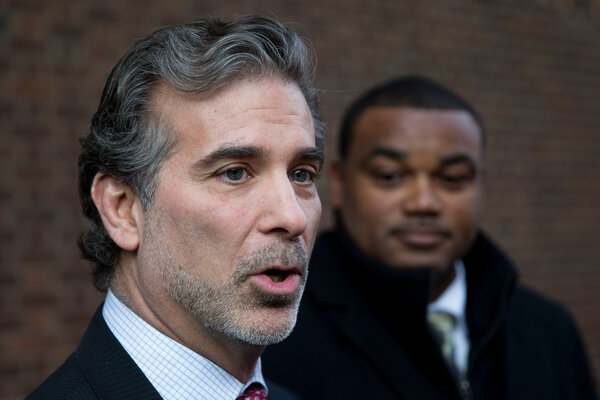 Amy Lewis, whose husband, Ken Jenkins, played in the N.F.L., was equally skeptical. Leaving the N.F.L. and Seeger to work out an agreement is “giving the fox another chance to guard the hen house,” she said in a letter to Judge Brody sent on behalf of more than a dozen other wives of N.F.L. players. “How can any of us have any faith that the violating parties are not going to, once again, bury this and deny civil rights to our husbands?”

Lewis said the group would ask the Department of Justice and Congress to launch an investigation into “civil rights violations and possible collusion” between the N.F.L. and Seeger.

In a statement, Seeger said he has “not seen any evidence of racial bias in the settlement program,” but “continues to review claims to determine if any claim was inappropriately denied as a result of application of these adjustments.”

But he said that race-based demographic adjustments should be scrapped and players who had their claims denied because of race-norming should have their tests scored again without the race-based adjustments if there was evidence of discrimination.

“This means eliminated and gone from the settlement,” Seeger said in a statement.

Some lawyers remain skeptical that Seeger, who previously denied the existence of any discrimination, will push the N.F.L. hard enough to re-evaluate the scores of the thousands of Black players who have been tested and may not even know why they were excluded, a process that could lead to hundreds of players eventually qualifying for payments each potentially worth hundreds of thousands of dollars.

“It’s not hard to do, but it could be expensive for the N.F.L.,” said Justin Wyatt, who represents more than 100 retired players in the settlement. “We need to search for where people have been discriminated against, and that means rescoring every African-American player. It’s incumbent on us to make sure this process is discrimination-free.”

Senator Ron Wyden of Oregon, who with Senator Cory Booker of New Jersey and two members of the House asked the N.F.L. for data on race-norming, said “the league has failed to produce a shred of scientific evidence supporting the absurd claim that using this race-based formula somehow helps Black former players, instead of unfairly preventing them from getting benefits.”

He added: “The N.F.L. is out of excuses — it needs to drop this racist formula immediately.”

Thus far, the N.F.L. has paid more than $765 million to 1,189 players with dementia, Alzheimer’s disease and other cognitive and neurological diseases. However, far more players have had their claims denied, audited or withdrawn, including about 70 percent of the claims for dementia.

In a statement, the N.F.L. said it was pleased with the judge’s decision to dismiss the cases and looked forward to working with the mediator, Magistrate Judge David R. Strawbridge, “to address the Court’s concerns.”