Netball NSW chief executive Tain Drinkwater has called on the state government to provide financial assistance after the Giants and the Swifts were forced to travel across four states in just over three weeks due to COVID-19.

The NSW clubs were originally relocated from NSW to Queensland on June 23 due to the Sydney outbreak, before being moved to Victoria a week later due to an outbreak in Queensland.

This week, with COVID cases on the rise in Melbourne and another lockdown looming in Victoria, Netball Australia established an Adelaide hub for seven of the eight teams – forcing the NSW sides to move once again.

The Melbourne Vixens, Collingwood Magpies, and the NSW clubs all left Victoria on Thursday, while the Queensland Firebirds and Sunshine Coast Lightning are yet to receive exemptions to be allowed into Adelaide.

Drinkwater said the NSW clubs had been hit hard by the relocations.

“It’s an enormous financial impact for Netball NSW,” she said. “It’s certainly significant and certainly something we will be approaching the minister about. 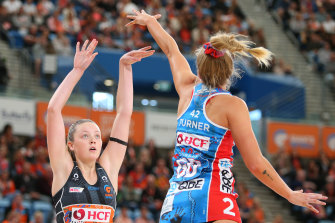 The Swifts and Giants have spent the last three weeks moving across the country. Credit:Getty

“When you consider the funding the NRL and AFL receive, we want to have a voice and develop a compelling case for greater investment in our sport.”

Drinkwater said if greater investment did not come from the government after this difficult period, netball as a whole would be impacted in the long term.

“I’m accountable to every single organisation and club and every single person who pays their money for a registration fee. I need to be able to look those people in the eye and really hand over heart know that I’m giving them a return,” she said.

The Swifts and Giants have spent the past three weeks in hotel isolation with a number of staff and players travelling with children.

Swifts coach Briony Akle travelled to Queensland with her four sons but has since been forced to split her family up and take just two of her children to Melbourne and now to Adelaide.

Giants star April Brandley has been travelling with two-year-old son Clay, with five children between the ages of two and 12 between the two clubs.

In May, the Giants also underwent five days hotel quarantine in Perth ahead of a clash against the West Coast Fever, after border rules changed mid-flight.

“We are acutely aware of it. Unbelievably aware of it,” Tain said of the effects of the extended periods in hotel quarantine on players.

“Sacrifices are made at such varying levels but at the end of the day, they are all sacrifices. We are mindful of it. They have been nothing short of phenomenal in terms of still continuing the competition and we will continue to support them as best as we possibly can.”