Netherlands 3-1 England: Gareth Southgate will not abandon style despite errors 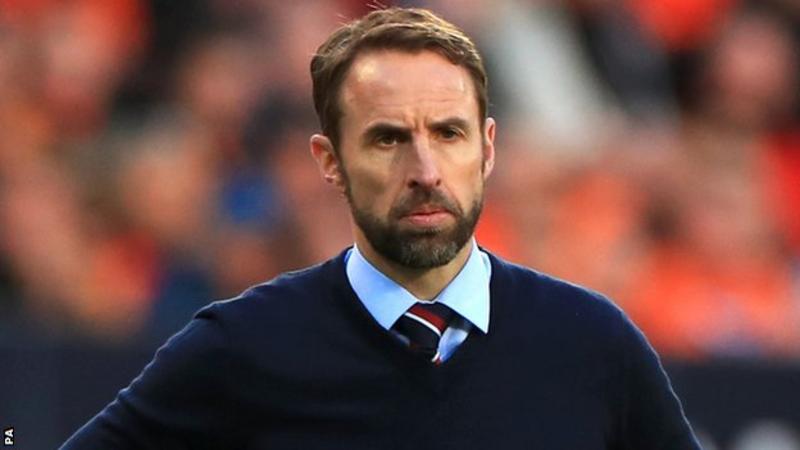 England boss Gareth Southgate says he will not abandon his playing principles despite the errors that cost his side a place in the Nations League final.

Mistakes by John Stones and Ross Barkley led to two extra-time goals for the Netherlands after the sides drew 1-1 in normal time.

But Southgate was adamant his side are capable of playing possession football.

“I’m asking them to play a tough game at the back – if we didn’t play that way we wouldn’t be here,” he said.

“We didn’t lose because of how we wanted to play; we lost because of poor execution and fatigue.

“It wasn’t just the two goals, we made errors and gave opportunities which should have been punished before that.”

Stones and Barkley both gifted the Netherlands possession deep inside their own half and Southgate says his players can usually make those passes “no problem”.

“Ross had gone down with cramp moments before [the third goal] and the Dutch pressed very well with a real intensity,” he added.

“[We must] play out better, the last one there’s an element of fatigue and when you are fatigued errors happen.

“We were not quite as sharp on some of the decision-making but I think it’s a really important game for us to reflect on, and the next few days will be painful having got to this stage.”

England appeared to have taken the lead with five minutes remaining as Jesse Lingard beat Jasper Cillessen with a calm finish, but the goal was ruled out after the Manchester United forward was ruled offside following a VAR review, a decision Southgate described as “deflating”.

‘We were inches away’

England captain Harry Kane was introduced off the bench in the second half, after his involvement in last week’s Champions League final, and the Tottenham striker says his side will take the defeat “on the chin”.

“We scored what we thought was going to be the winner but that’s the fine margins in games like this,” Kane told Sky Sports. “It’s part of learning as a team, we take that on the chin and that’s the way we want to play.

“That’s what VAR is there for. It’s hard because you think you’ve won but we’ve got to get used to it. I’m sure they got it right.

“I don’t think the Champions League final affected it tonight, as a squad we are good enough whoever plays and we were a few inches away from winning it.”

Raheem Sterling, who won his 50th cap as captain in Kane’s absence from the start, said the Three Lions were “punished” for their “silly mistakes”.

“We made a few mistakes and I thought we tried to play at times but it didn’t work,” he told Sky Sports. “We have still made progress to get to this stage but it is about kicking on and making that last step now.”

In a game of mistakes, highly-rated Ajax teenager Matthijs de Ligt conceded a first-half penalty after bringing down Marcus Rashford once the Manchester United had dispossessed him.

However, the Ajax centre-back recovered to bring his side level with a powerful header after losing his marker Stones at a corner.

“We all make mistakes but he [De Ligt] responded superbly – straight away he beat a player,” said Netherlands coach Ronald Koeman.

“I said nothing to him at half-time and was delighted that he scored.”