Netherlands and Scotland advance at World Cup of Darts 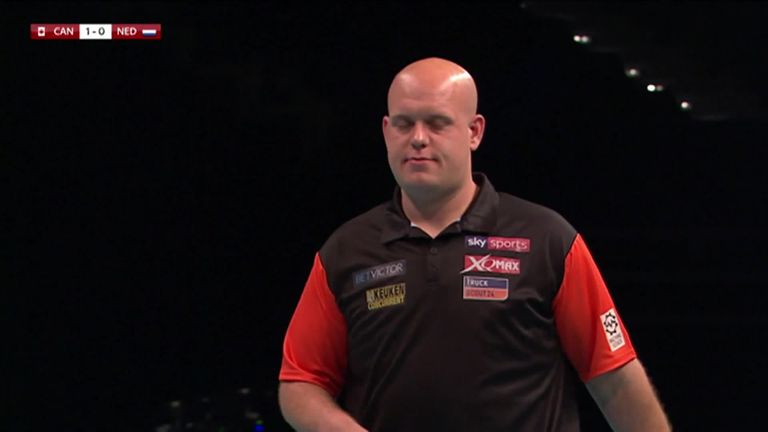 Michael van Gerwen suffered a first World Cup of Darts singles defeat since 2016 but recovered to beat Canada and reach the semi-finals.

Dawson Murschell stunned MVG with a 4-2 win in the singles but debutant Jermaine Wattimena won his own singles contest before the pair teamed up to win the deciding doubles contest.

It’s the Republic of Ireland up next after they added another seed to their scalp of England, beating Austria 2-1 to reach the semi-final for the first time and ensure their opponents went out at the last eight for the fourth time in five years.

Last year’s runner-up Scotland got the better of Belgium in a thrilling contest that saw all four men average more than 100 in the singles matches, but the pairing of Gary Anderson and Peter Wright underlined their undoubted class with 4-2 wins to reach the semi-finals again.

They will face Japan in the last four, who beat New Zealand thanks to singles wins for Seigo Asada and Haruki Muramatsu. 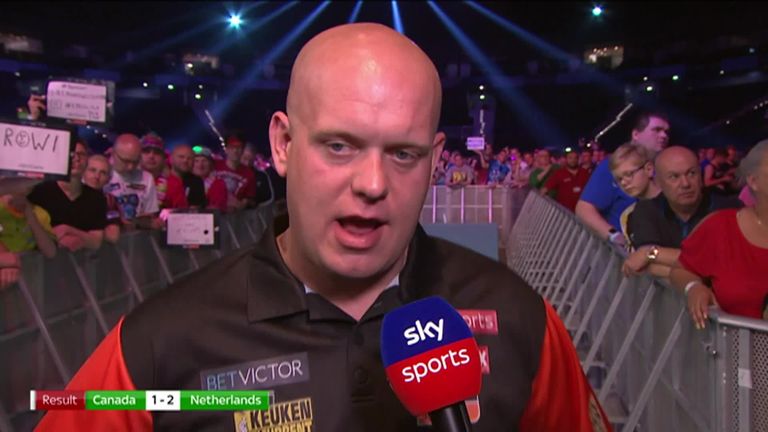 The Dutch prevailed 2-1 but that only tells half the story after Murschell reeled off four successive legs to beat Van Gerwen, who lost his first singles match since defeat to Adrian Lewis in the 2016 final.

Van Gerwen had missed 10 darts at double in the opening leg but was still able to claim the lead with Murschell failing to even get to a finish.

The world No 1 eased into a 2-0 lead and it looked like being a straightforward rubber, but with MVG’s average plummeting to 85, Murschell took out the next two legs to level up.

Murschell, the world no 100, pinned double top again for a break of throw and the lead, which he turned into the most unexpected of points via double five after the pair had traded more missed darts.

Wattimena has impressed in his first outing at the tournament and he needed to do so again against a dogged Jim Long who refused to buckle, taking out a brilliant double-double finish of 86 to stay in touch and then miss darts to force a deciding leg.

With a 4-2 in the bag, Wattimena was joined by a more focused Van Gerwen as the pair had little trouble in winning the doubles for the loss of just a single leg. Anderson claimed the opening rubber, a high-quality contest with Kim Huybrechts that saw both men averaging 100 but it was the Scot who timed his run to perfection.

The Flying Scotsman started slowly allowing Huybrechts to break straight away but a classy 72 finish got Anderson on the board and he edged in front after the Belgian missed a dart for a third consecutive break of throw. 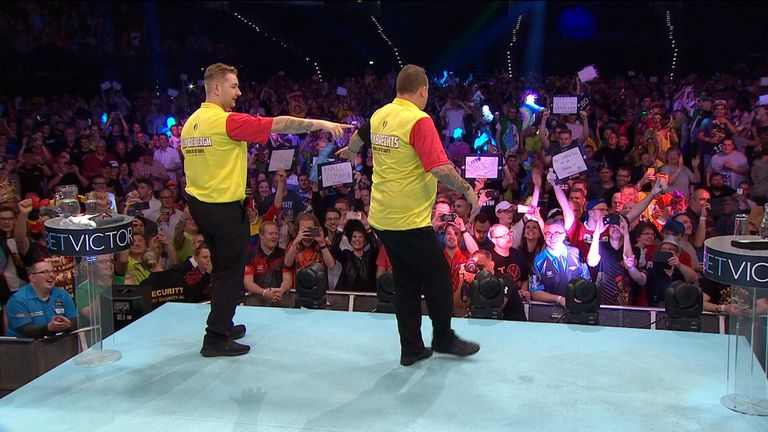 With the game rattling along at a relentless pace, Huybrechts levelled only to see Anderson put the afterburners on with a display of pressure scoring and clinical finishing, averaging more than 120 to claim the last two legs and the first point.

After the pair had split the opening four legs, Wright levelling up with a brilliant 11-dart leg, Van den Bergh missed a dart at bullseye to hold throw and that handed Wright the chance to break via double top.

A thrilling contest got a thrilling conclusion as Van den Bergh left 84 after just nine darts but his fourth visit saw him fail to leave a double and Wright wrapped up victory by pinning double 12. 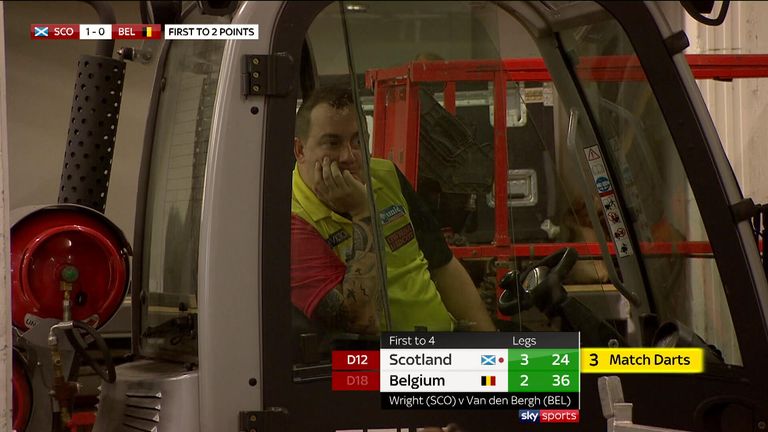 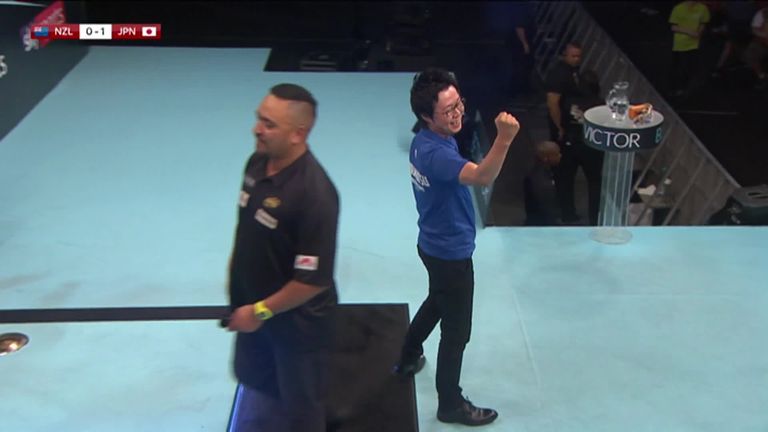 Japan underlined the progress being made by the sport in the Far East by reaching the semi-final for the first time in their history, proving too strong for New Zealand.

Asada swept Japan into a dominant early position against Cody Harris, a barrage of 140s and some impressive finishing saw him 3-0 in front in the blink of an eye.

Seigo Asada has taken a commanding lead against Cody Harris.

His partner Haruki Muramatsu is loving it!

However just as in the second round against Singapore, Asada’s doubling let him down and gave Harris a window of opportunity but the Kiwi could only manage a solitary leg as Japan claimed the point via double four.

After Asada’s comprehensive victory, Muramatsu was forced to battle through a final-leg decider against Haupai Puha. Having twice hit tops Muramatsu found the same target in the last-leg shootout to seal the showdown with Scotland on Sunday evening. 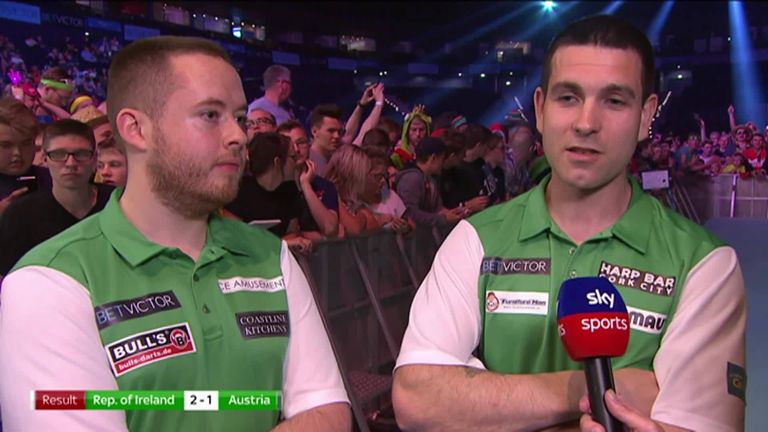 Having knocked out the top seeds England to reach their first quarter-final, William O’Connor and Steve Lennon teamed up beat Austria in a deciding leg of doubles.

O’Connor put his doubling concerns of the singles match behind him to pin all four doubles in a 4-0 win over the seventh seeds, who managed just an average of 78 and never recovered from missed doubles on their own throw in the second leg. 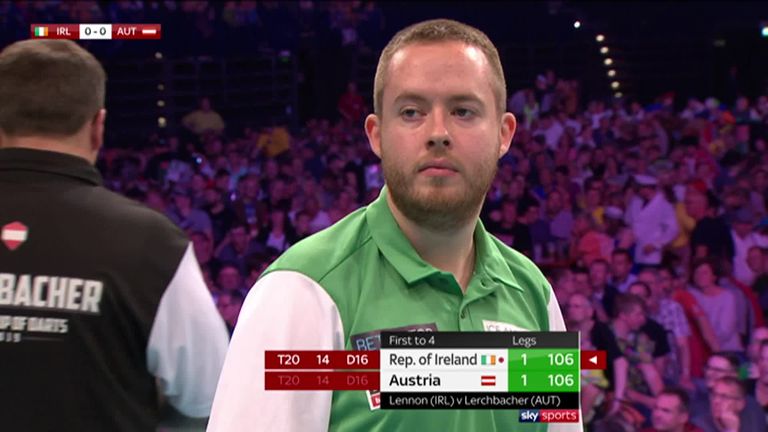 Mensur Suljovic had previously stamped his class all over O’Connor to force the decider, a 4-0 win from the world No 8 took the tie the distance as O’Connor failed to match the heights of his 115 average against Rob Cross

In the opening rubber, Lennon pinned a brilliant 106 for a 2-1 lead, Zoran Lerchbacher then missed a host of darts at double to give the Irishman a chance that he took for the solitary break of throw.