Home » Sport » New Mexico University is paying $70,000 a week to keep its entire football program in a Las Vegas hotel after COVID-19 prevented them from playing at home

New Mexico University is paying $70,000 a week to keep its entire football program in a Las Vegas hotel after COVID-19 prevented them from playing at home 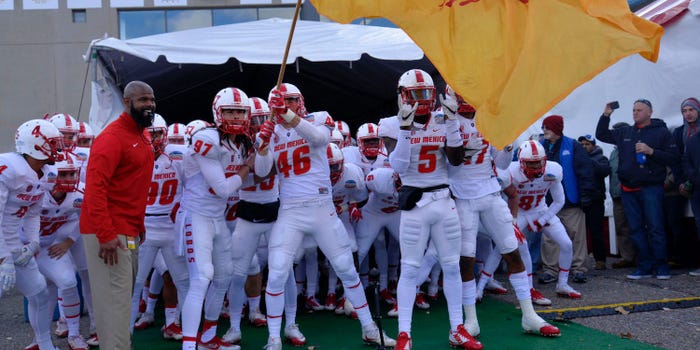 With New Mexico's government banning gatherings of more than five people due to the coronavirus pandemic and unwilling to make exceptions for sports, the Lobos packed up and moved to Nevada to play its season.

According to The Athletic's Nicole Auerbach, New Mexico University's athletic director Eddie Nunez searched for options in Arizona, California, Colorado, Nevada, and Texas, needing a stadium to play and practice, a hotel, and access to frequent COVID-19 testing.

According to Auerbach, Nunez eventually formed a plan with UNLV athletic director Desiree Reed-Francois for the Lobos to play in Sam Boyd Stadium, UNLV's previous stadium, and stay in a nearby hotel, just outside of Las Vegas.

It costs about $70,000 to house approximately 140 people between the players, coaching staff, and additional staff members at the Hilton Lake Las Vegas Resort and Spa, according to Auerbach. There are makeshift weight rooms and study rooms. There are even designated isolation rooms in case of coronavirus cases. The team gets tested three times per week.

According to Auerbach, the team's equipment staff packed a moving truck with cleats, shoulder pads, weights, exercise balls, and more, and have more equipment being sent to the team.

"The thing that you need to understand is that we didn't just move the team," Nunez told Auerbach. "We moved all the equipment. We moved all our trainers. We moved everything that we might possibly need for a week or two or more — it already seems like it's going to be more.

If New Mexico plays its season, it gets a payout of about $4 million from Mountain West Conference and the College Football Playoff, according to Auerbach.

Because of the time difference, players now wake up an hour earlier to practice before attending virtual classes, according to Auerbach.

The Lobos are planning to stay in Las Vegas indefinitely unless state regulations change. If they play their entire season in Las Vegas, they would be the first team in college football history not to play a single game in their home state, a spokesperson told Auerbach.

END_OF_DOCUMENT_TOKEN_TO_BE_REPLACED

END_OF_DOCUMENT_TOKEN_TO_BE_REPLACED
Recent Posts
We and our partners use cookies on this site to improve our service, perform analytics, personalize advertising, measure advertising performance, and remember website preferences.Ok