Opinion: Any embarrassment over USWNT’s lopsided win over Thailand belongs to FIFA

FIFA, and the Thai federation, should be ashamed.

Never before has the women’s game been so competitive, with six or seven teams able to make a legitimate claim at winning this World Cup title. Ten of the the first 14 games were decided by two goals or less.

Yet the gap between the haves and the have-nots remains glaring, and there seems to be little incentive from the sport’s power brokers to change that.

When you read the fine print, however, you see that that money will be spread over four years. Between the senior level and youth programs. To support coaches, referees, leaderships and clubs. Do the math, and it’s actually a pittance for an organization that had revenues of $6.4 billion from 2015-18.

And if FIFA doesn’t care, then why should the federations, particularly those in countries that don’t exactly prize women’s sports?

“I think expanding the last World Cup to 24 teams was great. Soon enough, I hope we expand to 32 and keep it at that number,” Alex Morgan said Tuesday night, after tying Michelle Akers’ World Cup record with five goals against Thailand.

This has to be more than wishful thinking, though.

While no one expected Thailand to beat the Americans – the U.S. women are the No. 1-ranked team in the world and defending World Cup champions while Thailand is No. 34 – it should not be too much to ask for, if not a competitive then at least a respectable game.

The 13-0 drubbing was as far from that as it gets.

In addition to the lopsided score, the United States had a 75-25 edge in possession. The Americans took 39 shots compared with Thailand’s two, and had 10 corner kicks while Thailand had none.

“Playing the United States is not easy and we know that we have to improve in every aspect and improve in our mentality. We know that all the players’ experience cannot be compared with them,” Thailand coach Nuengrutai Srathongvian said.

“We have limited resources in terms of the players and the selection,” Srathongvian said. “We have a limited number of players available. And we are small in the build. We have to improve in this aspect.” 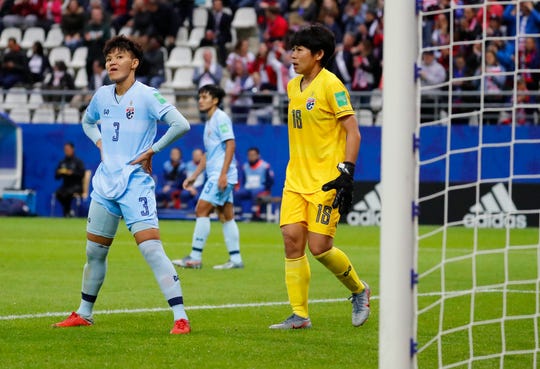 But they cannot do it on their own.

Developing programs like Thailand will go nowhere without investment in training facilities, coaching and youth programs. They also need to play exhibitions against better competition, both to raise the level of their game and see up close what they’re aspiring to become.In some countries, changing the public’s perception is as important as increased funding.

When The New York Times asked players on each World Cup team what sacrifices they’ve had to make, some of the answers were heartbreaking.

“I would throw my shorts and (cleats) out of the window so that my mom musn’t see that I was going to play,” one woman wrote.

“Running away from home to another state just to pursue my dream by playing soccer,” wrote another.

Public support from federation officials, and high-profile male players, can go a long way in changing the narrative for a women’s team.

Lastly, there needs to be a lasting commitment to grow the women’s game. It’s not enough to invest and support a team in the months leading up to the World Cup, only to ignore it the moment the tournament ends. Building a program is a process, a long one, and fledgling teams will never go anywhere if they’re always starting over.

Thailand qualified for the 2015 World Cup, and only missed making the knockout rounds because of goal differential. Yet it played only 55 games between that tournament and this one, and once went nine months without a game.

The U.S. women, meanwhile, have played 80 games since winning the title in 2015.

“That’s part of growing the pool and growing the game,” Megan Rapinoe said of what, if anything, Thailand could take out of the lopsided game. “They’ll improve from here on out.”

It’s on FIFA and the Thai federation to make sure it does.