In this hour of confusion for your venerable group, as you weigh a terrible final impression from Notre Dame and a Texas A&M team that boasts one good win and not much else, here’s a humble suggestion.

Rather than look at this choice for the final spot in your playoff as a lesser of two evils situation, you have the opportunity to do something great for the sport, and frankly, for America.

Dare to do what your predecessors were able to avoid for the last six years. Have the courage to tell the establishment programs that they didn’t do enough to earn their place. Throw a bone to the little guy for once. 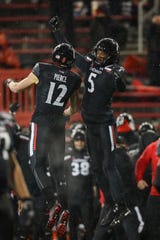 This isn’t complicated, and it isn’t even that controversial.

First, let me lay out the case against every other contender, assuming that Alabama, Clemson and Ohio State earned their way into the field by winning conference championships on Saturday.

The prevailing wisdom prior to the ACC championship game was that the Irish were in, pretty much no matter what. Notre Dame already had the best win of any team in the country this year against Clemson back on Nov. 7, and the Irish added an impressive 14-point win over North Carolina, the committee’s No. 15-ranked team. The rest of the schedule wasn’t great, but as long as Notre Dame didn’t suffer some kind of calamity in the ACC championship game, it seemed like enough even with a loss to Clemson in the rematch.

Well, calamity is in the eye of the beholder, but let’s just say a 34-10 loss to Clemson in the rematch was not a great look. Notre Dame started the game with three strong drives but made a couple key mistakes and missed a field goal, netting only three points. From there, Clemson manhandled the Irish, completely turning the tables from the earlier meeting where the Irish was superior up front.

How much should Saturday’s impotent performance erase the earlier win in the eyes of the committee? Does the fact that Trevor Lawrence and three Clemson defensive starters missed the first meeting invite more scrutiny about the validity of that win? It’s a fair question for the committee to ask.

This is a team that started the season slowly, struggling to a 17-12 win over Vanderbilt in Week 1 and suffering a 28-point blowout loss to Alabama in Week 2. Things turned around the following Saturday when A&M got its first signature win under Jimbo Fisher, beating Florida 41-38. And from a Playoff perspective, that pretty much serves as the last piece of useful information we’ve gotten on Texas A&M.

The Aggies have strung together a solid, if not always visually impressive seven-game winning streak against Mississippi State, Arkansas, South Carolina, LSU, Auburn and Tennessee, a group whose combined record is 22-38. Their best win in that stretch came against a team that fired its coach.

So that’s one quality win (vs. two for Notre Dame), one blowout loss against the best team in the country and not much else, though it has been enough for the committee to rank the Aggies  No. 5 for several weeks.

But fundamentally, including Texas A&M would be rewarding a team that didn’t win its division and thus did not have to play a quality team in a championship game. That has happened twice before — in 2016 with Ohio State and in 2017 with Alabama, and neither caused much controversy.

This would be a different case. The Aggies’ résumé simply does not compare. And does anyone outside of Texas really want to see them rematch with Alabama?  Letting A&M through the backdoor of the Playoff would essentially be the committee’s wet, sloppy kiss on the lips of the SEC.

It’s also worth remembering this: In the Playoff’s protocol, it states that for the selection committee to choose a team that didn’t win its own conference, it must be “unequivocally one of the best four teams in the country.”

Can you truly say that about either Texas A&M or Notre Dame? At least the Irish won the regular-season title.

If conference championships matter, is Oklahoma worth a second look? You can’t feel too badly for the Sooners, who were brutal early in the season and blew fourth-quarter leads against Kansas State and Iowa State. That stretch was likely disqualifying for Oklahoma, but the Sooners are a different team now on defense and avenged one of those losses with a 27-21 win over the Cyclones on Saturday.

Oklahoma now owns wins over teams ranked No. 6, No. 20 and No. 21 by the committee last week. That’s *probably* not enough to undo the damage, but the Sooners would eye test favorably against Texas A&M and Notre Dame.

Given the obvious problems with that group of teams, why not give Cincinnati serious consideration here? The Bearcats deserve it on their own merits, completing a 9-0 season and American Athletic Conference championship with a 27-24 win over Tulsa in the rain on Saturday.

If there were ever a team and a scenario that should allow for a Group of Five member to make the Playoff, this is it. Because of the pandemic, Cincinnati didn’t have the chance to go outside its conference and grab an eye-catching non-conference win.

What the Bearcats did do, though, is destroy a bunch of good teams including nine-win Army by 14, seven-win Memphis by 39 and seven-win SMU by 29, capped off by pulling out a tough win over a Tulsa team in awful weather conditions that was ranked 23rd last week. Cincinnati also hadn’t played since Nov. 21 due to a major COVID-19 outbreak on its team, making the win even more impressive.

Cincinnati stacks up well on stats, too, boasting a top-20 offense with a defense that came into championship Saturday allowing 4.25 yards per play, the best mark in the nation. Unlike other Group of Five contenders in the past that might have had an obvious weakness on defense, this is a complete football team.

So in a year where it’s nearly impossible to separate one flawed Playoff contender from another, why is it so unthinkable to give a shot to a team that didn’t lose? Cincinnati would be far from the worst team that has made the Playoff in its six-year history. What reason, other than brand bias against teams outside the power conferences, would the Bearcats not deserve this opportunity?

Through six years of the Playoff, there’s been little controversy over the fourth selection. In 2014, there was some complaining from the Big 12 that the committee elevated Ohio State over TCU and Baylor on the final weekend, but the Buckeyes winning the national title pretty much ended the debate.

This decision about whom to send to the Sugar Bowl to face Alabama is by far the stickiest in CFP history, and it will be scrutinized and second-guessed no matter which team is chosen. Who’s best equipped to give Alabama a good game? Who knows. We’ve already seen Texas A&M try and fail. Confidence in Notre Dame has been shaken. Oklahoma might have a chance, but the two losses are tough to excuse.

In an imperfect year for college football on so many levels, perfect Cincinnati is a more than reasonable choice. And it’s the only one that could save the selection committee a major headache.

END_OF_DOCUMENT_TOKEN_TO_BE_REPLACED

END_OF_DOCUMENT_TOKEN_TO_BE_REPLACED
Recent Posts
We and our partners use cookies on this site to improve our service, perform analytics, personalize advertising, measure advertising performance, and remember website preferences.Ok