Home » Sport » Out of this world: Best of the best from the cup

Out of this world: Best of the best from the cup

You know me – soccer nutter! Well, not quite, but I have followed the ins and outs, the sins and pouts, the bins and shouts, more than somewhat and have a couple of mates who haven’t missed a minute. Here, then, on the eve of the final itself, is our own awards ceremony.

Most surprising performance. The Socceroos. We all knew, particularly after the ordinary performance against France, that this was going to be the same old, same old story: hopes crushed by an ignominious exit. But it wasn’t like that. Instead, our blokes beat Tunisia and Denmark in sterling fashion and gave Argentina a real shake, going within the length of an arm of getting a 2-2 draw at the end of regulation time.

Biggest find. That, obviously, is the 18-year-old Garang Kuol, who came to Australia as a South Sudanese refugee and played this World Cup off the Socceroos bench. He was outstanding and came within ace of scoring the goal that would have levelled the scores 2-2 with Argentina with a minute to go. What might have been!

Biggest shock. Saudi Arabia defeating Argentina was just about the most unheard of thing we’d ever heard of, but Japan beating Germany just outdid it because it meant the four-time champions had to leave the tournament in the group stage for the second consecutive World Cup.

Most compelling story. Morocco. The first African side to make the semi-finals, where they went down fighting to France. but just to get there they had already beaten European powerhouses Spain, Portugal, and Belgium, not to mention Canada.

Best fans. Of course, the Japanese. Back in the day, certain soccer fans were notorious for losing, trashing the joint, and starting riots. Not the Japanese. Win, lose or draw, they stayed behind after the match and helped clean up. 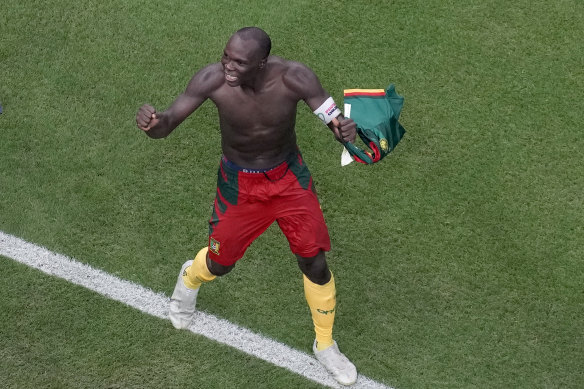 Vincent Aboubakar’s celebration got him thrown out of the match.Credit:AP

Best satellite. Look! Up in the night sky! It’s a bird! It’s a plane! No, it’s Harry Kane’s penalty shot, which is still orbiting with the satellites.

Biggest underachievers. Brazil. All that talent, all those let-downs. With Pele, they won three World Cups in 12 years. Since his retirement, they’ve won just two in the following 52 years.

Biggest killjoy. The American ref in the Cameroon-Brazil match. After Cameroon’s Vincent Aboubakar scored in the 92nd minute to beat Brazil – to beat BRAZIL! – he took his shirt off, as you do, and was promptly sent from the field. Why? Because he had already received a yellow card, and as taking your shirt off is a bookable offence, the second yellow meant he had to go. Aboubakar smiled, shook the ref’s hand, and left the field – the victor.

Biggest fall. Cristiano Ronaldo. Arrived at the World Cup as world superstar. Finished it by not even starting for Portugal.

So yes, I have enjoyed watching bits and pieces of the World Cup and have even gained an inkling of understanding as to why it can be so compelling for so many.

The one thing that still completely escapes me, however, is the celebrations after each goal is scored.

Some bloke kicks the ball from 45 metres away with such curving accuracy it could knock the cigarette out of a sparrow’s mouth, and drops it right on the noggin of the bloke who does the header for the goal.

But the scorer, instead of running to the genius who crossed it to him, runs anywhere but. They never seem to pay their dues to those who have set it up, but always carry on as if the most important thing is to make sure that everyone knows that when it comes to true genius, it would take three Albert Einsteins sitting on each other’s shoulder just to look them in the eye.

It seems to me . . . a little on the self-indulgent side of things? Fire at will. See if I care.

Hand it to Hansel

His name’s Hansel Emmanuel, and when he was just six years old, a wall collapsed on him, trapping him for two hours and damaging his left arm so badly it had to be amputated below the shoulder. Did that stop him playing sport? It did not.

And, amazingly, he still prospered in the sport of basketball, despite the fear that without two hands he would be unable to dribble or be balanced enough to shoot under pressure. The hell with that.

Emmanuel, now 19 years old and 2 metres tall, was a basketball sensation at high school in Florida and so good he won a scholarship to play for the Northwestern State University of Louisiana. This week, he came off the bench and was fouled with a minute to go.

Now look what happens as the ball rebounds back to him from off his missed second free throw. He gathers, he bounds, he shimmies, he shakes, he leaps and SLAM-DUNKS! The crowd rises, his mother cries, and he is swamped by joyous team-mates.

“I know my family was proud,” he said afterwards. “You can’t give up.”

And that’s a wrap

And to all a good night. It has been a big sporting year, and I will be taking a six-week break. All the best to you and your families for a great holiday season, and great 2023. Thank you for your readership this year.

Harry Kane on his penalty miss that led to the team he captained, England, being eliminated from the World Cup: “Of course, it’s something I will have to live with and take on the chin. But all we can do is be proud of each other and know that the team is in a really good place for the future.”

Argentina coach Lionel Scaloni refuting that they were bad sports after beating Holland on penalties: “We need to put an end to this idea of us not being good winners or losers – that’s very far from who we actually are as a team, as a squad and as the way we represent this nation.”

Lionel Messi on how losing to Saudi Arabia really was a blessing in disguise: “To start in such a way in a World Cup was a blow; we did not think we would lose to Saudi Arabia. It was an acid test for this whole squad, but this squad proved how strong we are.”

Feisty Lionel Messi to a Dutch opponent after a spicy quarter-final: “What you looking at, idiot? Go on, f**k off over there.” 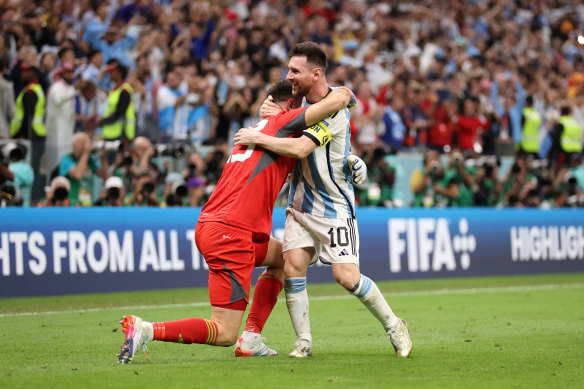 Emi Martinez and Lionel Messi of Argentina celebrate the win over the Netherlands.Credit:Getty Images

Neymar after the loss to Croatia on if it’s his last time playing for Brazil: “It feels like a nightmare. It’s hard to believe this is happening.”

Morocco coach Walid Regragui after they became the first African side to advance to the World Cup semi-finals: “We are the Rocky Balboa of this World Cup. Unlike Rocky, though, Morocco haven’t been knocked down. We are the team that everyone loves in this World Cup because we are showing the world you can succeed even if you don’t have as much talent and money.”

Steve Smith on David Warner and his captaincy ban: “From my point of view, banning someone for life from leadership is just fundamentally wrong.” Perhaps, but still not as wrong as taking sand-paper to a cricket ball, yes? 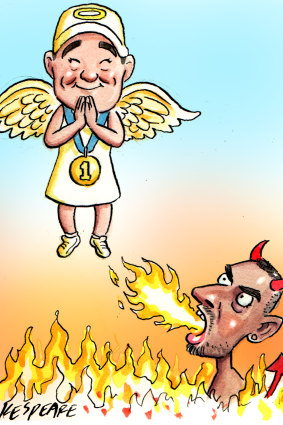 Simon Chadwick, a professor of sport and geopolitical economy at Skema Business School in Paris, quoted in the New York Times on LIV golf: “The margins might be thin, but that doesn’t really matter. Because subsequently you’re establishing the legitimacy of Saudi Arabia – not just as an event host or a sporting powerhouse, but legitimate in the eyes of decision makers and governments around the world.”

Australian Professional Leagues CEO Danny Townsend defending the decision to sell the next three men’s and women’s A-League grand finals to Sydney as opposed to being hosted by the highest-ranked grand finalist: “When you think about a cup final in England, you think about the trip to Wembley, and we want fans in Australia to look forward to the A-Leagues finals in the same way.” The analogy only make sense if there was a neutral ground that no-one played at that was designated as the home of soccer in Australia.

Nick Kyrgios who, after Ash Barty won the Newcombe Medal, put up on Instagram a comparison of his 2022 achievements with her and posted: “LOL. No respect at all. I don’t give a . . .”

Team of the week

France/Argentina. Play the World Cup final on Monday morning. As it happens, they are the only two teams who managed to beat Australia in the tournament. One of the twitterati suggests this makes the Australians the bronze medallists.

Valentino Guseli. Surely a name born to be famous? The Australian teenage snowboard star won his first FIS World Cup gold medal, which is the first time an Australian snowboarder has won a World Cup Big Air event – sort of like winning a Formula One race, but on the snow, standing on a glorified plank.

Scott Boland. The Australian fast bowler now has 21 Test wickets at an average of 10.33 runs per wicket.

Sports news, results and expert commentary. Sign up for our Sport newsletter.