As his Yankees teammates watched Giancarlo Stanton rocket ball after ball out of the batter’s box, day after day during spring training, it often felt like October again. Stanton was happy and healthy then, crushing home run after home run while carrying the Yankees to within one win of the American League Championship Series.

“My gosh, I mean the home runs he was hitting weren’t just home runs but light-tower home runs,” Yankees first baseman Luke Voit said, adding: “The only problem is that I hit behind him and when he hits those balls so far, I’m like, ‘All right, I’ve got to do the same thing.’ And I ended up striking out.”

Stanton has not always looked or felt that good since the Miami Marlins offloaded him and his huge contract onto the Yankees after his award-winning 2017 season. Because of repeated injuries, Stanton, one of the fittest and strongest players in baseball, has appeared in roughly half of his team’s games since his move to New York. And when he was in the lineup during past postseasons, he hadn’t contributed much, either.

That changed last season, as did his leadership role within the team on important social issues. And now, fresh off that big October, he is looking for an even bigger year.

“He looks great,” Yankees outfielder Brett Gardner said after watching Stanton one day this spring. “He looks like he hasn’t really skipped a beat from what I remember him being last October.”

The Yankees — a favorite to contend for the World Series title, a crown that has eluded them since 2009 — have many stars. There is pitcher Gerrit Cole, the ace who will start opening day on Thursday against the Toronto Blue Jays. There is D.J. LeMahieu, the Yankees’ best all-around player and the American League batting champion last season. And there are outfielder Aaron Judge, closer Aroldis Chapman, shortstop Gleyber Torres and others.

“Our success is tied to some of our big boys really thriving,” Yankees Manager Aaron Boone said recently. 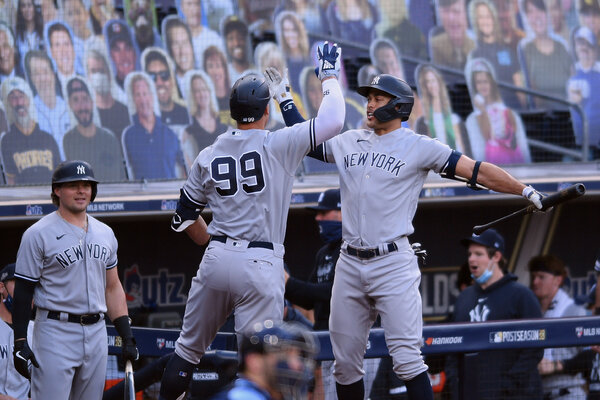 There are few bigger boys in baseball than Stanton, 31, a designated hitter listed at 6-foot-6 and 245 pounds, and the only current Yankees player with a Most Valuable Player Award on his résumé. In the past, Stanton’s size has sometimes worked against him. Since hitting 38 home runs and driving in 100 runs in 158 games of his first regular season with the Yankees, in 2018, Stanton has played in only 41 regular-season games. His list of physical ailments since is long: a biceps strain, a balky shoulder, two calf strains, a sprained knee, a strained quadriceps and a pulled hamstring.

“It hasn’t been fun,” Stanton said recently. He knows people inside baseball and out question his durability, just as he knows the only way to dump that label is to play. “You got to be out there on the field,” he said, “if you don’t want questions.”

So after an injury-marred 2019 season, Stanton said he had lost roughly 20 pounds — an attempt to return to the weight of his healthier, most productive years. But that didn’t do the trick: Stanton was limited, again, appearing in only 23 of the Yankees’ 60 games in the truncated 2020 regular season.

He significantly altered his workout regimen this winter and lifted weights less often, the Yankees’ director of player health and performance, Eric Cressey, told the Yankees’ television network. The result, Stanton said, has been improved agility and, he hopes, better odds of staying on the field.

Stanton’s father, Mike, said that the injuries had been the low points of his son’s career, which has included four All-Star selections and 312 career home runs. “He wants nothing more than to be out there contributing,” Mike Stanton said in a phone interview this week.

Even while on the injured list last year, Stanton contributed in valuable ways. As the social unrest that was consuming the nation reached into Major League Baseball clubhouses, Stanton, one of the quieter players on the Yankees, stood front and center during several team meetings on the subject, teammates and team officials said.

He shared stories about his experience as a biracial man in America, spoke about growing up in Los Angeles mere blocks from where Rodney King was beaten by the police in 1991, and made clear his thoughts about what needed to change. In a sport with relatively few Black American players, Stanton was also one of the few people who regularly knelt during the national anthem.

“It was cool that he was speaking out, because there are people in that room that have never experienced anything like others have,” said Yankees outfielder Clint Frazier, who is white.

“And when he was speaking out and he was talking about things that he had experienced, and others were talking about it, it really pulls at your heartstrings. And it made you realize the way that these guys compartmentalize some of the things that happened in their everyday life versus what’s happening at the field.”

Yankees General Manager Brian Cashman said in a phone interview that Stanton’s physical strength had always been apparent. But as protests and difficult discussions about race swept the country, Cashman added, Stanton “rose to the occasion, and that inner strength showed up from Day 1.”

“It needed to be done,” Stanton said.

Stanton, whose maternal grandparents were African-American and Puerto Rican, said what he saw in the country last year reminded him of what his grandmother and mother used to tell him that they experienced. While speaking up, Stanton said, he simply wanted the people around him to learn more about the issues.

He said he cared little if his words and actions led others to label him a team leader or not, and this winter he made clear he planned to stay a Yankee by passing up the opportunity to exercise the opt-out clause in his contract, which has seven years and a guaranteed $218 million remaining.

Given his injury history, it would be tough for Stanton to top that guaranteed money as a free agent, and he has emphasized that he wants to win a World Series with the Yankees. Stanton now hopes that, at least for the next eight months, his body will cooperate.

Boone has predicted “a huge season” for Stanton if the Yankees can help him stay on the field. A reason for his bullishness: Boone argued that Stanton was a better hitter now than he was in his M.V.P. season, in 2017, when he smashed 59 home runs and drove in 132 runs.

Stanton concurred, citing his improved approach at the plate (his walk rate was up the past two seasons). He said he had done eye training over the years. Last October, he tied a Yankees record with six home runs in a single postseason.

“When he’s healthy, he is one of the best players in the game,” Cashman said. “That has never been in dispute. And if anybody had questions to whether he could be the same type of player when healthy in the postseason, he showed that as well last year.”

The key for Stanton will be showing it during a marathon baseball season. There are hints that will be possible. During a recent batting practice in Florida, Stanton and Judge were back to clobbering balls over the fence. As he left the cage, Frazier sidled up to Stanton and asked, “Don’t you feel like you should be on a field that’s bigger than the one that you’re on right now?”

Stanton agreed. The Yankees will be happy simply to have him on the field.