EVERYONE should know it by now – never write off the Germans.

Joachim Low’s men came from behind against Portugal in the best match of Euro 2020 so far by dishing out a Bavarian battering to reignite their hopes of going all the way with a thrilling 4-2 victory. 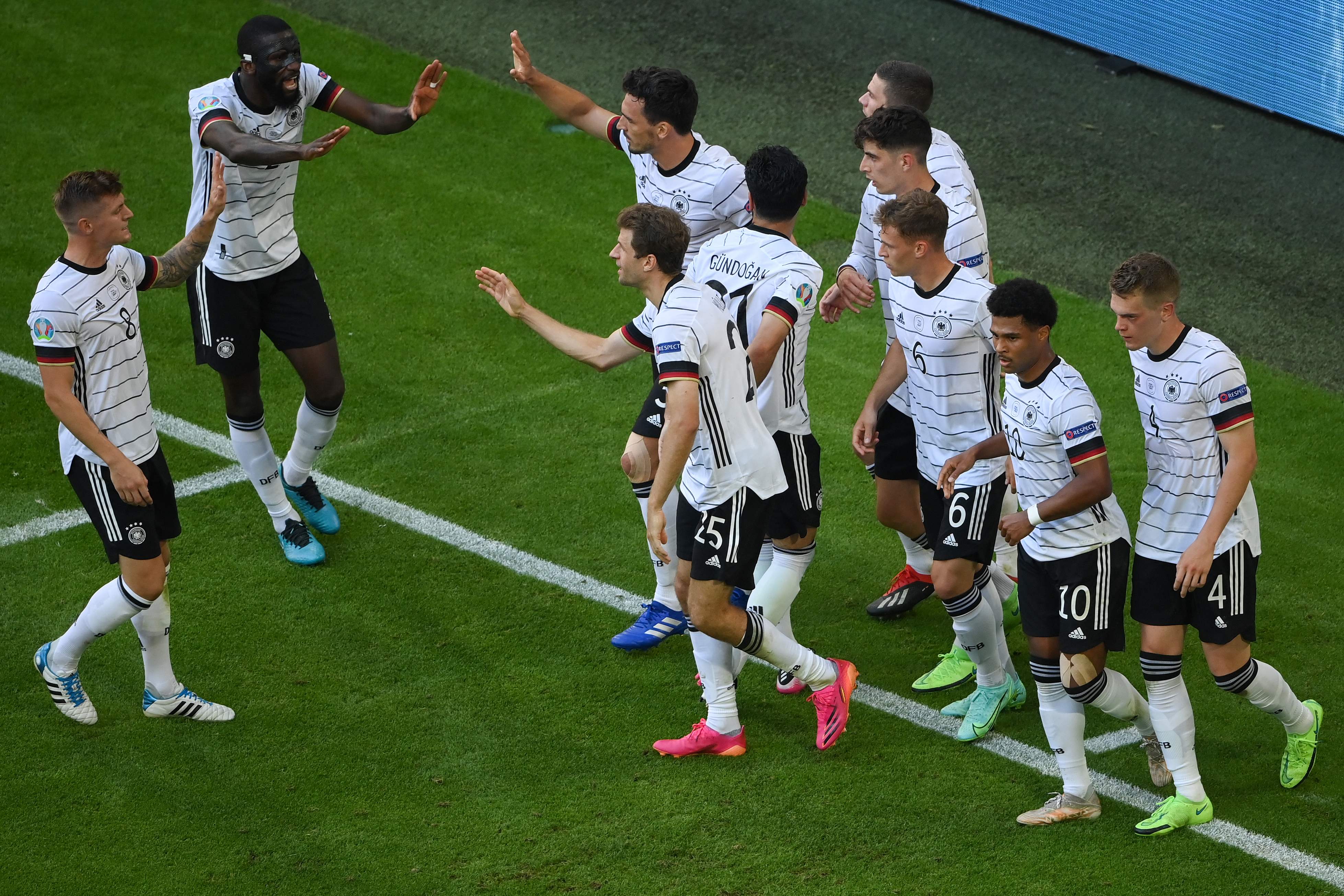 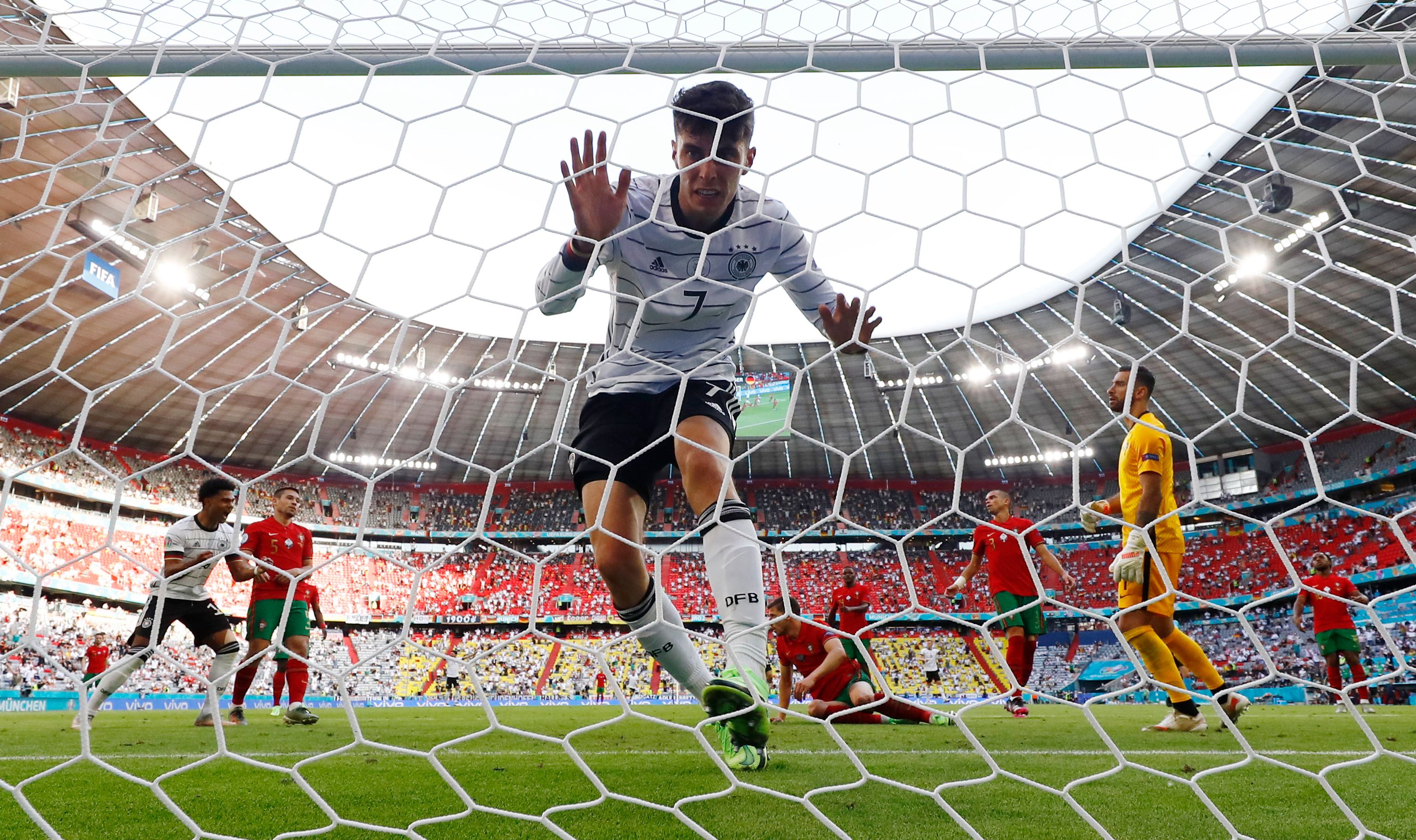 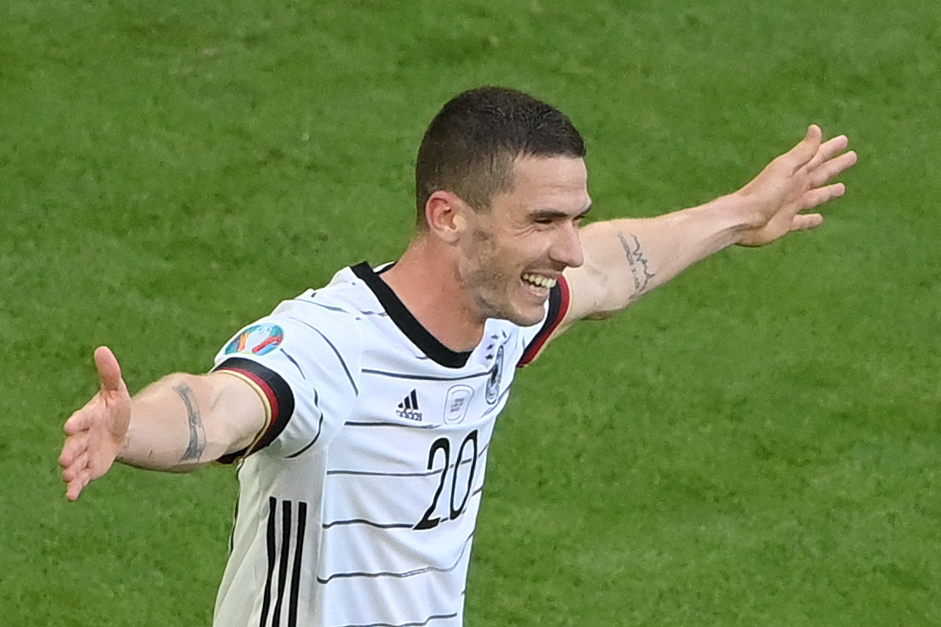 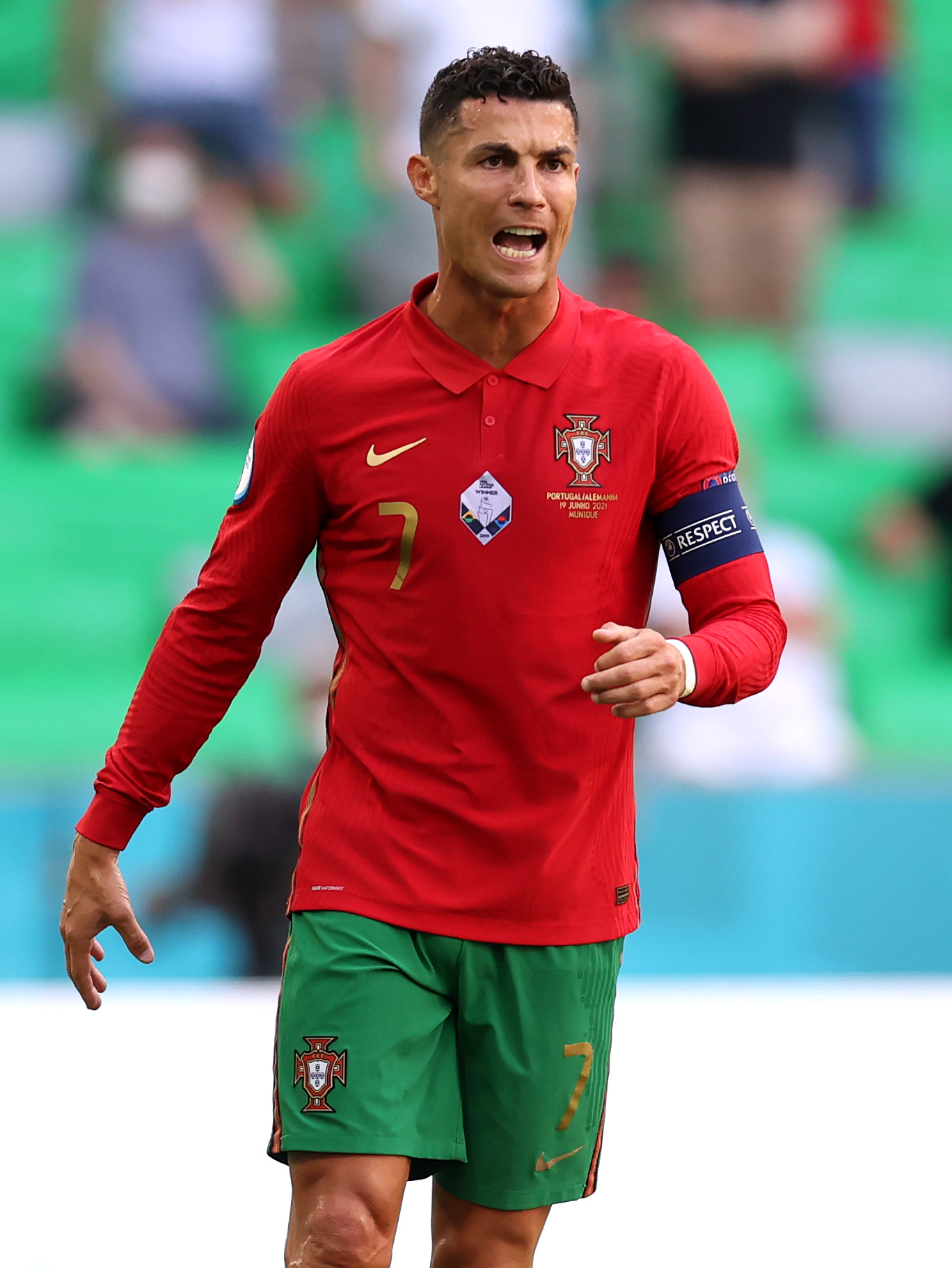 Despite Cristiano Ronaldo putting his team ahead early doors, the 2014 World Cup winners produced a staggering comeback to send a message to the rest of the continent that they mean business as their attack proved too much for the reigning champions.

Portugal used the old rope-a-dope tactic made famous by Muhammad Ali to silence the Allianz Arena in Munich.

They had been under the cosh from the start and almost fell behind Robin Gosens’ acrobatic strike after five minutes.

Fortunately for them VAR spotted a handball from Thomas Muller in the build-up and that Serge Gnabry was offside to stop what would surely have been an onslaught.

They continued to be penned inside their own half until they were cut open in devastation fashion after quarter of an hour.

Defending a corner, Ronaldo cleared the danger with a header before finishing off a counter-attack just 17 seconds later.

The ball fell to Bernardo Silva who picked out the run of Diogo Jota behind the backline to put him one-on-one with Manuel Neuer.

The in-form Liverpool star could have finished himself, but probably not wanting an ear-bashing from his legendary teammate at the break, he played the ball sideways for Ronaldo to complete his amazing 90-YARD SPRINT with a tap-in.

That was his 107th international goal and now he is just two short of equalling Ali Daei's all-time record.

But Germany refused to give up on their constant barrage of attacks and after going down to an own goal in midweek in their group opener against the French, they soon benefited from TWO before the break to deservedly turn the game on its head.

Gosens, who had been their best player, firstly volleyed the ball left-footed back across goal for Kai Havertz, only the Chelsea man failed to connect, instead it hit Manchester City’s Ruben Dias and deflected into the net. 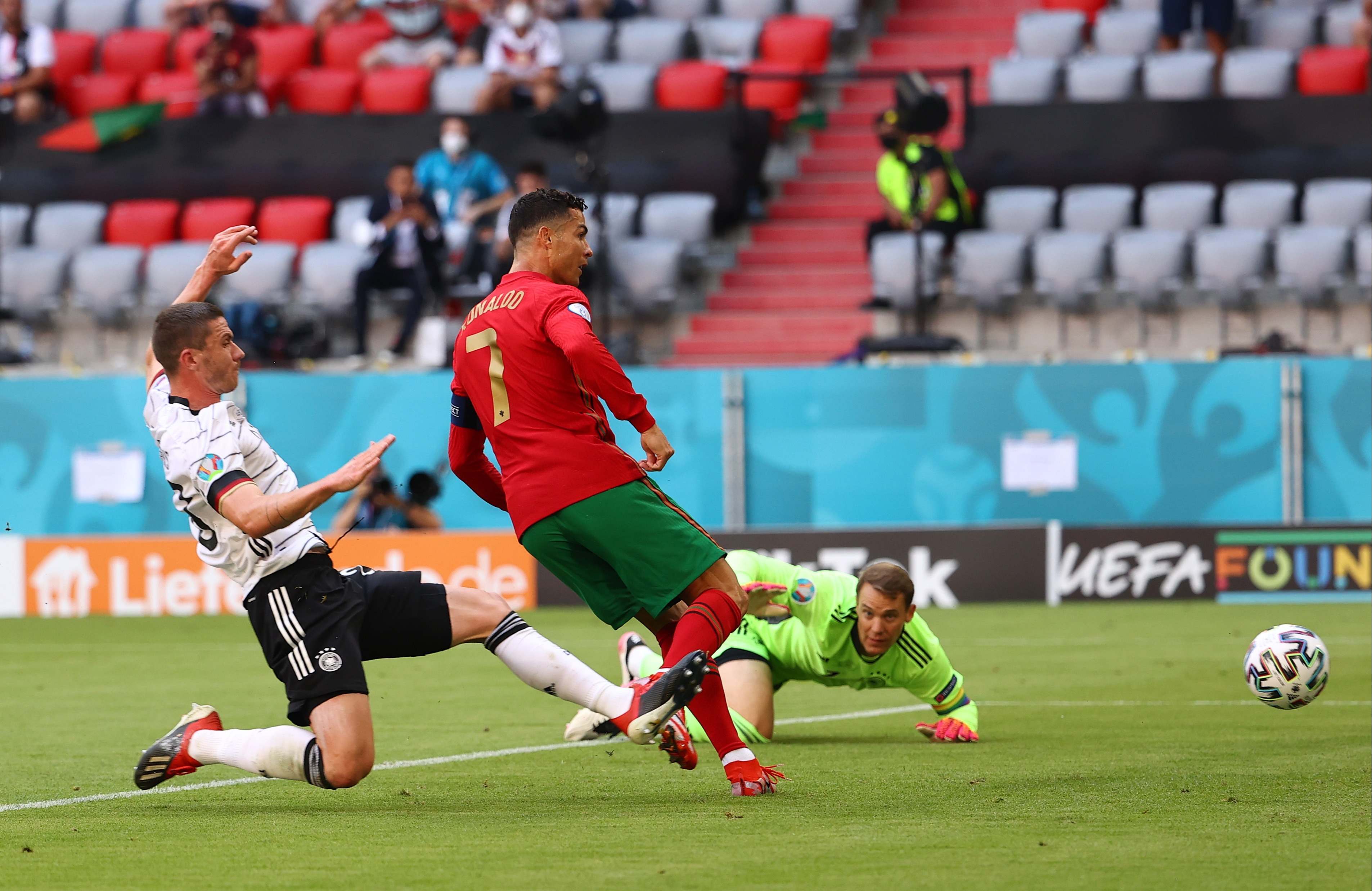 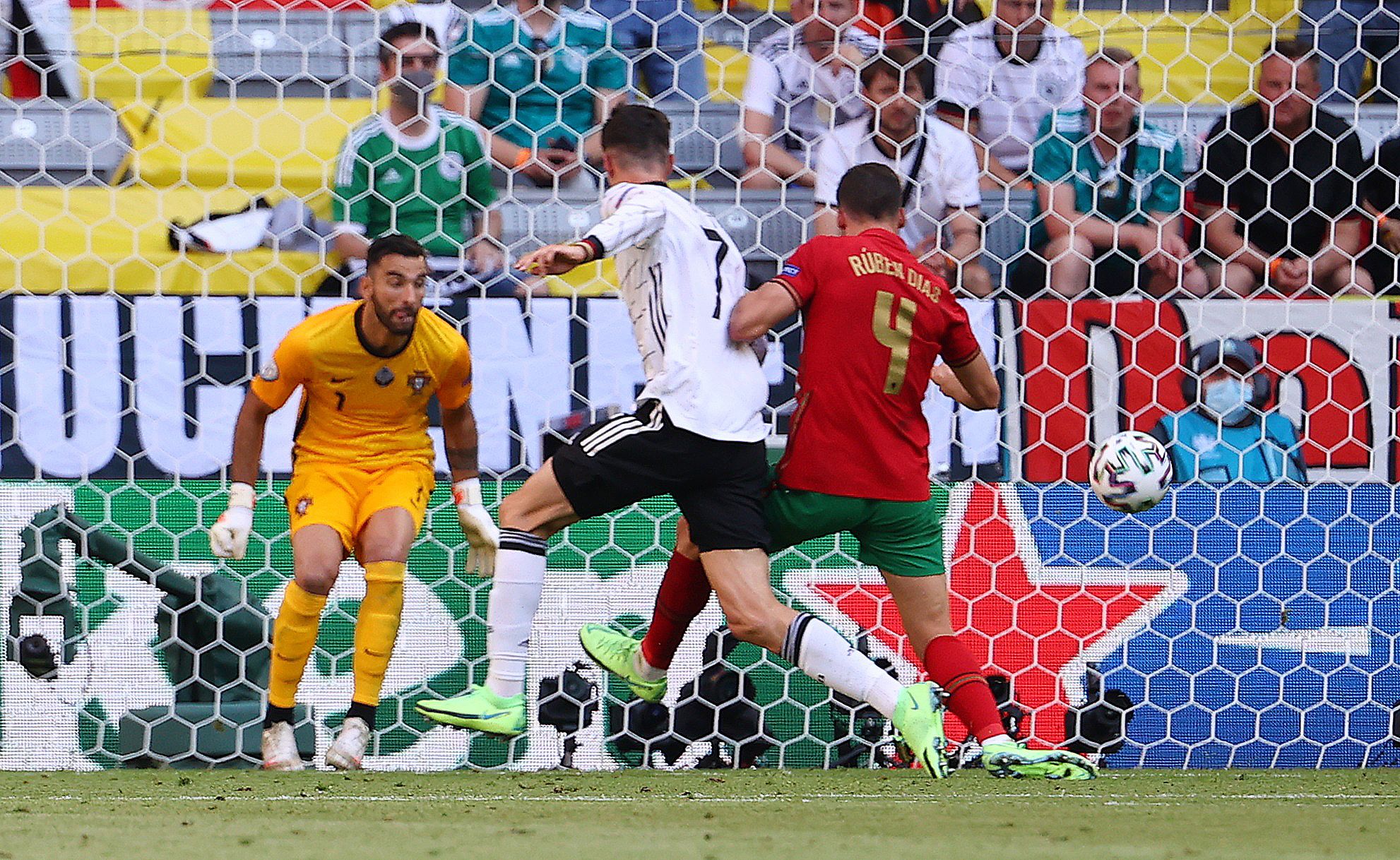 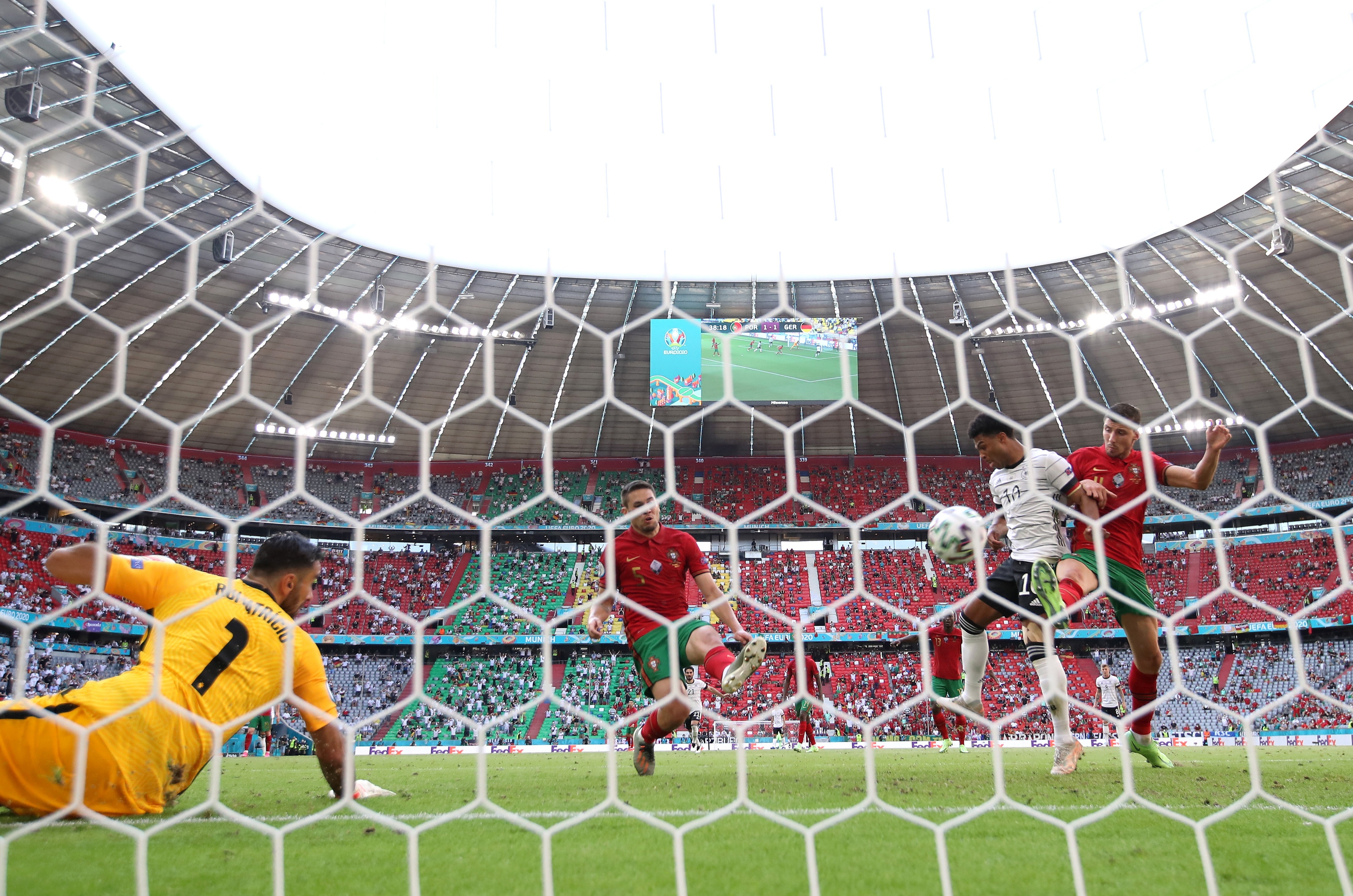 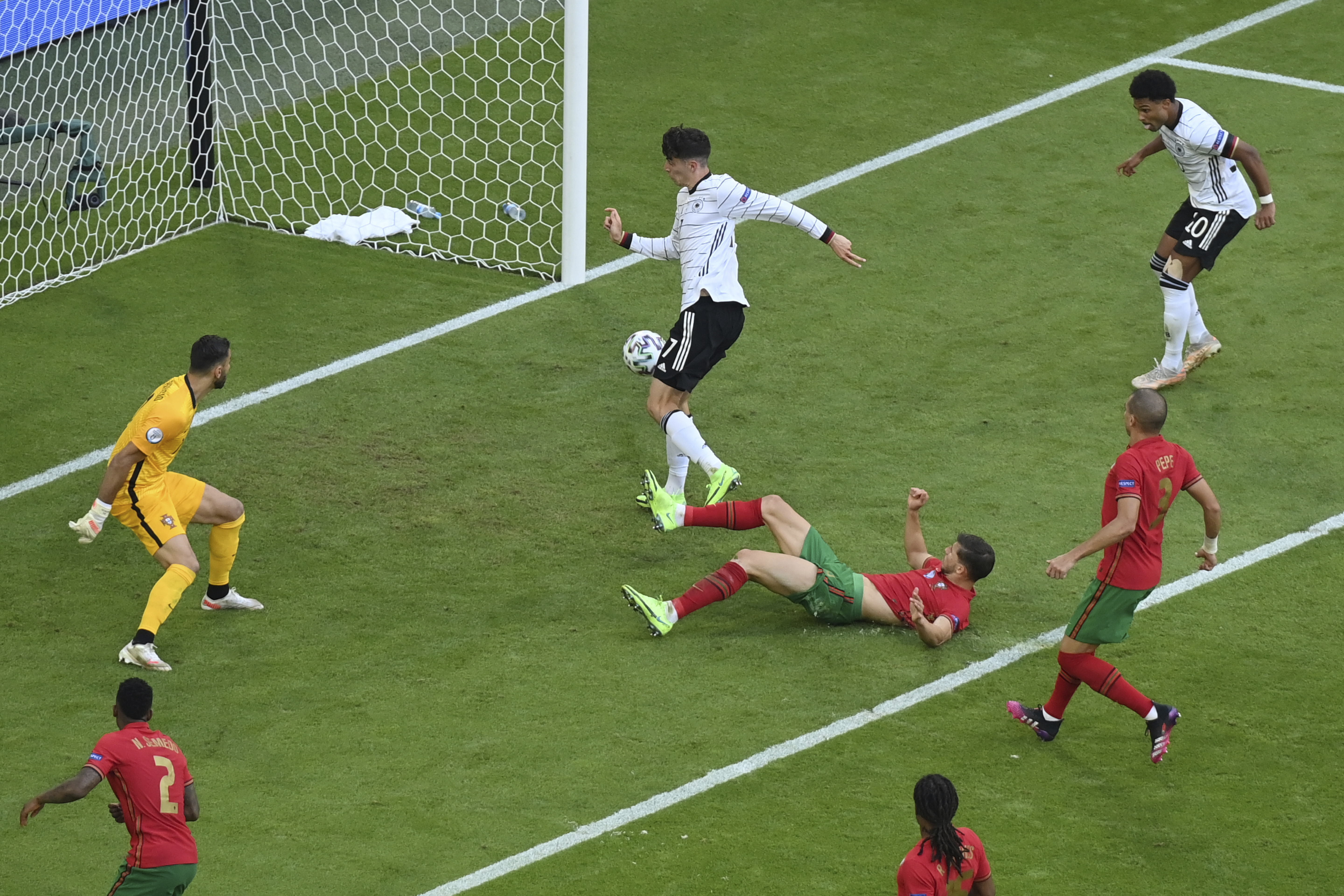 The striker was claiming it, but there was no doubt moments later when Germany took the lead four minutes later.

This time it was Joshua Kimmich who cut the ball back and unfortunate full-back Raphael Guerriero could do nothing as it struck him and flew past Rui Patricio.

With the partisan crowd now in full swing, Ronaldo and Co knew they would be up against following the restart and their task was made even harder five minutes into the second period.

It was Gosens causing all the problems again as he brilliantly stayed onside to roll a ball into the six-yard area for Havertz to side-foot home from close-range.

Just weeks ago he secured Champions League glory for Chelsea – now the 22-year-old can add being his country's youngest-ever scorer at the European Championship to his CV. 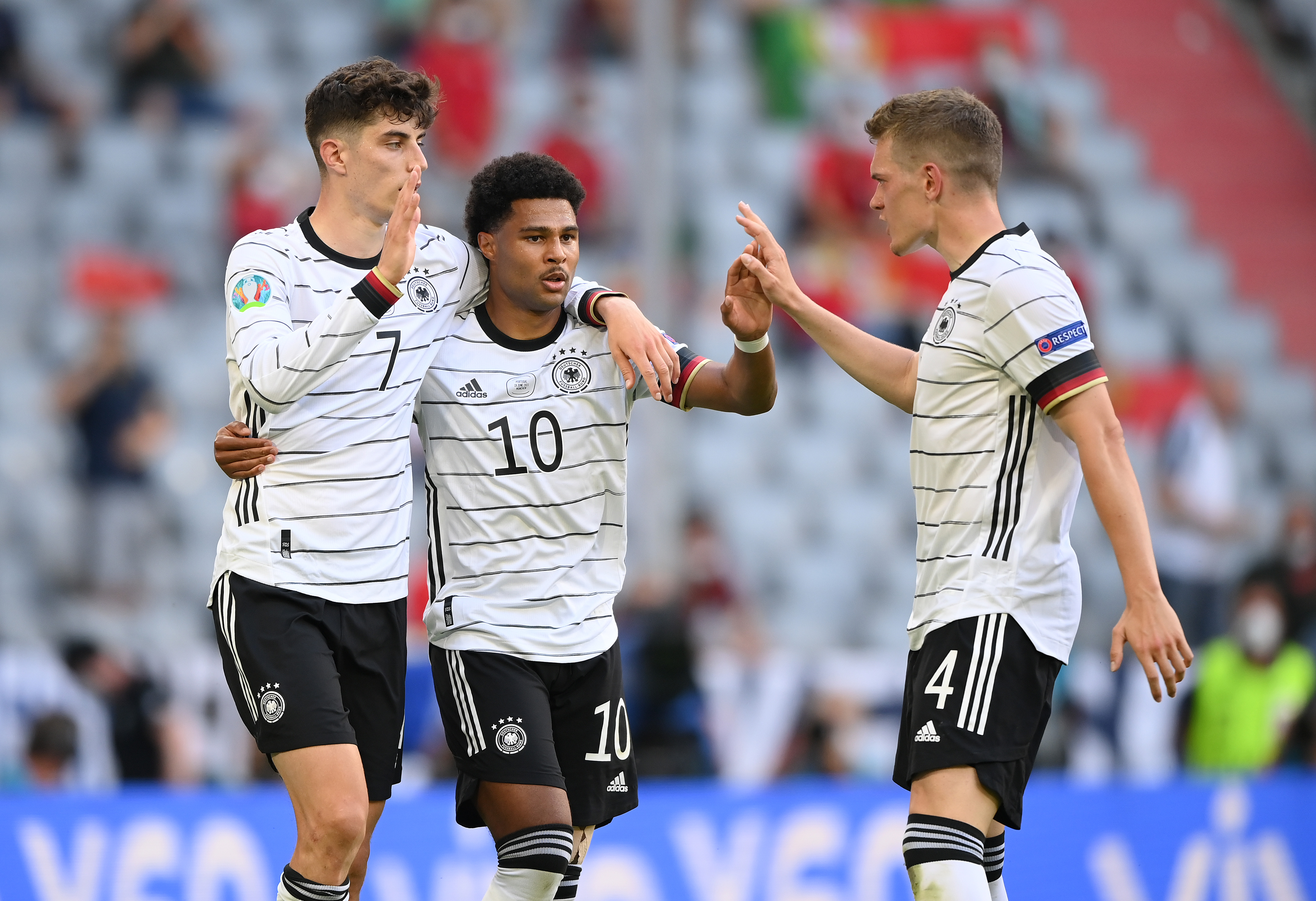 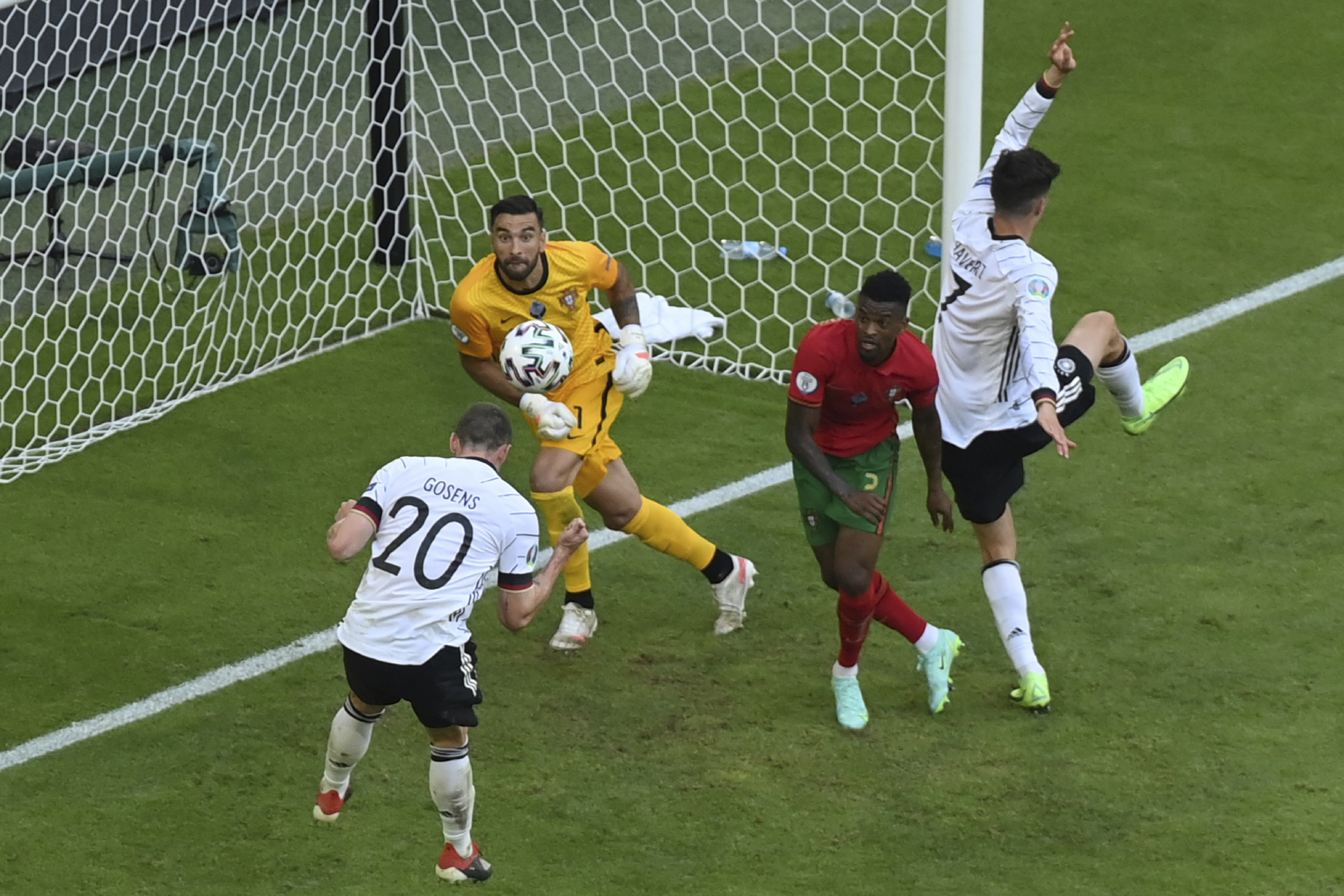 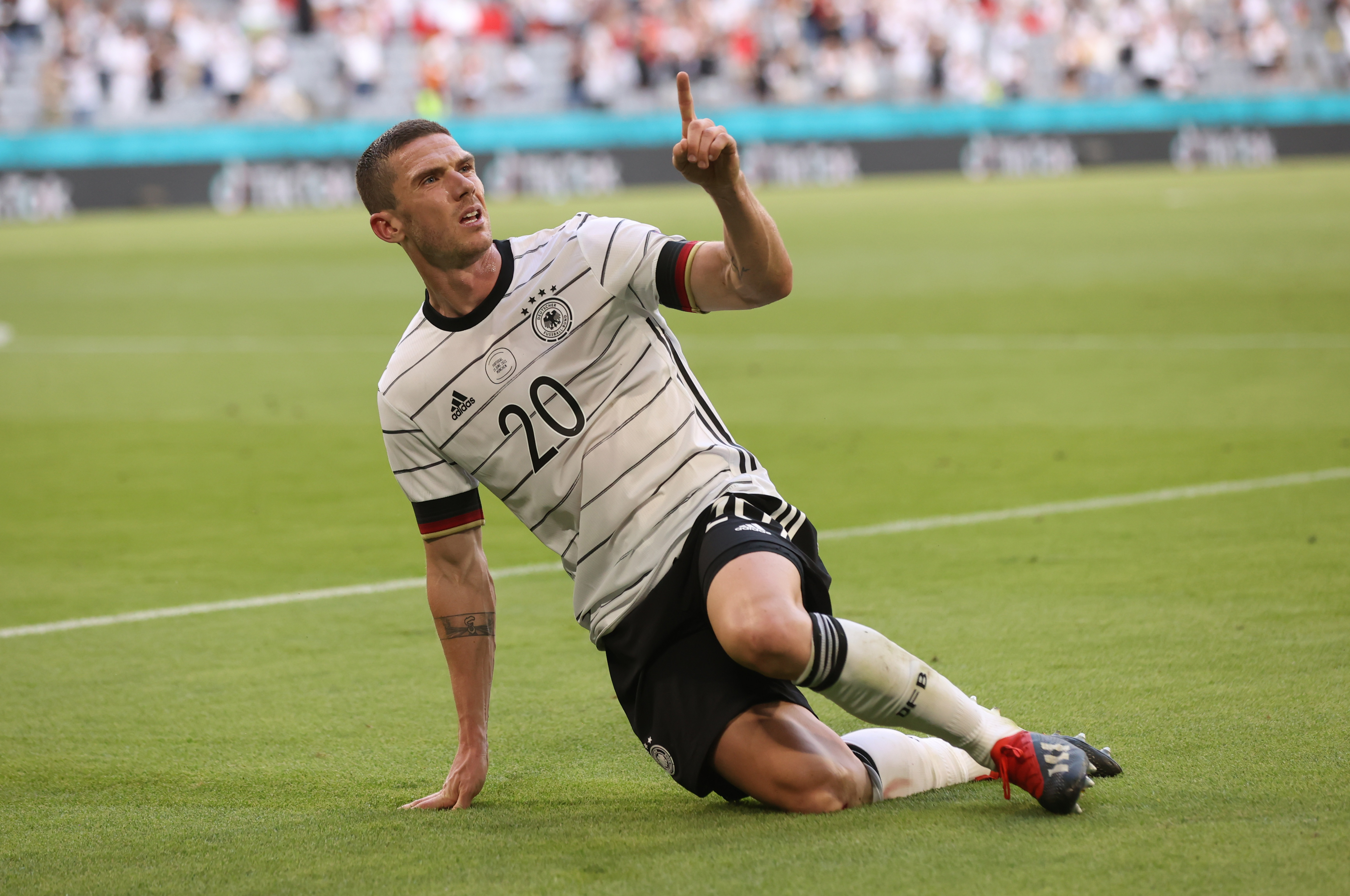 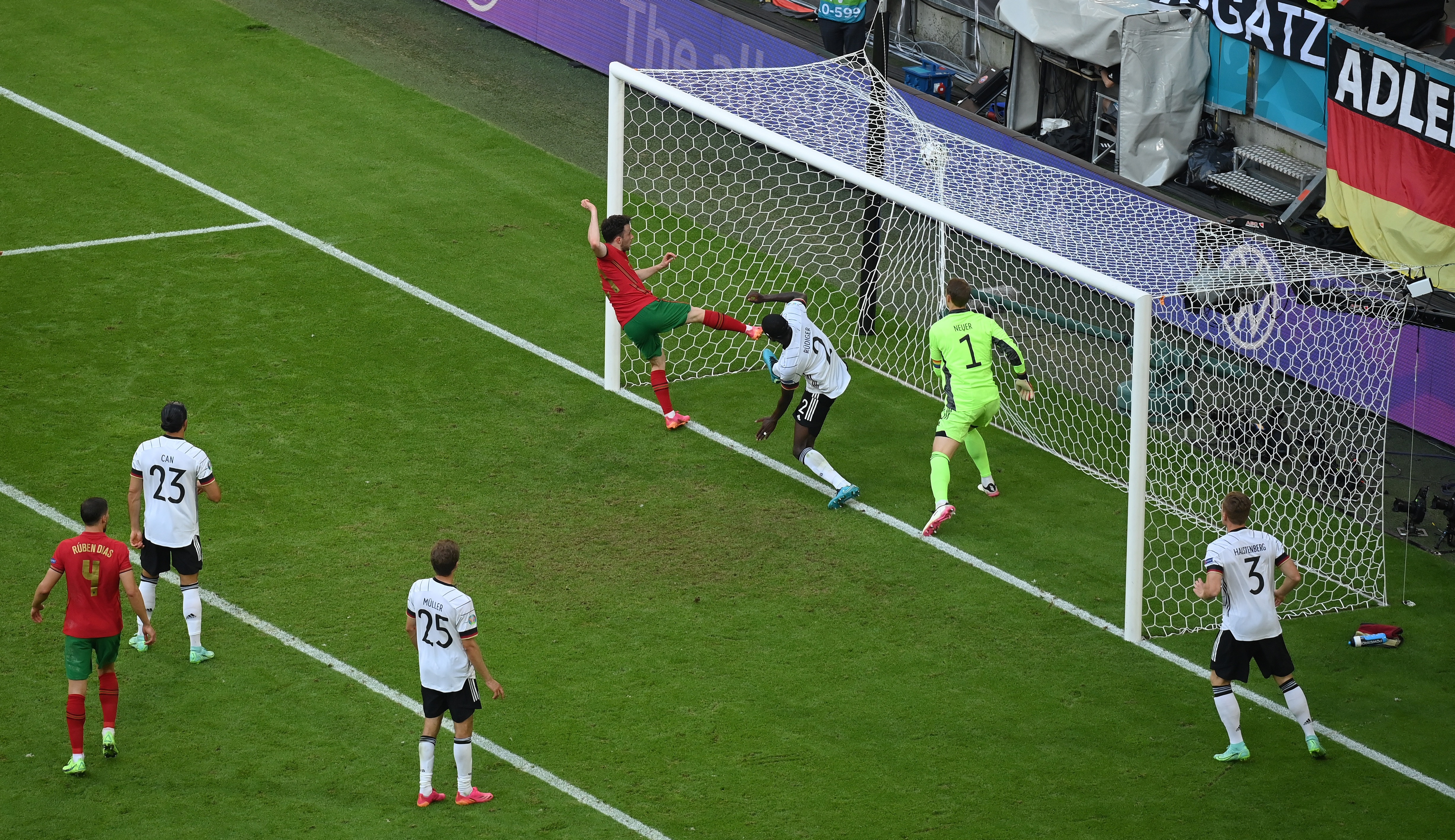 That looked to have opened the floodgates as the Germans struck again to make it four with a knockout blow.

And it was man of the match Gosens who got it after another delightful move that led to Kimmich picking the Atalanta man to head home at the back post.

Portugal appeared to be falling apart but they gave themselves hope as this rollercoaster clash produced it’s sixth goal of the afternoon.

A free-kick was lofted into the box and Ronaldo managed to keep it alive and knock it across goal for Jota to tap home.

Renato Sanchez thundered a long-ranger against the woodwork but it proved to be a false dawn for the Portuguese – who hauled off Manchester United’s Bruno Fernandes after another disappointing performance from the attacker.

That set-ups an intense final round of fixtures for Group F on Wednesday with all four teams still in with a shot of qualifying for the last-16.

Leaders France, who were earlier held by Hungary, take on Portugal as Low’s men entertain the bottom-placed Hungarians in Munich.