PREMIER LEAGUE clubs splurged more than £1BILLION this summer on transfers despite the coronavirus pandemic.

That astonishing figure – with Chelsea alone responsible for almost quarter of the total – shows there is no slowing the English top flight. 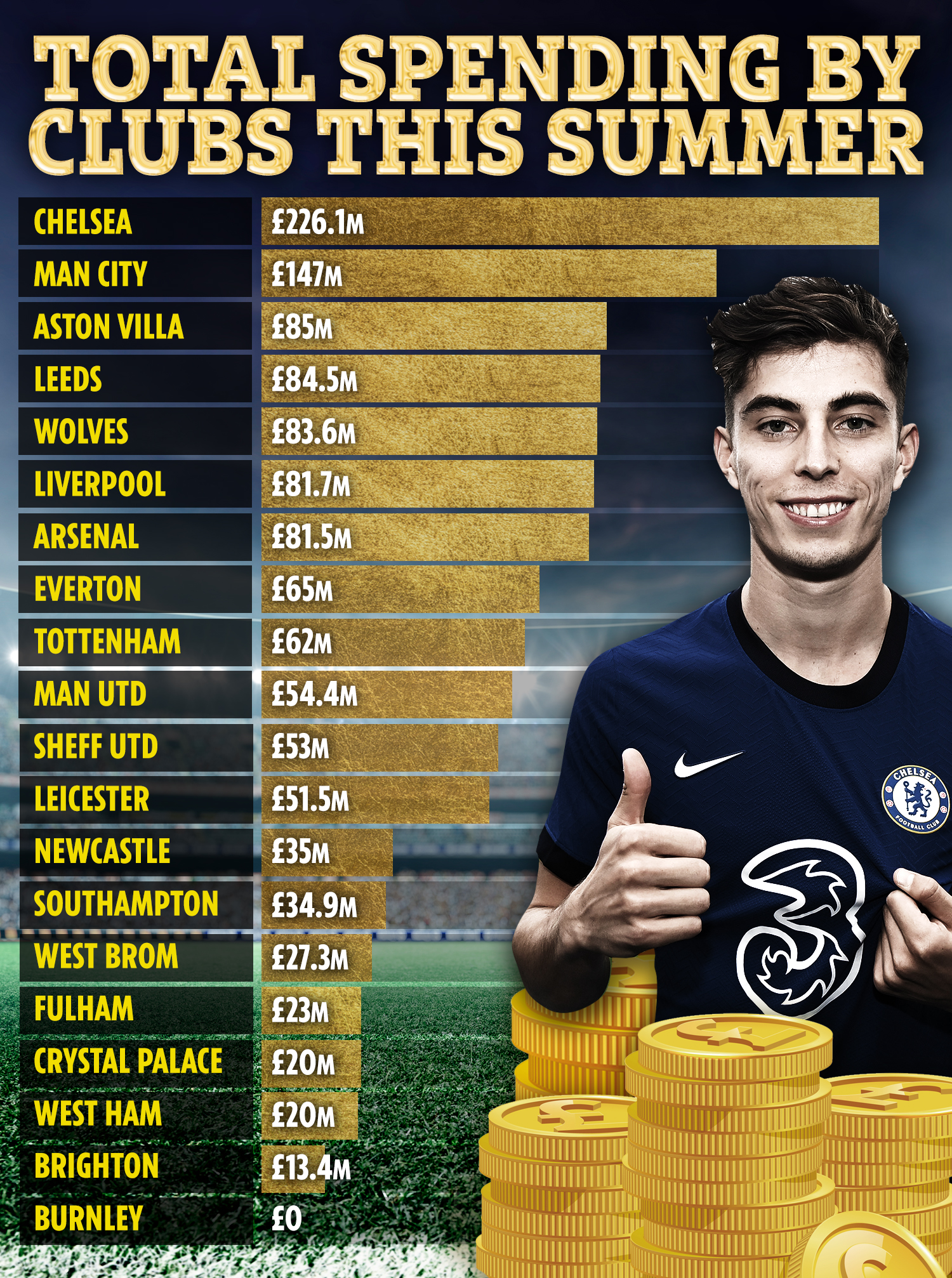 But who had the best window with the shrewdest buys thrashed out by the toughest negotiators – and who had the worst?

Here, SunSport goes through each team one by one and ranks them from top to bottom, with the figures from Sky Sports.

Sean Dyche has often gone above and beyond with what he has at his disposal at Turf Moor.

And, truth be told, this summer was probably more about hanging onto James Tarkowski than who they brought in.

Stephens, 31, was the only real name of note to come through the door after the Clarets rebuffed West Ham and Leicester time and again, with the Foxes willing to pay £30m for defender Tarkowski.

However, after three straight defeats to start the season, Dyche might be wishing he had got the cheque book out.

For months, all we have heard is how the England winger was the No1 transfer target.

Did he arrive? No. Little wonder Gary Neville branded the whole saga "embarrassing". 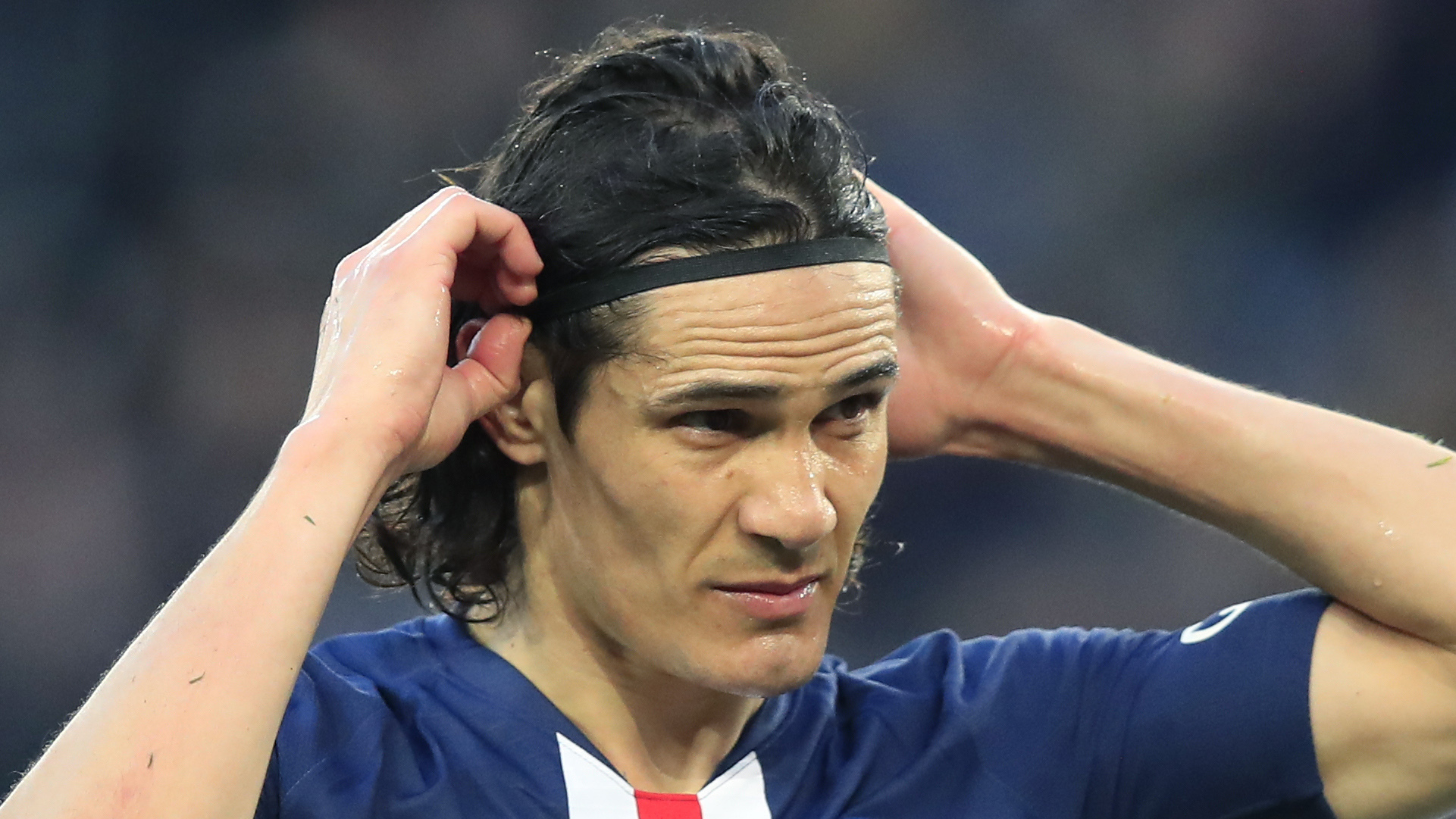 There is no denying Van de Beek is a top player, but it remains to be seen how he fits into a side with Paul Pogba and Bruno Fernandes.

The 6-1 thrashing by Spurs showed United desperately need another centre-back.

Did they get one? No. Fans must be fearing what happens next.

You simply have to think Brighton will be one of the teams battling to stay in the top flight come the end of the season – or well before.

Adam Lallana from Liverpool for nothing was a good bit of business but there is no doubt the pressure to stay up rests firmly on his shoulders.

Boss Graham Potter will expect big things of Zeqiri but the ex-Lausanne man is totally unproven at anywhere near this level.

It is no surpise that canny David Moyes saw the absolute necessity of tying down Soucek – who arrived on loan in January – after his goals ensured Premier League survival.

But that has failed to gloss over the horrible fallout over the sale of Grady Diangana to West Brom. 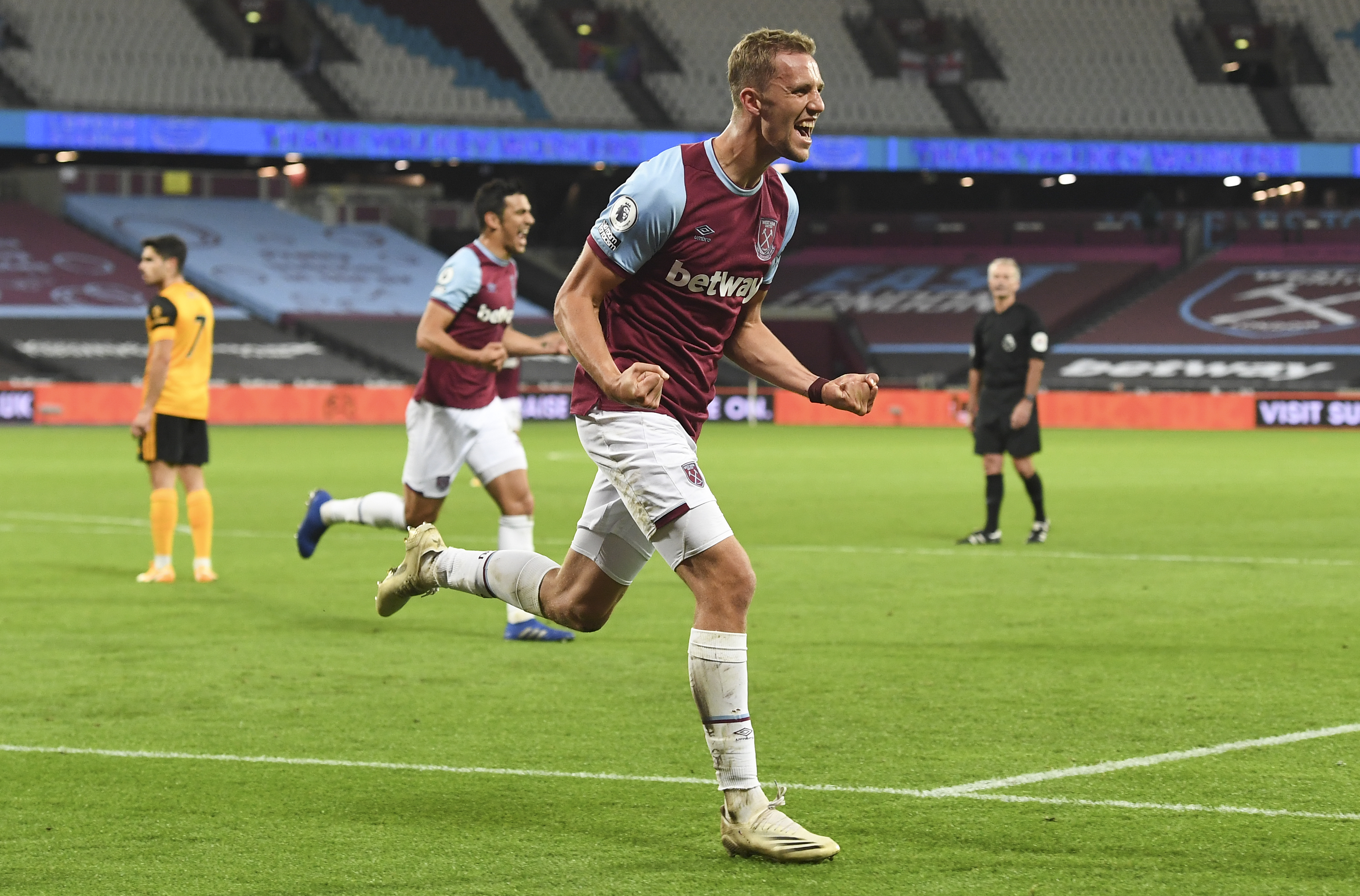 Plus points, however, for managing to keep hold of Chelsea target Declan Rice and, given his current goalscoring form, Michail Antonio.

The deadline day acquisition of a 31-year-old Theo Walcott, aside, this looks a bit 'touch and go' for Saints.

It was good business securing Kyle Walker-Peters from Spurs and Diallo looks one for the future.

But it is worth remembering he was brought in only after they missed out on Ibrahim Sangare, who went to PSV Eindhoven from Toulouse. 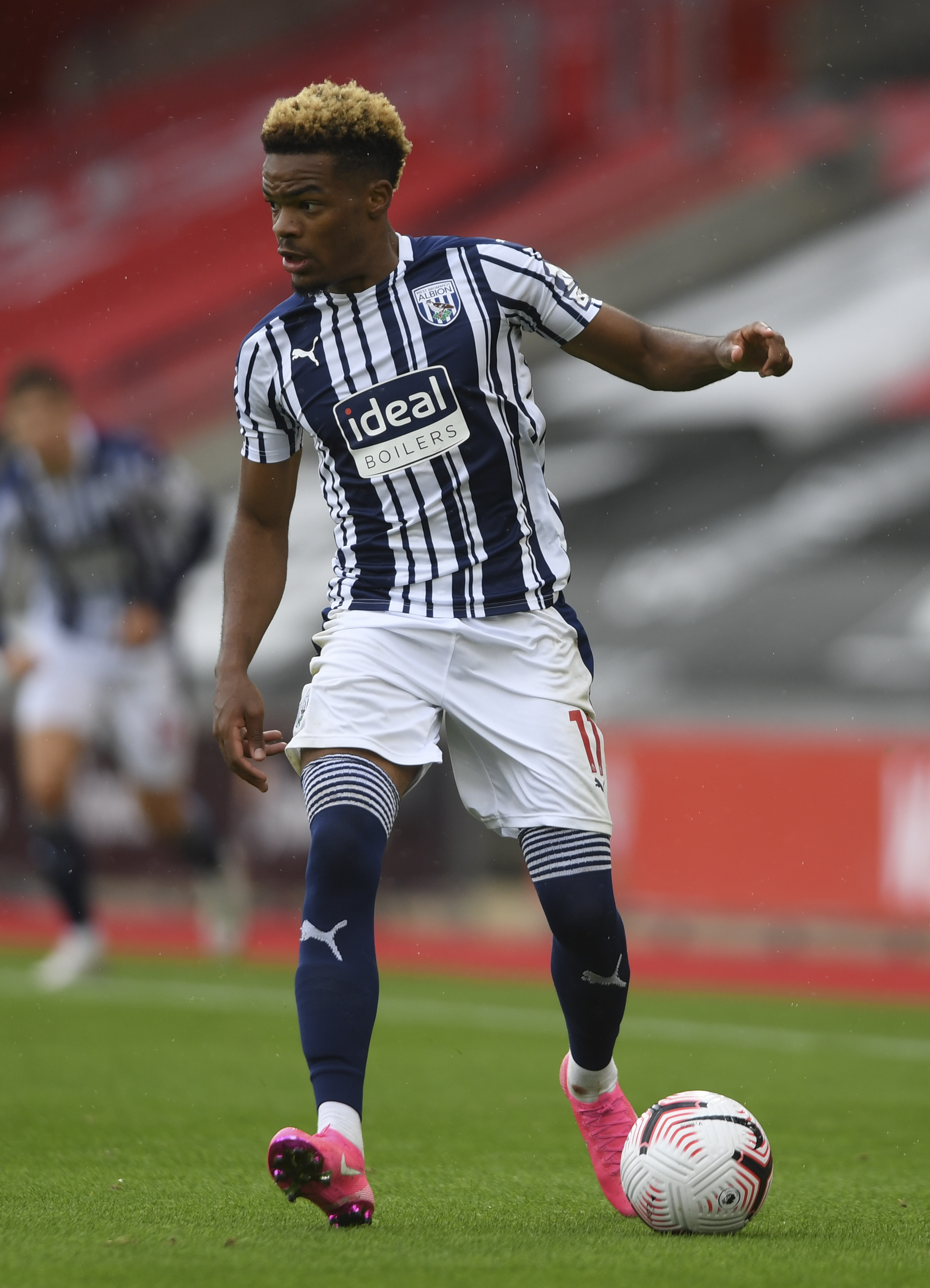 Diangana looks to be a good signing – but he still has plenty of promise to fulfil.

Slaven Bilic did well to keep hold of the spine of his side that won promotion but, compared to Aston Villa last season who splurged £130m after going up, you wonder if there is enough here to stave off a relegation fight.

Branislav Ivanovic brings a steady head and lots of experience while Matheus Pereira has already got a goal and two assists in four games.

THE Foxes looked nailed on for Champions League football until getting pipped at the post last season with just one win in their last five games.

The problems clearly were not up top because Jamie Vardy walked away with the Golden Boot.

So, Brendan Rodgers spent big on centre-back Fofana and right-back Timothy Castagne and the club surely had the best transfer announcement with the WWE-inspired Twitter unveiling of Cengiz Under.

It made zero sense, then, when West Ham put three past them at home last weekend.

Back to the drawing board.

Chris Wilder knew he needed goals and, credit to the board, they delivered with the signing of former Liverpool man Brewster.

Dean Henderson going back to Man Utd was a bitter blow and Aaron Ramsdale will need to step up to the plate after his £18.5m move from Bournemouth.

Jayden Bogle, Max Lowe and Chelsea man Ethan Ampadu can steady the ship after a bad start to the season.

Diogo Jota has already shown why Liverpool wanted him and selling Helder Costa and Matt Doherty to top flight rivals Leeds and Spurs will sting. 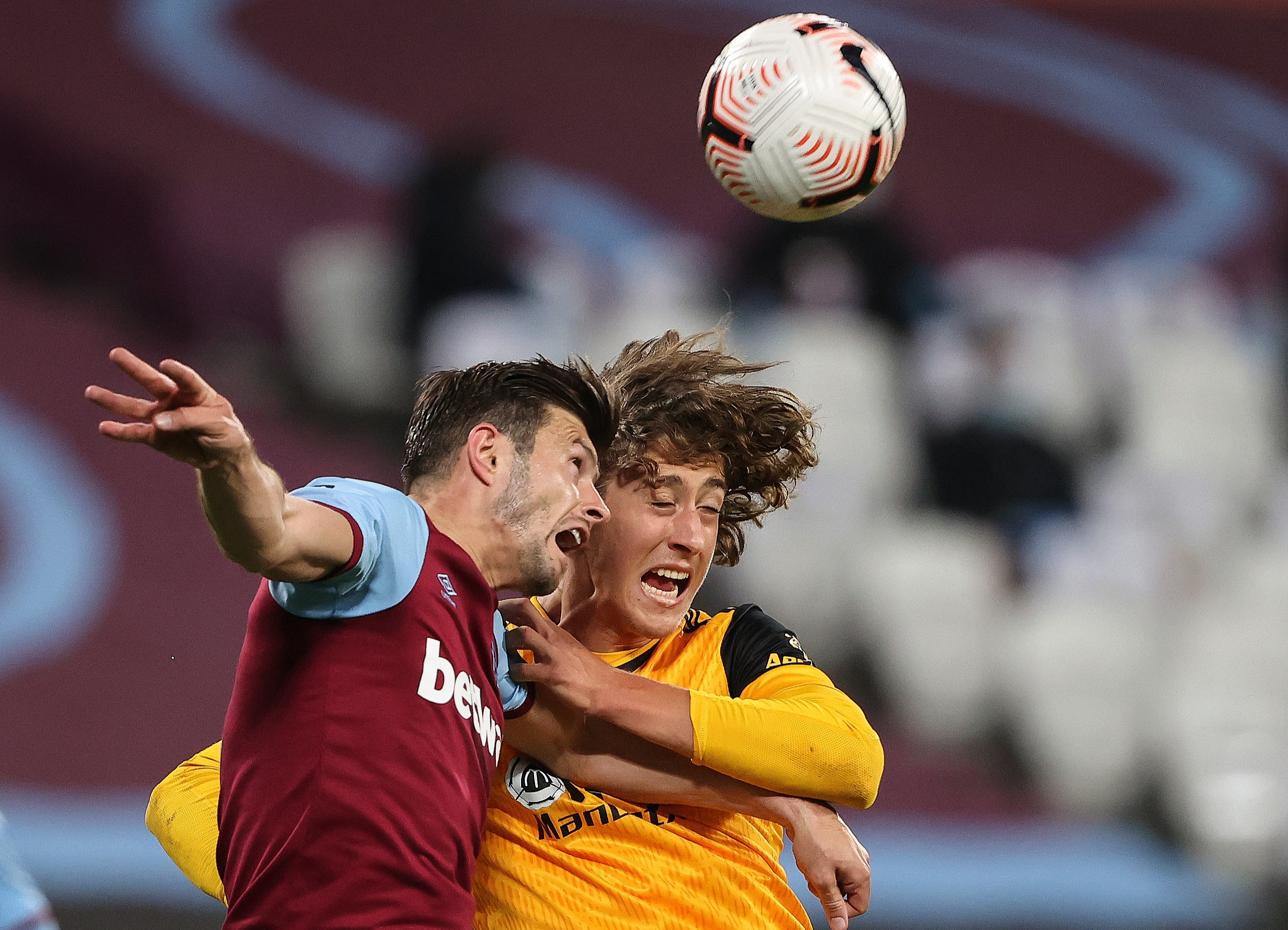 But club-record signing Silva plus ex-Barcelona man Nelson Semedo offer plenty of hope and excitement for the rest of the season.

For newly promoted sides, staying up more often than not depends on how many goals you concede rather than score.

Parker's side are rooted to the bottom of the table but there is at least hope they got the planning right with the signings of Man City's Tosin Adarabioyo and Joachim Andersen from Lyon.

Up the other end, Ruben Loftus-Cheek on loan from Chelsea, hungry to prove himself, could be a savvy move.

And Ademola Lookman – although another loan move – can work wonders.

Good work from Roy Hodgson, keeping hold of Wilf Zaha once again and bringing in brilliant prospect Eze from QPR.

He was the only expenditure, with Michy Batshuayi arriving on loan from Chelsea once again, along with Nathan Ferguson.

Could prove every effective spending come the end of the season.

No surprise to see City spending reach nine figures again but anything will be a let down after it looked like Lionel Messi could be arriving.

Some nice defensive reinforcements in the shape of Dias and ex-Bournemouth man Nathan Ake.

Ferran Torres looks a good replacement for Leroy Sane but Pep Guardiola may have liked one more forward with Sergio Aguero and Gabriel Jesus currently crocked.

Newcastle fans will think what could have been had the Saudi-led takeover not fallen through.

Still, Wilson has hit the ground running with four goals in his first four games for Steve Bruce's side.

And Ryan Fraser on a free from Bournemouth was a lovely bit of negotiating by Toon transfer chiefs.

As good as Marcelo Bielsa's side were in winning the Championship last season, the top flight is a whole different beast.

Luckily, they have had a brilliant summer, with club-record purchase Rodrigo even looking a relative snip at £27m. 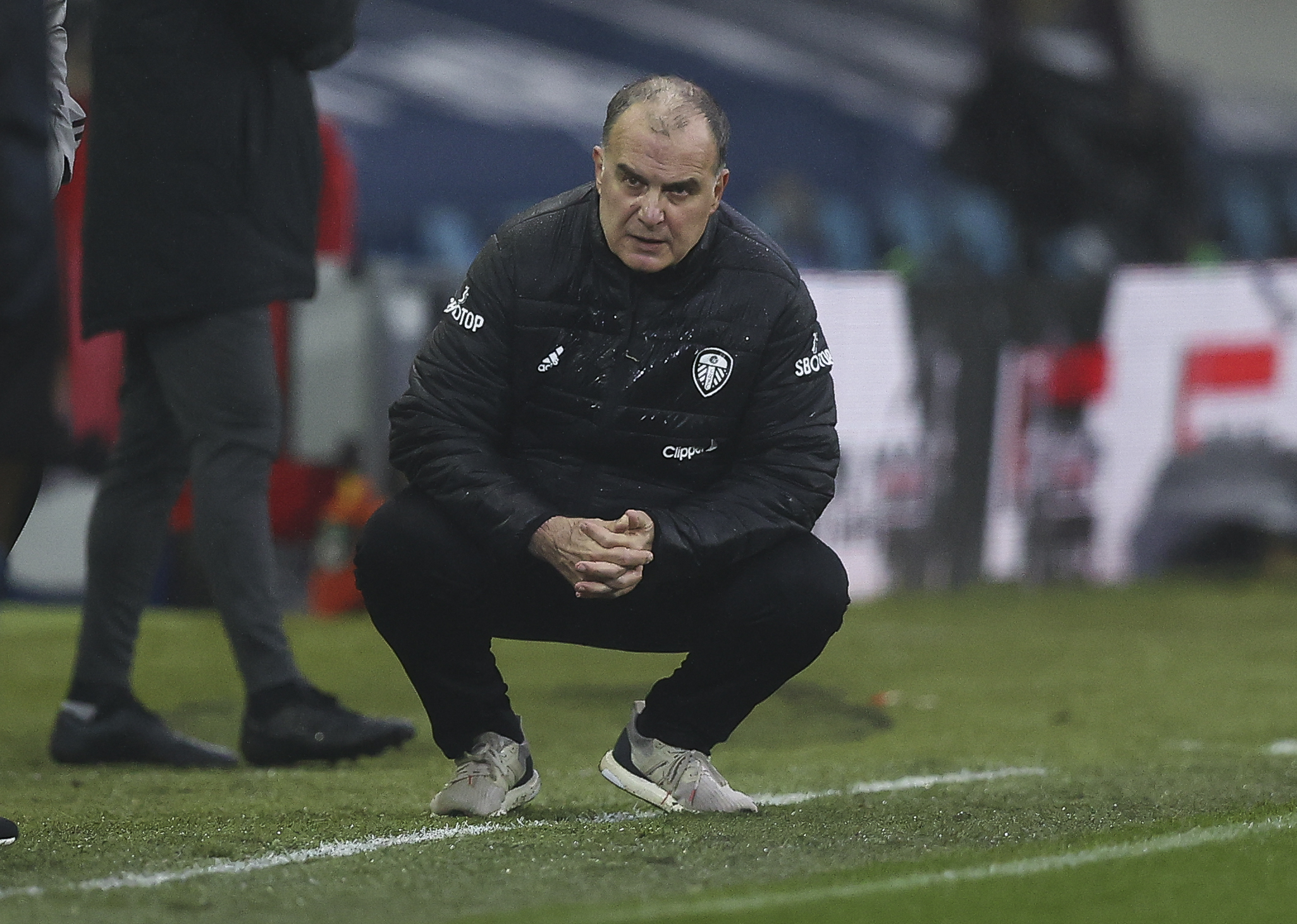 Helder Costa's permanent arrival looked like a move that had to happen and the late signing of Raphinha from Rennes adds more attacking intent to this incredibly exciting team.

Jurgen Klopp had a lovely problem to solve in trying to strengthen one of the best Premier League sides ever.

He did just that, bringing in Thiago from Bayern Munich just after he had won the Champions League.

Jota has already proven he can be a worthwhile back up should one of the killer front three of Mo Salah, Sadio Mane or Roberto Firmino get injured.

Anfield outfit might wish they had another defender, though, no matter how freakish the 7-2 defeat by Aston Villa was.

This got a lot LOT better than it could have been in the final hours of last night with the acquisition of long-term target Partey from Atletico.

Willian from Chelsea for free has looked a great signing, with Gabriel Magalhaes adapting to life well. 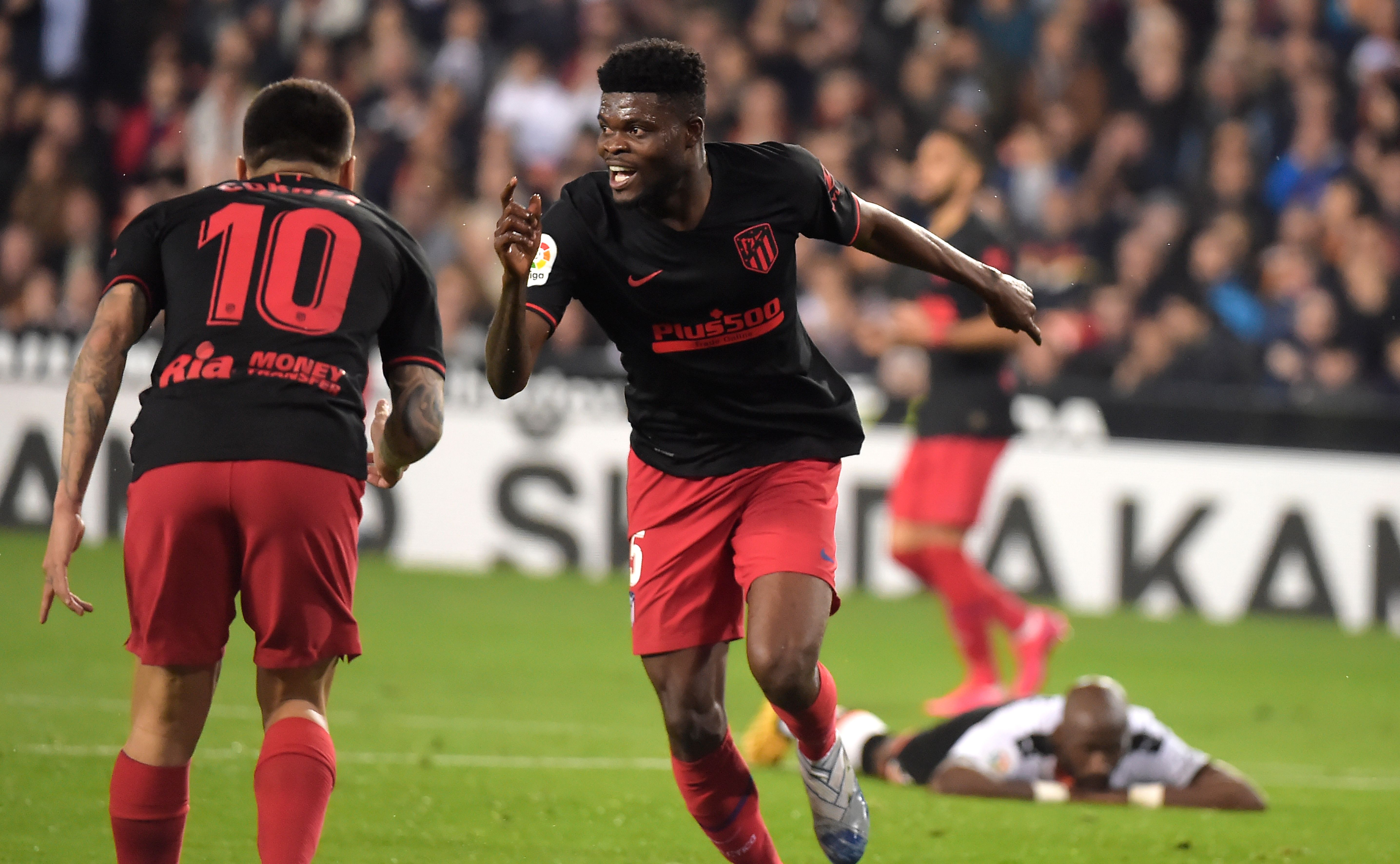 Arguably the biggest plus was getting Pierre-Emerick Aubameyang to sign a new deal worth a whopping £350,000 a week.

Harry Kane. Son Heung-min. Chuck in Gareth Bale and it is absolutely no wonder Jose Mourinho is purring over his attacking options this season.

Away from the headline acts though, Spurs looked to have plugged gaps in their side. 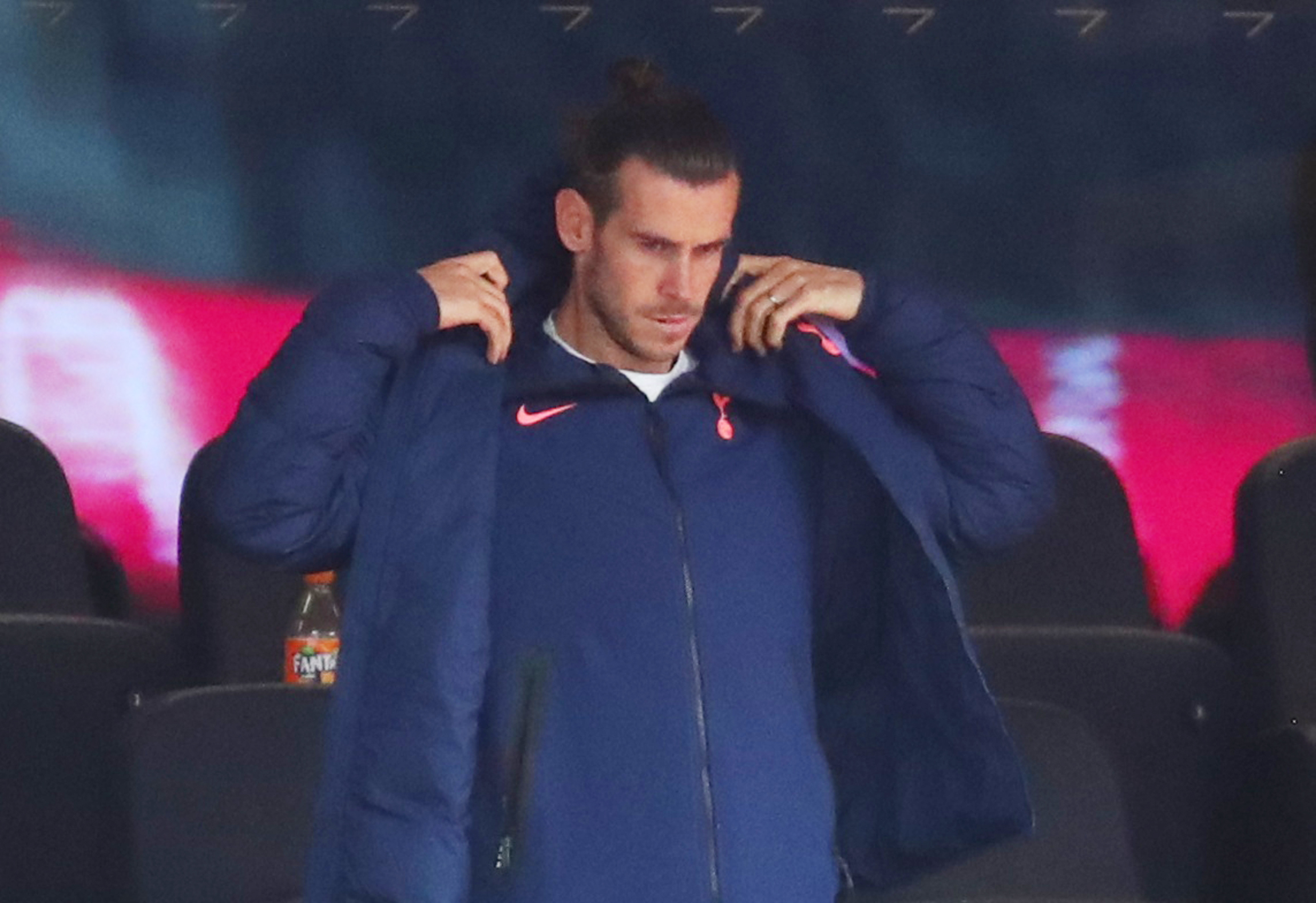 Carlos Vinicius arrives as back-up for Harry Kane, while Pierre-Emile Jojbjerg has attacked strength and a bit of steel to the midfield.

Mourinho will be expecting big things this season – schedule permitting.

No one spent more – but that doesn't necessarily mean they spent best.

Time will tell on that front, but on paper, Frank Lampard's bumper summer (coming after that transfer embargo) is brilliant work.

Havertz, Timo Werner and, though we are yet to see him, Hakim Ziyech present a totally new attacking threat.

The Toffees' best bit of business this summer could have been their cheapest.

Carlo Ancelotti has turned James Rodriguez – who arrived from Real Madrid on loan – into a world beater once again.

Allan and Abdoulaye Doucoure look comfortable in the middle of the park and Ben Godfrey, who arrived on deadline day, can shore up the back line in front of Jordan Pickford.

Yes, arguably the England keeper could have been replaced, but with four wins from four to start the season, there is more than enough to keep Everton going forward. 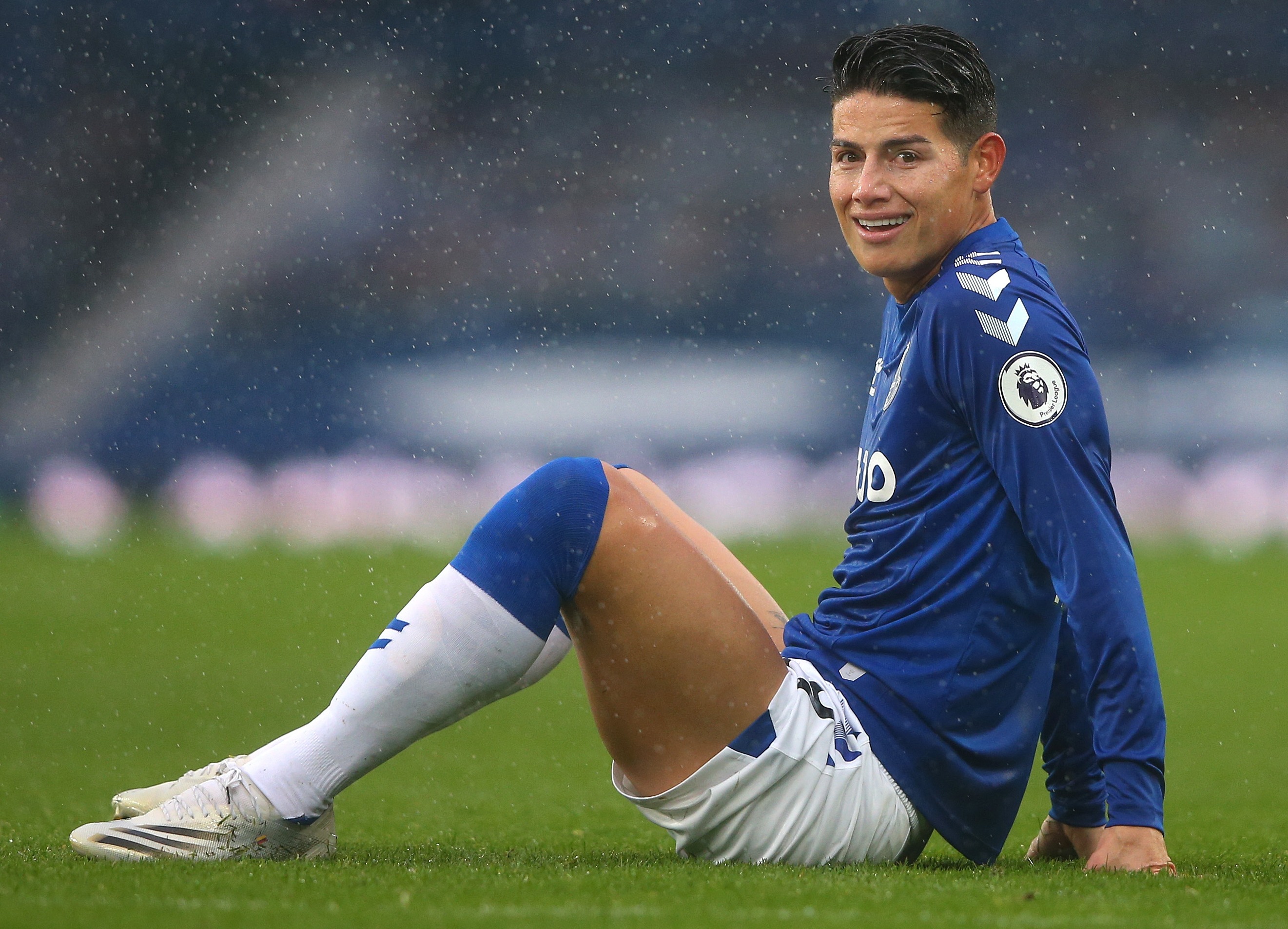 Fresh after spending £130m last summer, Dean Smith's side are back at it.

Although this time they have arguably invested more wisely while staking around £45m less – just see the 7-2 win over Liverpool. 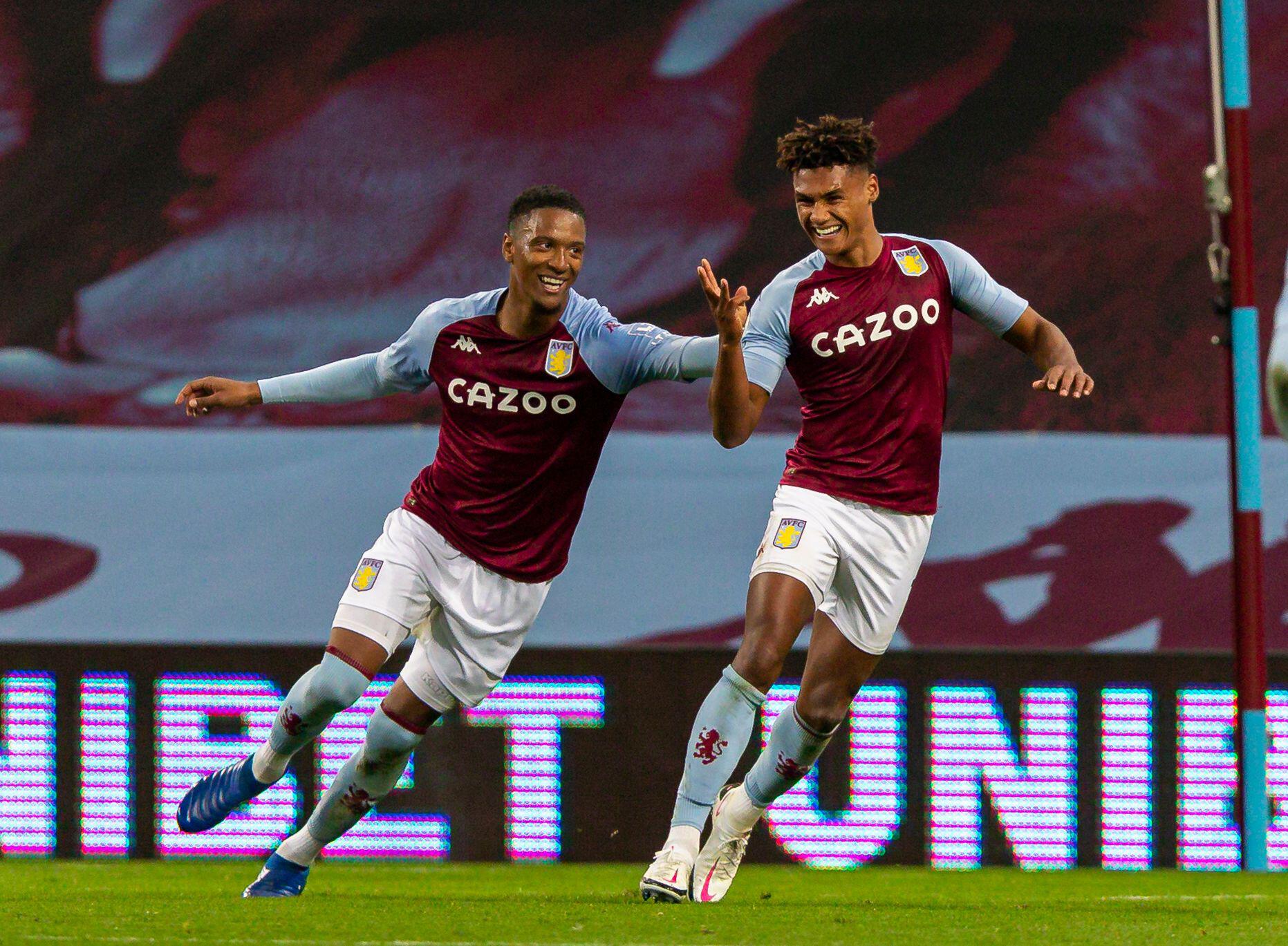 Club-record signing Watkins has proved little short of genius while ex-Gunners keeper Emiliano Martinez said moving to the Midlands was a step up in his career.

Jack Grealish signed a new deal despite being linked with Man Utd, Matty Cash and Bertrand Traore are full of promise and Ross Barkley arrives with a point to prove.

Spot in Europe next year, anyone?

END_OF_DOCUMENT_TOKEN_TO_BE_REPLACED

END_OF_DOCUMENT_TOKEN_TO_BE_REPLACED
Recent Posts
We and our partners use cookies on this site to improve our service, perform analytics, personalize advertising, measure advertising performance, and remember website preferences.Ok