Home » Sport » Rash of Injuries Has the N.F.L. Pointing Broken Fingers at Each Other

Rash of Injuries Has the N.F.L. Pointing Broken Fingers at Each Other

Many high-profile N.F.L. stars suffered significant injuries on Sunday. The San Francisco 49ers lost quarterback Jimmy Garoppolo, Pro Bowl defender Nick Bosa, running back Raheem Mostert and others in their victory over the Jets. Carolina Panthers running back Christian McCaffrey suffered an ankle injury that is expected to sideline him four-to-six weeks.

Giants running back Saquon Barkley tore his anterior cruciate ligament, as did Seattle Seahawks defender Bruce Irvin, Denver Broncos wide receiver Courtland Sutton and others (including Bosa). And those are just the biggest names who went down in one weekend.

In a typical year, Sunday’s injury outbreak would be partially blamed on the rigors of the off-season — grueling training camps and meaningless preseason games in which players absorb unnecessary punishment. This year, it’s tempting to blame Sunday’s injuries on the absence of preseason games and a pandemic-truncated off-season that left little time to get into shape.

It’s possible that some players were not quite game-ready in the opening weeks because of upended workout routines and the shortened training camp. It’s also irresponsible to draw conclusions based a handful of isolated incidents. After all, conventional wisdom also suggested that N.F.L. games would look like the sloppy combination of a kindergarten fire drill and a medieval peasant revolt because of the cancellation of those all-important preseason rehearsals. In fact, play has been crisp over the first two weeks. Also, Week 1 was (by N.F.L. standards) relatively light on injuries.

Some teams have been harder hit so far than others. The Broncos, for example, lost All-Pro defender Von Miller during camp and quarterback Drew Lock for two to six weeks to a shoulder injury on Sunday, in addition to Sutton and others.

Pointing fingers at individual coaches or organizations would be inappropriate. Team-by-team training regimens vary wildly in normal circumstances and surely varied even more as coaches and team staff adjusted on the fly. While most organizations used the best available sports science to keep players at close to football shape, a few may have told the guys to rub some dirt on the pandemic and go straight to the blocking sleds.

Some teams just have notoriously rotten injury luck, even when jogging through spring walk-throughs. The Los Angeles Chargers, for example, were fortunate this year that their entire rookie draft class didn’t electrocute themselves while logging onto Zoom meetings. 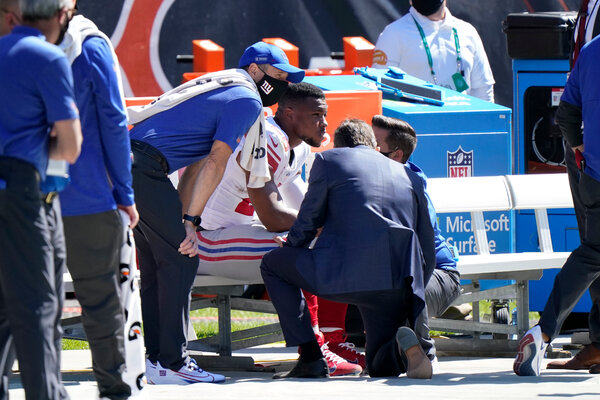 The new turf at MetLife Stadium is also a suspect in this week’s injury mystery, with 49ers players referring to it after Sunday’s game as “sticky” and “trash.” Subtle defects in a playing surface can have a major impact on elite athletes performing at peak capacity and effort, which explains why the Jets weren’t affected.

The N.F.L. is reportedly investigating the MetLife situation in advance of Sunday’s 49ers-Giants game. If the turf really does exacerbate injuries, the 49ers may have to call Joe Montana and Jerry Rice out of retirement to get them through the season.

While Sunday’s list appears unusually long, the inclusion of big names often turns injuries into a bigger story than the typical weekly rundown of battered offensive linemen and backups. The losses of Barkley and McCaffrey, in particular, were a major blow to millions of fantasy football enthusiasts. Forget the 49ers or Broncos: The real crisis this week is that your cousin Carmine’s Metuchen Murder Hornets will use up all of their fantasy waiver points.

This year’s N.F.L. injury uptick even appears to be slightly behind schedule. There’s typically an annual outcry to curtail or eradicate the preseason in mid-August, at the precise moment when a handful of noteworthy preseason injuries dovetails with midday television sports-talk hosts’ mounting boredom with training camp news.

In past years, the same players hurt on Sunday might have gotten hurt weeks earlier in a game that didn’t even count to his team’s record. That wouldn’t have made their injuries less devastating, personally or to their franchises, but that timing would also have made the news less immediate and dramatic.

The simple truth is that most football injuries are not caused by disruptions in conditioning routines or the friction coefficient of the playing surface, but by huge men crashing at full speed into one another. Lock, for example, was hurt when Pittsburgh Steelers defender Bud Dupree slammed his shoulder to the ground. Bosa’s leg twisted at an unnatural angle when he was driven backward by a blocker onto a pile. Nothing that happened in June or August could really have protected them.

The truncated off-season is a possible contributing factor in some cases, but the league’s pandemic procedures also mean that teams are more capable of coping with injuries than they would be in a typical year. Practice squads are expanded, injured reserve protocols are more flexible, and teams are (theoretically) ready to call upon free agent reinforcements, whether to play through a coronavirus outbreak or a bunch of high ankle sprains.

So while the 49ers’ playoff hopes are in jeopardy, the Giants’ latest rebuilding plan is in peril and many well-known players face weeks or months of challenging rehabilitation, the current N.F.L. injury rash will have no more impact on the league itself than many others had in the past.

Meanwhile, the annual argument about whether the preseason is helpful or harmful will wage on until sports medicine discovers optimal practice procedures that get players fully ready to play without subjecting them to undue strain. N.F.L. coaches will then reject those procedures because they sound too scientific and not enough like “real football.”

END_OF_DOCUMENT_TOKEN_TO_BE_REPLACED

END_OF_DOCUMENT_TOKEN_TO_BE_REPLACED
Recent Posts
We and our partners use cookies on this site to improve our service, perform analytics, personalize advertising, measure advertising performance, and remember website preferences.Ok