Rays Jump on Yankees’ Pitching Trickery to Even Series

SAN DIEGO — The Yankees surprised many when they tabbed Deivi Garcia, a 21-year-old rookie pitcher, to start Game 2 of their American League division series on Tuesday at Petco Park — including Garcia himself. And while Manager Aaron Boone was understandably coy before the game when asked how long he planned to use the largely unproven Garcia, the answer arrived only moments into the young pitcher’s start.

The Yankees employed a bit of trickery against the rival Tampa Bay Rays — using Garcia, a right-hander, for only one inning before turning the game over to the left-handed J.A. Happ — in an attempt to exploit matchups. It seemed like it might work: The Rays, a deep roster built to take advantage of most any situation, had started five left-handed batters.

Perhaps the plan, though, was too cute for the Yankees’ own good. It certainly backfired when Happ, who said after the game that he had told the team he preferred to start in the first inning, struggled. And despite two more towering home runs from Giancarlo Stanton, the Yankees took their first loss of this postseason, a 7-5 defeat to the Rays, to even the best-of-five series at one game apiece.

“You’re playing a unique team that does a really good job of building a roster to create platoon advantages, so just trying to counter that a little bit and force their hand a little but early in the game,” Boone said in explaining the pitching decision. “Unfortunately, it didn’t work.”

After the game, a clearly frustrated Happ was terse. He admitted he was initially surprised by the plan to start Garcia, and he added that there was a specific moment the Yankees wanted to bring him into the game.

Boone, however, said he had simply targeted a short outing from Garcia — not necessarily one inning — and hooked Garcia after a 27-pitch first inning in which he allowed a home run. Only a few pitches into Garcia’s start, the Yankees had Happ, who had not pitched since Sept. 25 and whose pitching schedule was disjointed all year, warming up in the bullpen.

“They know how I felt about it,” Happ said. “Ultimately, I pitch when I pitch and you got me. There is no hesitation and no dwelling on what was going on. I was focused on trying to perform. I wish I had done a better job.” 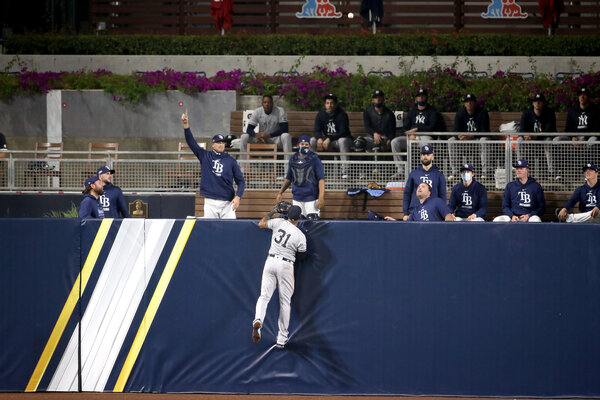 Stanton single-handedly kept the game from getting more lopsided. He drove in four runs with two homers off Glasnow, including a three-run blast in the fourth inning that was measured at 458 feet but felt like much more.

Stanton, a highly prized slugger in the middle of the Yankees’ lineup, has struggled in past Octobers, sometimes hindered by injuries. But with Tuesday’s performance, he now has five home runs in four games this postseason. He had four home runs in 23 games during an injury-slowed regular season.

He joined Reggie Jackson and Lou Gehrig as the only Yankees to homer in four straight postseason games. The only other player in major league history with five home runs in his team’s first four playoff games in a single year was Juan Gonzalez, who accomplished the feat with the Texas Rangers in 1996.

“That’s pretty cool, but that’s stuff you look at after the year is done,” Stanton said.

If the Yankees don’t advance out of this series, they may look back at Game 2 in a harsh light. Entering Tuesday, there was always a possibility the Yankees could use Garcia as an opener — a strategy popularized by the Rays in past seasons and employed by the Yankees last year, but not during the 2020 regular season.

While the Yankees believed in Garcia, the team’s youngest starting pitcher in postseason history, he wasn’t nearly as experienced as Happ, who had emerged as the team’s No. 3 starter during the regular season with a 3.47 earned run average. Garcia said he know he wasn’t pitching deep into Tuesday’s game, so he wasn’t surprised when he was lifted after one inning.

“I have a lot of trust in the manager,” he said.

Soon after taking the mound, Happ coughed up a two-run home run to Rays catcher Mike Zunino. An inning later, he surrendered a two-run blast to Manuel Margot and made a wild throw to first base. Happ lasted two and two-thirds innings, allowing five hits and four earned runs, and the Rays continued to pile on against Yankees relievers Adam Ottavino and Jonathan Loaisiga.

Asked after the game if he had been put in a position to succeed, Happ said, “That’s not a question for me to answer. When I’m out there, I’m trying to do the best I can.”

The Yankees will next hand the ball to Masahiro Tanaka, normally a postseason stalwart, for Game 3 on Wednesday. Beyond that, the Yankees’ pitching plans are less than desirable: Jordan Montgomery, who posted a 5.11 E.R.A. during the regular season, could be in line to start Game 4, and Gerrit Cole, the Yankees’ ace who led them to a Game 1 win, may have to pitch on short rest for the first time in his career in Game 5.

END_OF_DOCUMENT_TOKEN_TO_BE_REPLACED

END_OF_DOCUMENT_TOKEN_TO_BE_REPLACED
Recent Posts
We and our partners use cookies on this site to improve our service, perform analytics, personalize advertising, measure advertising performance, and remember website preferences.Ok