SINGAPORE – The practice session in Oman on April 1 had ended like so many others, with windsurfer Amanda Ng taking her board out of the water as she wrapped up her preparations for the Mussanah Open Championship.

But as she trod on the slippery surface, she slipped and as she landed, she was greeted by pain.

The pain in her left knee rendered her unable to stand or walk.

It was followed by mental anguish as her Olympic campaign – the regatta was the Asian qualifier for the upcoming Tokyo Games – was suddenly in jeopardy.

She was rushed to a hospital, where an X-ray ruled out any broken bones. But little was known about the nature of the injury as no scans were done.

A long-distance phone call to Dr Ben Tan, chief of sports medicine at Changi General Hospital and himself a former Olympic sailor, reassured her that she could still compete.

But Ng did better than that. She not only competed but also topped the three-woman RSX field in Oman, completing 13 races despite having a suspected tear in her medial collateral ligament.

The 27-year-old, who has been using a wheelchair since the fall, told The Straits Times on Thursday (April 8): “I was distraught. I couldn’t even stand or walk and the pain was really bad.

“I’m very happy and relieved (to have qualified). I was overjoyed and so thankful for all the help and support that I’d gotten.”

But it was not all smooth sailing for Ng. On the first day of racing just two days after the fall, she finished behind her two rivals – the Philippines’ Charizanne Napa and India’s Ishwariya Ganesh.

Mired in doubt and despair, it took an army to raise her spirits, with her coach Alistair Masters, her family and friends in Singapore, including her church community who prayed for her, all encouraging her on.

“My first day was quite bad, I was really far behind, but my coach was saying, ‘On the positive side, you have two finishings, so there’s still a chance for you to fight back’,” said Ng, who also competed at the 2016 Rio Games, finishing 20th in the women’s 470 with Jovina Choo.

“All this support from people around me helped to keep me going.”

She tweaked her technique to avoid placing too much weight on her knee and relied on her arms more, to the point that “they felt like they were going to drop off”.

But she defied the pain in her leg and the discomfort in her arms, and her performances improved throughout the week, culminating in a first-place finish in the medal race on Thursday. Her tally of 17 points put her in front of Napa (24) and Ganesh (37). 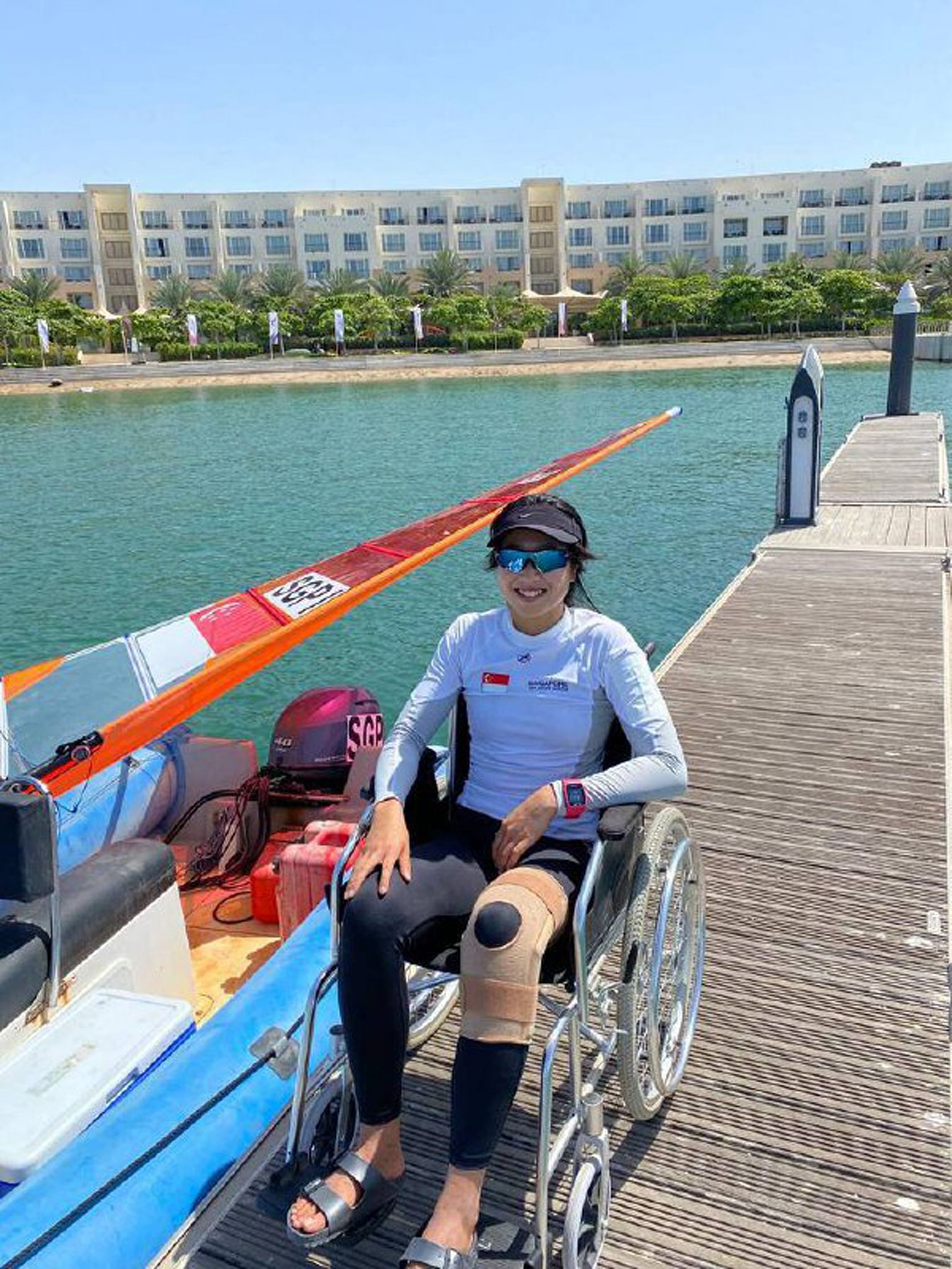 “We thought it was an April’s Fool joke but it wasn’t. We were very concerned for her when she sent a photo of herself on a wheelchair, but knowing Amanda, she is mentally fit and strong, such misadventure is just a test for her grit, tenacity, and commitment to remain formidable, like they say, what won’t kill you makes you stronger,” said Singapore Sailing general manager and high performance head, Chung Pei Ming.

Compatriot Ryan Lo also secured an Olympic quota spot in the Laser Standard class, wrapping up the competition with 31 nett points, well ahead of India’s Vishnu Saravanan (53), who clinched the second and final Olympic berth.

Lo and Ng will be nominated by the Singapore Sailing Federation (SSF) by virtue of being the top local sailors at the Asian qualifiers.

Kimberly Lim and Cecilia Low have already earned Singapore a place in the 49erFX event after they came in 15th at the Hyundai 49er, 49erFX and Nacra 17 World Championships in 2019.

More on this topic