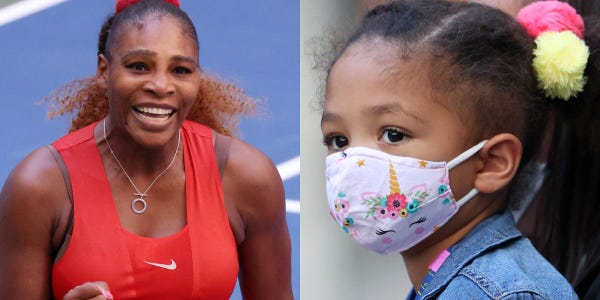 Though spectators aren't permitted at the US Open this year due to the coronavirus pandemic, Serena William's 3-year-old daughter, Alexis Olympia Ohanian Jr., cheered on her mom during her third-round match against Sloane Stephens on Saturday.

The toddler sat in the nearly empty stands with her dad, Alexis Ohanian. Both of them wore masks — Olympia's clad with pink unicorns, and Ohanian's emblazoned with the term "GIRL DAD."

As Williams took a moment to sip her water bottle on the court, she caught a glimpse of Olympia pointing toward her and saying, "Mama." The tennis star then made eye contact with the toddler and enthusiastically waved back at her.

Williams won the match against Stephens, walking away with a 2-6, 6-2, 6-2 victory. While speaking with the media following the win, she admitted that she forgot her daughter was coming to the match.

"I forgot she was coming out," Williams, who wore a black mask during the interview, said.

The reporter then asked what she hopes Olympia took away from watching the match.

"I hope that she saw her mama fighting," she told the reporter. "I don't think she was paying attention, between you and me. She may have been playing with some princesses upstairs."

While Olympia seemed to bring good luck for Williams on Saturday, the tennis star recently panicked when she thought the toddler was choking in the stands during the Top Seed Open in Lexington, Kentucky, on August 11.

"I know my baby's cough," the athlete said at a press conference after the match, as reported by Baseline. "She was drinking, and she was eating grapes. And I'm then like, 'Oh my gosh is she chewing? Make sure you chew.'"

Williams said she tried not to glance over at her husband and child, intent on remaining focused on the game.

"I didn't look over there but I kind of flashed my husband a look like, 'Make sure she's chewing her grapes because she shouldn't be coughing while she's eating grape,'" she said. "That's the new mom in me, and it's good."

Williams previously spoke about juggling her tennis career with motherhood during a February interview with Today.

"I don't know how moms do it," she said. "I work a lot, and I can't imagine working a full day like most working women and then go back to their babies. I'm fortunate enough that I have days off, and I get to make my schedule and then can spend the rest of the day with her. And that's still hard."

Because playing a sport professionally requires frequent travel, Williams said it's never easy to leave her daughter at home during a trip.

"As an athlete, you can't be vulnerable," Williams told the outlet. "You have to be strong. As a mom, you're completely vulnerable to everything. And that's what makes it scary."

END_OF_DOCUMENT_TOKEN_TO_BE_REPLACED

END_OF_DOCUMENT_TOKEN_TO_BE_REPLACED
Recent Posts
We and our partners use cookies on this site to improve our service, perform analytics, personalize advertising, measure advertising performance, and remember website preferences.Ok