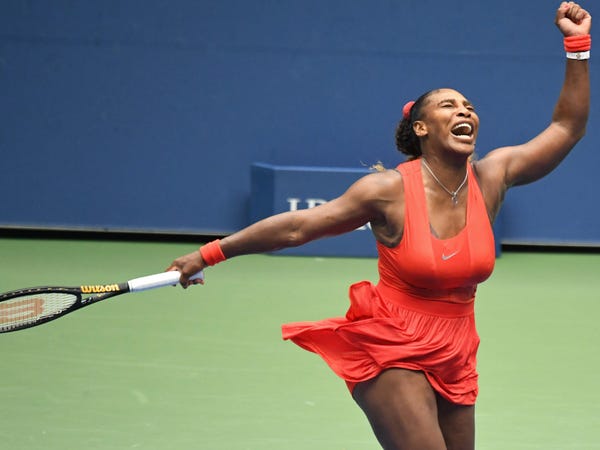 Serena Williams struggled at the beginning of her 2020 US Open quarterfinal match, but managed to turn things around thanks to one incredibly quirky play.

The 23-time major champion was already down a set when she returned a serve from Bulgarian veteran Tsvetana Pironkova using her left hand.

Rather than shifting her feet to hit a forehand shot from her right side, or, as is more conventional, returning the serve with a backhand swing, Williams held the racket with her non-dominant hand and managed to keep the ball in play.

Williams went on to win the point, and her lefty return seemed to shift the momentum enough at Arthur Ashe Stadium Wednesday afternoon to spur a comeback for the 38-year-old. She went on to win the second set 6-3 before taking a dominant 6-2 victory in the third set.

Widely considered the greatest tennis player in the history of the game, Williams is just one major championship victory away from tying Margaret Court's record 24 career Grand Slam singles titles.

Williams hasn't won any of the sport's four major tournaments since she took home the Australian Open title in 2017, but she'll move on to face either Victoria Azarenka or Elise Mertens in the tournament semifinals on Thursday.

END_OF_DOCUMENT_TOKEN_TO_BE_REPLACED

END_OF_DOCUMENT_TOKEN_TO_BE_REPLACED
Recent Posts
We and our partners use cookies on this site to improve our service, perform analytics, personalize advertising, measure advertising performance, and remember website preferences.Ok