ROD STUDD'S voice breaks with emotion and tears well up in his eyes as he starts to retell the dramatic night he had a stroke.

For the popular and respected Sky Sports darts commentator, it is hard to remember every detail that happened to him and his family on the evening of May 19, 2020. 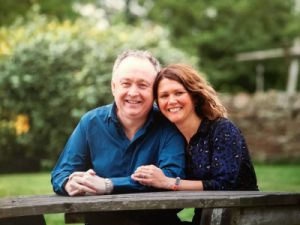 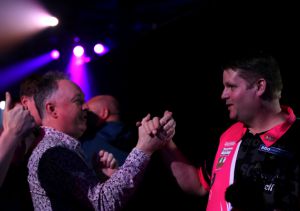 There are certain things, of course, he can recall vividly.

The strange sensation coursing through his body as the stroke began. The gravity of the situation as he collapsed to the floor.

Other parts have mercifully been blanked from his memory.

The journey in the ambulance. The Covid tests administered by the paramedics. The first night spent in hospital.

Above all, though, there is one thing of which he is certain – just how lucky he was to survive.

Not just that his quick-thinking wife Louise identified the signs of a stroke immediately – insight she had gleaned from watching an old TV advert.

More the fact it happened in the safety of his home during a nationwide lockdown.

Had he been on the usual family walk – or even alone in a hotel room away on darts duty – tragically it could have been a different outcome.

Studd, 53, told SunSport: “It was a Tuesday evening and my wife had me on washing duties.

“Suddenly, I felt unwell, a bit woozy. I realised I couldn’t pick my feet up. It was like they were in quicksand. Then I collapsed in the back garden.

“The kitchen door was open and Louise found me on the floor by the washing line.

“I said: ‘I think I’m having a stroke.’ Louise was very alert to the situation and rang an ambulance straightaway. I don’t know what would have happened if she hadn’t.

“That was a crucial time. I cannot remember too much else until I woke up in a hospital bed.

“We live in a rural area but the ambulance was here in about 15-20 minutes, whisking us off to Halifax Calderdale Royal hospital 20 miles away.

“During the first lockdown, my wife and two sons would go on a family walk each night for fresh air.

“We’d walk along some fields and into the woods. Sometimes we split up. Sometimes I’d be 100 yards ahead.

“If I had collapsed then, maybe Louise wouldn’t have found me. It’d have certainly delayed the ringing of the ambulance. It was a stroke of fortune it happened when it did.”

My wife Louise was very alert to the situation and rang an ambulance straightaway. I don’t know what would have happened if she hadn’t.

Studd, who had a bleed on the brain, has agreed to tell his story in support of the new Public Health England and Stroke Association FAST Campaign, which aims to highlight the symptoms of a stroke. A campaign that could save many lives.

Put simply, these are the questions to ask: Is someone’s Face drooping? Can Arms be raised? Is Speech slurred? If yes, don’t waste Time and dial 999.

Studd spent 37 nights in hospital before being released on June 25 to begin the difficult process of rehab.

Every week he undergoes four sessions of intense physio, working to improve the muscles and strength on the left side of his body.

Things he took for granted, the simple act of walking, had to be relearned gradually.

Studd’s speech and cognitive functions have not been affected. “I’ve been lucky in that regard,” he noted. “Or unlucky because the viewers will have to put up with my voice again! And the puns, too.”

BBC presenter Andrew Marr and four-time US Olympic champion runner Michael Johnson have both had strokes but returned successfully to broadcasting.

His employers Sky Sports, whom he joined in 1999 first as a rugby league reporter, have shown tremendous patience towards his recovery.

Though he didn’t attend Ally Pally over Christmas for the PDC World Darts Championship for the first time in over a decade, he was an avid viewer at home.

Studd said: “When I watch the darts I’m sort of commentating in my head.

“I’m do what cricketers might call a ‘net session’. I’m mumbling to myself commentary lines. Louise often asks: ‘What are you talking about?’”

Studd is determined to return to the mic but won’t place a time scale on his comeback.

Nonetheless, the day he is back taking the mickey out of sparring partners Wayne Mardle and Stuart Pyke at a live darts event in front of a jubilant crowd cannot come soon enough.

He added: “Wise people I know from my days on Sky’s rugby league department, who had bad injuries, told me: ‘Get it into your head that you’ll be back – but don’t set a date.’

“I’m very grateful for all the messages, either from darts players, commentators or social media. It’s all very humbling.”

For more info on the FAST campaign please visit stroke.org.uk/ActFAST 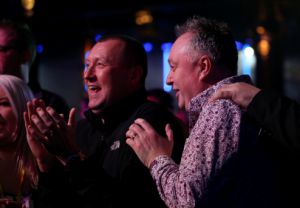