Home » Sport » Sugar Rodgers Is Rewriting Her Life Story Through the W.N.B.A.

Sugar Rodgers Is Rewriting Her Life Story Through the W.N.B.A.

For much of Sugar Rodgers’ life, her job was survival: staying alive, healthy and out of jail in her Suffolk, Va., neighborhood, where the pop of bullets nearby forced her inside and away from the basketball hoop she loved.

When many eighth graders were buckling down on schoolwork and extracurricular activities, or skipping school to hang out with friends, Rodgers was truant for other reasons: to babysit her nephew while his mother was at work, or to feed and bathe her bedridden mother, who was dying of lupus.

“‘What goes on in this house stays in this house,’ ” Rodgers said her mother told her. “So, I couldn’t reach out and ask people for help and do certain things because that always stemmed in the back of my mind.”

Still, Rodgers said, she finished eighth grade on time by doing extra assignments, and stayed on track academically throughout high school. She was recruited to play basketball at Georgetown, and graduated as the career scoring leader. The Minnesota Lynx selected her in the second round of the 2013 W.N.B.A. draft, and she helped them win a championship that year.

She played the next five seasons with the Liberty, where she became an All-Star and won the Sixth Woman of the Year Award in 2017. Now, after two seasons playing with the Las Vegas Aces, Rodgers has matriculated into the coaching ranks as an assistant for the team. 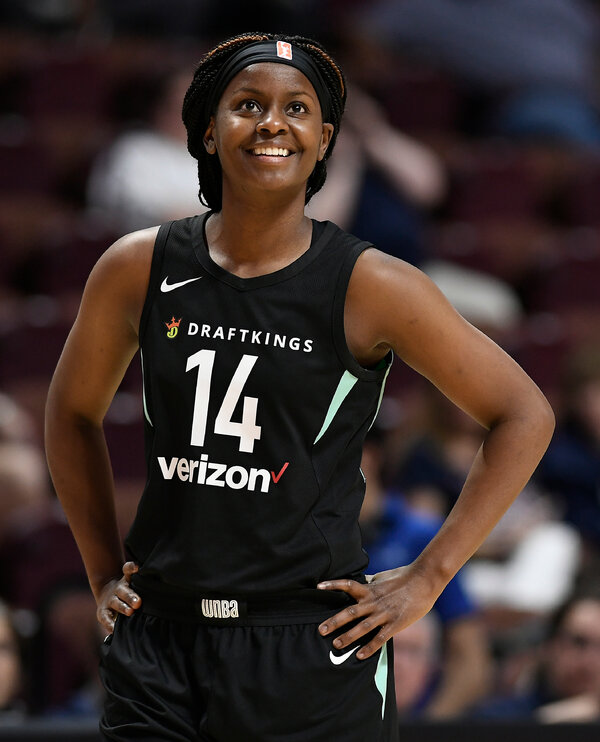 A recent graduate of Georgetown’s masters’ program in sports industry management and the author of “They Better Call Me Sugar,” a young adult memoir about her childhood, Rodgers, 31, spoke to The New York Times about her childhood, the sanctity of writing and the perspective she brings to the sideline.

This interview and has been condensed and lightly edited for clarity.

Your parents forced you to stay back in second grade. How did that impact your education journey?

My mom said, like, “You’ll be fine. This is where you belong because you’re not learning at the pace that they are pushing at.”

As a kid, you don’t look at it that way. You just look at it, like, “All my friends are going to be in the next grade and I’m going to get picked on because I was left behind.” And in my mind, like, it’s a reminder that I have failed, and because of that failure, I just have been, like: “I can’t fail again. I can’t fail again.”

I’ve always tried to put myself in a position to be successful, so using basketball as a tool to get out of my situation, that’s what I’ve done.

How did you find time while playing in the W.N.B.A. to pursue a master’s degree at Georgetown?

When I wasn’t in the gym working on my game, I was at home working on my degree. It was a little bit of a struggle, especially because I started in 2019 during the playoffs. Can you imagine? I’m just starting school, and we’re in the playoffs, and just having to find that balance in between the two. I really wanted to go back to school, so I know it’s something I really wanted to accomplish and I just made time. I just made it work, whether it was some nights I stayed up a little bit later, or I got up a little bit earlier.

Do you feel a shift is happening to include more women and women of color in W.N.B.A. head coaching and front office roles? And how did you know you were ready to move from center court to the sidelines?

For me, I do see it changing. I do see more African American women are, you know, coming on the sidelines and taking it, especially former players. I also think for me, I just woke up and didn’t want to work out anymore. So, I just knew mentally, spiritually and physically it was time for me to look into something else.

I actually kind of wanted to retire like two years ago.

What made you postpone your retirement and go to Las Vegas and play for your old coach Bill Laimbeer again?

Once the Liberty decided to trade me, I was like, at this point, a little exhausted with basketball and how long I had been playing. Mentally, it was having an impact on me and I wanted to just be able to take a break from basketball.

Bill and them, they traded for me. So, I was like, yeah, I’ll come out. They’d be a great organization.

It seems that the Liberty’s move in 2017 from Madison Square Garden to the Westchester County Center in White Plains was a low point for the franchise. Would you agree?

It was just, like, ‘Oh man, oh man.’ Like, a lot of people is not going to commute that far. You know, the die-hard fans are going to come, but we had a great fan base here in the city. I think that was kind of the devastating part of it, not being able to play in front of our fans and keep them coming back to the games and excited about the seasons.

Fast-forward to 2021, and the Liberty is a very different franchise, with a new owner in Joseph Tsai, a new arena in Brooklyn’s Barclays and a hot start to the season. To what do you attribute this massive turnaround?

I think they have a great owner. I think it started there when they were like, OK, we’re going to go play in the Barclays, and we’re going to treat you like A-1 class athletes. And that put them in a position to be able to get players to come play in New York.

Throughout “They Better Call Me Sugar,” you write about your mother wanting you to put golf first and basketball second, or not at all. As an adult looking back, do you have an understanding of why she held this view?

I just know golf was her thing, and maybe because back when she played basketball, there wasn’t opportunities for women. Because my mom was a basketball player, but way back in the day, it wasn’t opportunities like how it was for men. But now, looking at it, the W.N.B.A. is 25 years old. And just to be a part of that, it shows the W.N.B.A., can grow, the salaries can get there. It just takes one step at a time.

How did you begin writing about your childhood, and has writing been a source of healing for you?

When I was at Georgetown, I had a coach who suggested that I go to therapy and I’m just like, I’m not going to therapy. It’s for white people. But I was just ignorant to the fact because therapy, it’s taboo in the African American community.

I really didn’t like talking, and I went to therapy and I wouldn’t talk and I remember [the therapist] was like, “Well, just write it down.” And I would just write these stories and he would read them when I came in, because I didn’t like to talk. And, you know, I was like, man, these stories could become a book. It can help somebody in a situation that’s like mine or worse than mine.

Writing is therapeutic for me.

What do you feel like you bring that’s unique to coaching?

You get a lot of coaches who players cannot relate to, and I think sometimes you need that balance on the coaching staff. But if you have players who cannot relate, those players don’t fit because they feel like nobody understands them. And I just feel like I bring a lot.