As Wayne Bennett’s right-hand man during premiership victories at Brisbane and St George Illawarra, Jeremy Hickmans has worked with some of the toughest athletes to run onto a football field.

However, the Swimming Australia performance consultant has no hesitation in describing Ariarne Titmus as being every bit as formidable and unyielding as forwards Shane Webcke, Petero Civoniceva, Brad Thorn or Beau Scott.

“One hundred per cent, there’s no doubt about it,” Hickmans told the Herald. ”It’s just very different. The physicality that’s needed in rugby league is second to none, but the mental resilience to plough up and down a pool, day in and day out, when it’s seven degrees at 6am is very different.

“She’s been public in her admiration for Rafael Nadal. You can see that ability to nail it down and do the job. That’s how she turns up every day.

“I remember watching a session in Townsville when they were doing some high-level anaerobic work. I remember Arnie and Mitch [Larkin], essentially at the end of the pool between reps, were in the bushes vomiting.

“And that might be just a half-hour portion of a two-and-a-half hour session. For them, that’s normal. 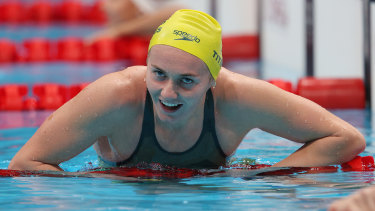 Tough as nails … Ariarne Titmus after winning gold in the 200m freestyle.Credit:Getty

“The mental resilience is huge, it’s probably stronger in some ways than team sports.

“The big thing about ‘Arnie’ is she commits to what she’s doing.”

After being “flicked” from his job at the Broncos when coach Bennett was moved on, Hickmans sought a new challenge. He found it working with Australia’s Olympic swimming medal hopefuls alongside Boxall at the pool at St Peters Lutheran College in Indooroopilly.

Much of his focus turned to Titmus as she battled to overcome tendonitis in her rotator cuff, a shoulder injury suffered at the state titles just before Christmas. Hickmans was tasked with overseeing her strength and rehabilitation work alongside physiotherapist Peter Wells, the trio treading the fine line of putting in the volume of work required to peak for Tokyo without re-injuring the shoulder.

Asked if there were moments when it appeared she wouldn’t make it, Hickmans said: “I think it was always a little thought in her background.

“We didn’t know what was going to happen at the time, we just got our heads down to get it right.

“She was outstanding with the way she approached it.”

Hickmans had arranged for Bennett to address the swimming squad prior to the Olympics, but the COVID situation put an end to that. Surprisingly, Hickmans said the unflappable Bennett and the hyperactive Boxall were similar in their coaching approaches.

“[Boxall] is actually very similar to Wayne but in a very different way, if that makes sense,” he said.

“Complete contrasts in that Dean never shuts up and is high energy, where Wayne is obviously different to that.

“But the way they go about it, the care they have for individual athletes and the responsibility they take for them, they really take it on board. They both care for them as a person.”

Hickmans said Titmus was every bit as strong and resilient as the toughest footballers he has worked with.

“I worked with Darius [Boyd] for a long time and he was as focused and committed as anyone I’ve worked with,” he said.

“Then there’s people like Beau Scott, who was just tough. Nicest guy off the field, but I wouldn’t want to go anywhere near him when it came to training.

“I remember Shane Webcke, Petero Civoniceva and Brad Thorn when I first started at the Broncos; if they found a chink in your armour, they went with it, they could be tough to work with.

“[Titmus] is just as tough, but in different ways, because there’s not that contact, but she is extremely tough in her own way.”

Never miss a medal or great sporting moment with our Olympic update emailed daily. Sign up for our Sport newsletter here.