Home » Teammates and Opponents Support Him. His Manager? Not So Much.

Teammates and Opponents Support Him. His Manager? Not So Much.

Throughout his 13-year major-league career, Carlos Gomez played with a certain style and exuberance that, on several occasions, rubbed his opponents the wrong way. He admired his home runs (and triples) — even those that didn’t win games — by dropping his bat or throwing his arms into the air. He remembered exactly which pitchers had hit him with a pitch. He slid hard into second base, before it was banned, even when leading by seven runs.

It’s not like Gomez, now 35, played with a reckless abandon, though. He knew baseball’s etiquette. As a rookie with the Mets in 2007, he watched and learned from stars like Carlos Delgado, Moises Alou, Carlos Beltran and Julio Franco. And, according to Gomez, he saw them swing at pitches on a 3-0 count in close games but never in lopsided ones.

“Winning by 10 or 12 runs, based on the way I learned the game, you shouldn’t do that,” Gomez said in a phone interview in Spanish from his native Dominican Republic. “It feels like you’re humiliating the opponent. But it’s modern times.”

Even in 2021, after so much hand wringing in the past, baseball somehow cannot escape a controversy about its unwritten rules. It’s a subject that Chicago White Sox Manager Tony La Russa, who recently admitted he didn’t know the written rules for extra innings, knows about well.

The apparent crime: Yermin Mercedes, the rookie designated hitter who is leading the majors in batting average, swung at a 3-0 pitch on Monday while facing a Minnesota Twins position player, Willians Astudillo, who was only pitching because his team was getting clobbered, 15-4, in the ninth inning of a game against the A.L. Central-leading White Sox. (It was a 47-mile-an-hour meatball over the plate, and Mercedes launched it 429 feet.) La Russa, a Hall of Fame manager who came out of retirement after 10 years to lead the White Sox, had wanted Mercedes not to swing at all.

“With that kind of a lead, that’s just sportsmanship, or respect for the game or respect for your opponent,” La Russa told reporters the next day. “He made a mistake. There will be a consequence that he’s going to have to endure within our family. It won’t happen again.”

Although the Twins were miffed, La Russa seemed even more upset with his own player. He called the 28-year-old Mercedes “clueless” about the situation because he was a rookie. “But now he’s got a clue,” he said.

Mercedes, who spent eight years in the minor leagues before reaching the majors, stood by his actions, telling reporters, “I’m going to play like that. I’m Yermin. I can’t be another person because if I do that, everything changes.” To which, La Russa retorted, “I heard he said something like, ‘I play my game.’ No, he doesn’t. He plays the game of Major League Baseball, respects the game, respects opponents, and he’s got to respect the signs.”

When Twins reliever Tyler Duffey threw a pitch behind Mercedes in apparent retaliation the day after the home run, La Russa again sided with his opponent, saying he had no problem with it. (M.L.B., however, did have a problem with it, handing down a three-game suspension, which Duffey is appealing.)

And when Mercedes’s teammates, like the veteran pitcher Lance Lynn, backed him (“the more I play this game, the more those rules have gone away”), La Russa doubled down.

“Lance has a locker; I have an office,” he told reporters. “I would be willing to bet that there wasn’t anyone in that clubhouse that was upset that I mentioned that’s not the way we compete.”

While not correct about the perception within his own clubhouse, La Russa was about the precedent. According to ESPN, major-league hitters have seen 557 pitches in a 3-0 count with their teams leading by at least 10 runs over the past 20 years, and Mercedes was the first to swing. But that doesn’t necessarily make the tradition right.

Baseball is full of tradition and conformity. People within the game frequently talk about playing it “the right way.” But baseball is a global sport, and the way people play in Japan, for example, or the Dominican Republic, Mercedes’s home country, isn’t the same as the United States. (Gomez faced this tension throughout his career.)

Over the decades, those unwritten codes — from how to celebrate a home run to how much flair to show on and off the field — have been challenged, particularly by younger generations. M.L.B. itself has embraced the energy of its young ebullient stars with a campaign titled, “Let the kids play.” The league even showed enthusiasm for the home run in question, tweeting out video of it multiple times, using Mercedes’s Yerminator nickname and saying he would excel at slow-pitch softball.

“It’s a debate that’s both interesting and complicated at once,” Gomez said. “It’s interesting because it’s 2021, and a lot has changed about the game.”

Even though more batters are gradually swinging at 3-0 pitches, rather than trying for a walk, another young star, Fernando Tatis Jr. of the San Diego Padres, sparked a controversy last year when he swung at one late in a lopsided game and smashed a grand slam. He initially faced resistance from his own manager and he apologized, which teammates and opponents later said he shouldn’t have done. Recently, Tatis poked fun at the incident in a new commercial. 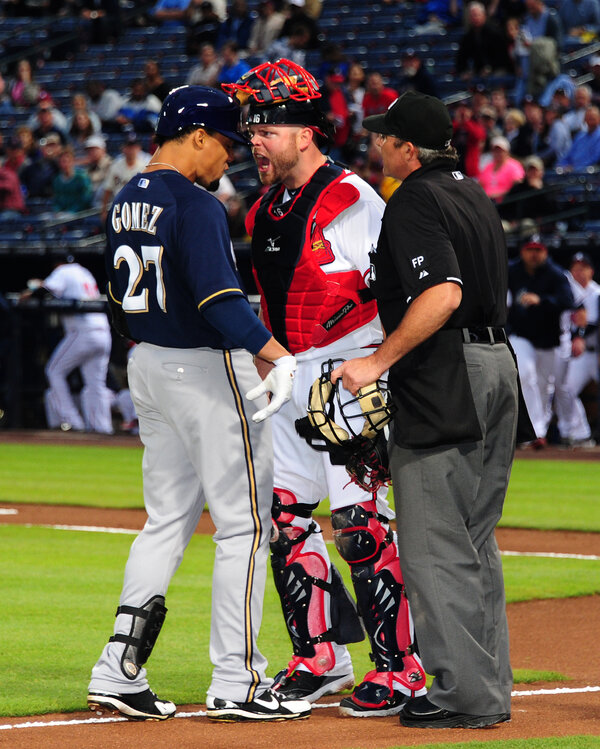 Gomez said that if he was facing a respected veteran pitcher in a blowout, like Clayton Kershaw or C.C. Sabathia, he wouldn’t swing at a 3-0 pitch. But if it was a position player, all bets are off — a sentiment Lynn also expressed.

With players judged more than ever by their statistics, Gomez said he didn’t fault Mercedes — who is making the major-league minimum of $570,500 — for taking advantage of a pitch that could pad his numbers and perhaps his wallet one day. He did fault La Russa, though.

“A lot of respect for La Russa, but he thinks like a player from before,” Gomez said. “Things are different now. And it doesn’t matter if my player is right or not. To the media, I’m going to support my player, even if I call him to my office later and say, ‘That was bad what you did. You shouldn’t do it.’”

Gomez said La Russa’s actions could sow mistrust of the manager in the clubhouse. Sabathia, who retired after the 2019 season, took it even further with an expletive-filled rant on his podcast. He suggested there be a 10-run mercy rule so position players aren’t needed to pitch and, thus, would avoid the opportunity to break “stupid” unwritten rules.

“Tony La Russa is out of touch with the game, cuz,” Sabathia said. “He should not be managing one of the best teams in the American League, period. The fact that Tim Anderson, basically the captain of their team, had to go on Instagram and step up for his teammate like, ‘Yeah, the game wasn’t over.’”

(In reply to a post about the incident from NBC Sports Chicago, Anderson said: “The game wasn’t over! Keep doing you big daddy.” Mercedes responded to Anderson’s comment, saying, “yes sir let’s do it baby.”)

Even opponents came to Mercedes’s defense. Alex Wood, a San Francisco Giants pitcher, wrote on Twitter that, if a position player was pitching in a major league game, all rules had been thrown out the window.

“Plus do y’all realize how hard that is to launch a 49mph pitch 400 feet lol?” he continued. “Give the people what they want.”

Added Los Angeles Dodgers pitcher Trevor Bauer, the reigning National League Cy Young Award winner: “Dear hitters: If you hit a 3-0 homer off me, I will not consider it a crime. Dear people who are still mad about a hitter hitting: kindly get out of the game. Can’t believe we’re still talking about 3-0 swings. If you don’t like it, managers or pitchers, just be better.”

In show of support that crossed generations on Thursday, Steve Stone, the 1980 American League Cy Young Award winner and a longtime White Sox television broadcaster, joined the chorus of support for Mercedes, while referencing the style of play of closer Liam Hendriks and Anderson:

“I played against and with 40 HOF ers,” he wrote on Twitter. “We had our moments. We pass the torch to a new generation and they are diverse. I say let them play as they see fit. Let Tim flip his bat. Let Liam scream. Wear chains. The game is in their hands. We left a great game. Make it better.”