Home » Sport » The Raptors’ Journey to the Championship Began With Failure

The Raptors’ Journey to the Championship Began With Failure

TORONTO — The journey in Toronto, as many triumphs do, began with failure.

Last season, the Raptors had won a franchise-record 59 games, riding the backs of its stars Kyle Lowry and DeMar DeRozan. They had a respected coach, Dwane Casey, who had guided the franchise to its third straight 50-win season and to several promising young players. The finals loomed.

Except Toronto, as one broadcaster noted, once again became “LeBronto:” For the third straight year, LeBron James and the Cleveland Cavaliers easily brushed the Raptors aside in the playoffs en route to the finals. Would Toronto ever get over the hump? Masai Ujiri, who has run Toronto’s basketball operations since 2013, didn’t think so, leading to a pair of the gutsiest league paradigm-altering gambles ever taken by an N.B.A. executive:

First, Ujiri fired Casey four days after he won the league’s coach of the year award and eventually elevated Nick Nurse to replace him. But that was nothing compared with what came next: Ujiri shocked observers by trading DeRozan, Jakob Poeltl and a first-round draft pick to the San Antonio Spurs for the disgruntled superstar Kawhi Leonard (who had only one year left on his deal), the sharpshooter Danny Green and cash. In a way, the cash was the surest part of the deal.

We forget now: When Ujiri made the trade for Leonard, there was significant concern among Toronto fans and other basketball watchers, in spite of Leonard’s championship pedigree (and Green’s, for that matter).

First off, James had left to join the Los Angeles Lakers, theoretically leaving the Eastern Conference open for the Raptors. Second, Ujiri traded away the beloved and charismatic DeRozan, a franchise player who outwardly spread his arms to Toronto, and vice versa.

It was unclear who the Raptors were getting in return. A sulking, possibly unhealthy player who might leave after a year? If Leonard couldn’t make things work under Gregg Popovich in San Antonio, how would it happen in Canada?

Then something unexpected happened. It wasn’t immediate, but a slow and steady process: Leonard’s workmanlike demeanor became a hallmark of the Raptors’ play — carrying them to previously unforeseen heights. After years of torturous playoff exits, here came Leonard, a great unbesmirched by the ghosts of the franchise’s past.

Toronto, a city filled with the success stories of immigrants and other bootstrappers who share Leonard’s work ethic, embraced the seemingly silent powerhouse. Within a year of arriving, Leonard accomplished more for basketball in Canada than any other player.

All this is a surprising development in hindsight: Leonard’s season before arriving in Toronto was full of spectacle, even as he stayed quiet about a conflict with the Spurs about whether an injury had been misdiagnosed.

And even stranger, we still don’t really know what happened. There were rumors, cryptic statements, seeming bafflement and frustration publicly from San Antonio — but only characteristic silence from Leonard.

Clearly, there had been a breakdown of communication between San Antonio and Leonard, even though they won a title together in 2014. This may have been more important than anyone in San Antonio ever realized until it was too late. Dennis Robertson, Leonard’s uncle, also known as “Uncle Dennis” in N.B.A. circles, said as much in an interview published by Yahoo during this year’s postseason: “They didn’t believe Kawhi couldn’t play and that caused a lack of trust in us and then us not believing in them,” Robertson told Yahoo. “Anytime a player says he’s not capable of playing, you should believe him.”

But one team’s divorce is another one’s gain. Leonard jumped forward, carrying an entire country to its first professional basketball championship. 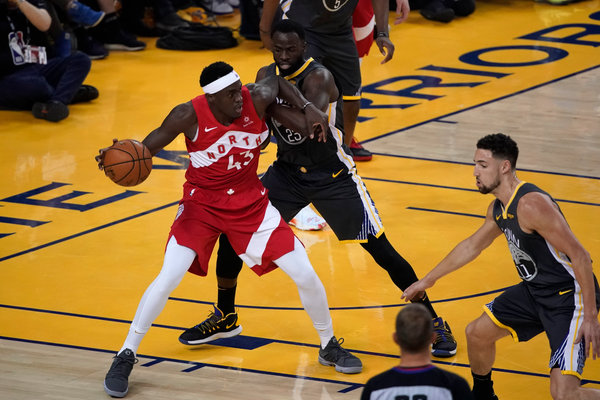 There was uncertainty about Leonard’s health after the trade. But the Raptors went to great lengths to manage Leonard’s workload in the regular season to keep him fresh for the playoffs. He played only 60 of 82 games, never playing back to back, and averaged 34 minutes, while putting up the best numbers of his career. Put in practice by Dr. Alex McKechnie, the Raptors’ director of sports science, this was commonly referred to as “load management,” and the results will most likely shift how other franchises treat their best players going forward.

Toronto was steady all season, with or without Leonard on the court.

The Raptors burst out of the gate winning 12 of their first 13 games, including double-digit wins against the Celtics, Lakers and 76ers. They had only one three-game losing streak during the entire season, which netted 58 wins, only one off their franchise record set the year before. Several players, like Pascal Siakam (a leading contender for Most Improved Player), emerged to help Leonard with a more direct form of load management. Green, considered a side dish rather than the main course in the trade, also was a key contributor, including a buzzer-beating game-winner against the Orlando Magic early in the season.

In September, at his introductory news conference as a Toronto Raptor, Leonard was asked by a reporter what he wanted fans to know about him.

He paused for a split-second, then spoke while remaining expressionless.

“I’m a fun guy. Obviously, I love the game of basketball,” Leonard deadpanned. “I mean, there’s just more questions you’ll have to ask me in order for me to tell you about myself. I just can’t give you a whole spill.”

And then came the laugh, a snicker that would enter the annals of N.B.A. history as one of the most awkward moments ever witnessed at a basketball event. Leonard gave the chuckle of someone who had misread an instruction manual on how to do it. The sound and the accompanying facial expression (or lack thereof) instantly became a viral meme, reinforcing a long-held notion that Leonard lacked a personality.

It turned out, though, that Leonard actually was a fun guy. He even tasted a pizza with a bull’s private parts on his teammate Serge Ibaka’s cooking show — although at first he resisted, saying, “No sirree, Bob.” When the playoffs came around, Leonard put his humor on full display. Following the Milwaukee Bucks blowing out Toronto in Game 2, 125 — 103, he was asked where the Raptors would go from there. Leonard didn’t skip a beat: “I’m going to Toronto for Game 3.” The corners of his lips curled upward ever so slightly.

After the Raptors tied the series at two, Leonard took part in a postgame interview with an ESPN China reporter, who asked him whether he had anything to say to his fans. He let out a bigger smile and said “ni hao!” before walking out of the camera shot and asking the reporter, “Is that ‘hi’?”

Leonard has let loose on and off the court. There is now a billboard hanging above the Toronto Eaton Centre of an unsmiling, sweatshirt-wearing Leonard, with the words “Fun Guy” emblazoned next to him. In early May, Leonard was photographed wearing a T-shirt with the same words.

That he would make light of himself may seem out of character. But if Leonard re-signs with Toronto, those moments indicate that he was more comfortable north of the border than initially predicted.

More gambles and the playoffs

To further show their commitment to winning, the Raptors swung for the fences again in February, trading once key pieces of Toronto’s core like guard Delon Wright and Jonas Valanciunas for the former Defensive Player of the Year, Marc Gasol.

It was another risk: Wright and Valanciunas were young, productive talents entering their primes. They were cheaper than the 34-year-old Gasol, who was having an underwhelming season with the Memphis Grizzlies.

But Ujiri was putting his chips on the table to support Leonard in a bid to win right now. Read another way, Ujiri showed Leonard that Toronto was committed to him. (The signing of Jeremy Lin, also in February, who was having an excellent season with the Atlanta Hawks, didn’t quite work out.)

But that didn’t mean the Raptors didn’t have old demons to defeat. They lost their first playoff game against a plucky Magic team. Lowry didn’t score a single point, rekindling an overblown narrative that he wasn’t a playoff performer. But this time, the Raptors had Leonard. Lowry bounced back, and Toronto didn’t lose another game in the series. Leonard led the team in scoring four of the five games.

In the second round, Toronto faced Philadelphia in what will go down as one of the strangest, most talked about playoff series in basketball history.

Four of the seven games were decided by double-digits. In two of the contests, neither team cracked 100 points, a throwback to an older, now-seemingly defunct style of basketball. But after six games of exchanging body blows, the series went to the Scotiabank Arena for Game 7. In the final seconds, Leonard rose up from the right baseline and rimmed in what immediately became the most important jumper in Canada history. The shot caused Philadelphia’s star center, Joel Embiid, to weep, as the Sixers were sent home in devastating fashion, 92-90. Even the typically reserved Leonard let out a scream.

The Raptors lost the first two games of their next series on the road against the Bucks, who had the higher seed. Game 2 was a blowout. It seemed as though Toronto had no answer for the likely Most Valuable Player, Giannis Antetokounmpo. But the 2019 Raptors did have one: Leonard.

In Game 3, a double-overtime thriller, he played a whopping 52 minutes to rescue his team from going down 3-0, dropping 36 points. Toronto reeled off four straight, shocking Milwaukee. Leonard, looking fatigued, scored 27 points and grabbed 17 rebounds in the clincher.

Now, the Raptors are immortalized and Ujiri’s gamble has officially paid off. With Leonard at the helm on the court, these Raptors were daunted by nothing: whether it was Antetokounmpo or the Warriors’ talent glut. It’s been a perfect match: Leonard was a stabilizing influence for an anxious Raptors team reeling from the results of recent years. He was exactly who they needed.