Home » Sport » The U.S. handily defeats Spain in men’s basketball, moving on to the semifinals.

The U.S. handily defeats Spain in men’s basketball, moving on to the semifinals. 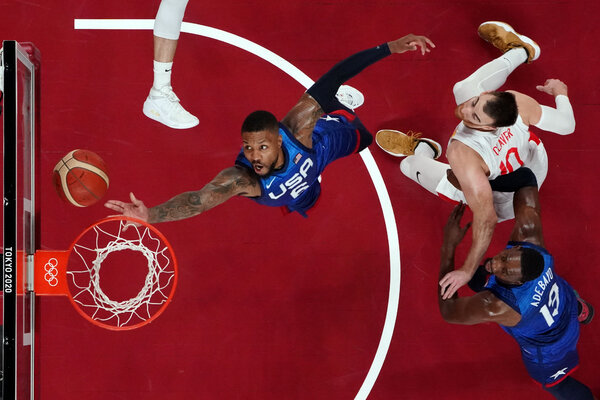 SAITAMA, Japan — The United States men’s basketball team appears to be hitting its stride, finally, at just the right moment.

In a do-or-die quarterfinal matchup against Spain, the world’s No. 2-ranked team, the Americans overcame a sluggish first half and found some harmony on offense to notch a 95-81 win on Tuesday afternoon at Saitama Super Arena.

The United States men — who are ranked No. 1, but have not always looked sharp as a group this month — now advance to the semifinal round, where they will face the winner of a contest between Argentina and Australia.

Leading the way for the Americans was Kevin Durant, who scored 29 points and hit several tough shots after halftime to puncture Spain’s organized defense. He finished the game shooting 10 for 17 from the field, including 4 of 7 from 3-point range. His strong play helped the Americans brush aside a poor first half in which they shot just 38 percent from the field.

Ricky Rubio was the main instigator for Spain, scoring 38 points. The Spanish, bigger and apparently better drilled, used their size as an advantage whenever they could. They won the rebounding battle, 42-32, and cashed in on several second-chance opportunities around the basket.

After two exhibition losses before the start of the Games, the United States started its Olympic campaign with a loss to France. The Americans mostly cruised through their next two contests — against far weaker opponents, Iran and the Czech Republic — and had some time to establish some rhythm as a group.