Tom Brady Charted a New Path. Aaron Rodgers Struggles to Do the Same.

The final contract that Tom Brady signed in New England, in August 2019, contained a clever provision that prevented the Patriots from placing a franchise or transition tag on him, ensuring that, as he desired, Brady would become a free agent after the season.

In this booming era for quarterbacks in the N.F.L., even average players are paid tens millions of dollars, to say nothing of stars like Brady, who got $22 million guaranteed in that deal. Five quarterbacks were taken in the first round of the draft Thursday night — including at the first three spots — as teams fervently aimed to build around personality and production at the most important position in American pro sports.

Yet, as Aaron Rodgers is discovering, quarterbacks have little power, because this is the N.F.L. and not the N.B.A., where the best players, armed with guaranteed contracts, can prioritize winning over financial concerns. In the N.F.L., players who want to change teams are at the mercy of their contract structures and have barely a modicum of control over their careers.

However disenchanted Brady became in New England — with the lack of receiving talent, with his diminishing power to influence personnel decisions — he did not air his grievances publicly. Done with the Patriots after two decades and six titles, Brady didn’t pout. He just left. His contract allowed him to do so.

And in Tampa Bay, where Brady signed before the 2020 season, he found a better roster, a front office that valued his opinion and, in the end, a vindicating championship.

Among the few to see Brady’s seventh Super Bowl win in person was the Seattle Seahawks’ Russell Wilson, who has become the N.F.L.’s most sacked quarterback across his first nine seasons since the league merged with the A.F.L. more than a half-century ago. Wilson must have noted that the 43-year-old Brady shredded Kansas City’s secondary from a clean pocket.

Seven days after the game, Wilson told the news media that he wanted a larger voice in Seattle’s personnel decisions. His agent also let it be known that there were four teams that Wilson would agree to be d to — without actually, you know, demanding a trade. 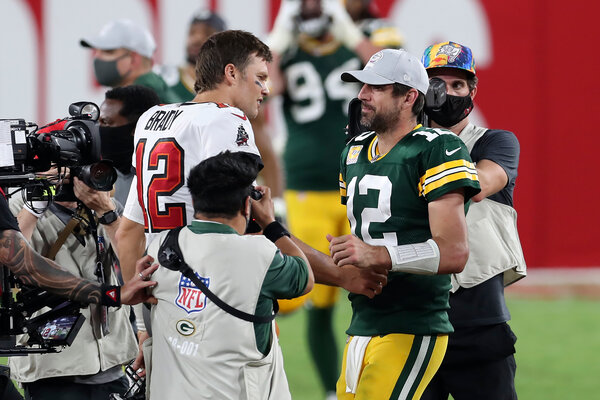 This week, reports of Aaron Rodgers’s dissatisfaction with management detonated in the frenetic hours before the draft. His veiled refusal to play for Green Bay again was swatted down just hours after reports of it surfaced. The team’s general manager, Brian Gutekunst, avowed that Rodgers would not be traded. Rodgers and the Packers, it should be noted, lost to Brady and the Buccaneers in the N.F.C. title game in January.

That the news of Rodgers’s discontent broke when it did suggested a calculated disruption by one of the league’s most calculating disrupters, an attempt by the quarterback’s camp to embarrass the Packers just as they embarrassed him on draft night last year. That was when they traded up to draft a quarterback, Jordan Love, without communicating their intentions to Rodgers, who then had four years left on his contract.

Either way, the Packers’ clunky handling of the situation and long-term draft strategy antagonized Rodgers. Craving vengeance, he had the best season of his career.

Rodgers tends to choose his words with the precision of a safecracker, and he sprinkled cryptic hints about his feelings in various interviews. To wit, he acknowledged his tenuous relationship with the team a few days before losing the conference title game, calling his future “a beautiful mystery.”

And that was before Packers Coach Matt LaFleur made the confounding decision to attempt a close field goal, while down by 8 points late in the game, instead of trusting Rodgers to throw a tying touchdown.

Both Rodgers and Wilson have publicly broached the possibility of divorce from their teams, sending implicit “make me happy or I’ll ask out” threats. But neither Green Bay nor Seattle is incentivized to do anything beyond listen to its quarterback’s gripes and try to improve the overall quality of the roster.

Rodgers, 37, is contractually tied to the Packers through 2023. His only options in the wake of that draft-day report are toothless: He can skip mandatory minicamp in June or training camp in July, and he can remain absent once the season starts. But by holding out or even retiring, Rodgers would accrue fines and even, perhaps, lose some bonus money he is still owed. Rumor has it “Jeopardy!” is looking for a full-time host.

Considering the more palatable salary-cap charges Green Bay would incur if it traded Rodgers next year — $17.2 million, according to Jason Fitzgerald of the website Over the Cap — it’s far more likely that the Packers, when they drafted Love, were envisioning parting with Rodgers before the 2022 season. Rodgers has reportedly declined an extension.

Before allegations of sexual misconduct by Deshaun Watson surfaced in lawsuits, the Texans’ quarterback harbored similar disenchantment with his team. Incensed by Houston’s front-office dysfunction and roster mismanagement, and coming off a 2020 season in which he led the league in passing yards, Watson insisted that he would never play for Houston again.

Watson had a no-trade clause negotiated into the four-year extension he signed in September 2020, giving him sway over where he would play next, but the Texans also had leverage: They signed Tyrod Taylor in March, setting up a scenario in which the team could let Watson sit out the full 2021 season, perhaps longer, while fining him millions of dollars for missed time.

At one point not long ago, Brady and Rodgers each envisioned spending his entire career in one place, playing into his 40s with the team that drafted him. But circumstances changed. The Packers drafted Love; Bill Belichick — the Patriots’ coach, general manager and jury — stared his quarterback down. So Brady moved south to win with a team that valued his input.

“Everybody wants to be Brady,” said Marc Ross, a longtime personnel executive with the Giants and the Eagles. “To try to compare what he does and the things that he’s accomplished and the maneuvers that he can make, he’s just really one of a kind.”

The Packers, like the Texans, had already solved one of the biggest team-building conundrums in professional sports. If the most precious commodity in the N.F.L. is a star quarterback, the hardest task is finding one — and team owners didn’t get to be as rich as they are by always treating commodities like people.