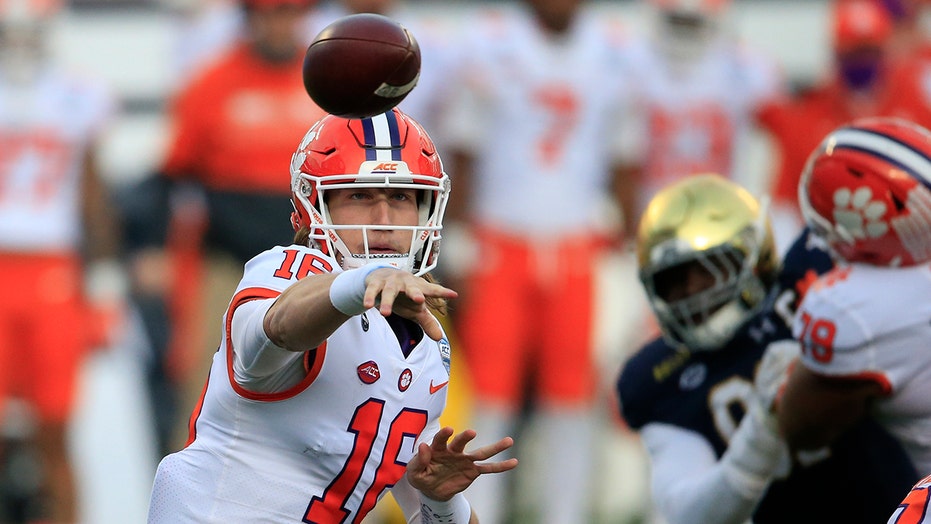 Trevor Lawrence was sidelined and recovering from coronavirus when Notre Dame beat Clemson in double overtime earlier this season and Saturday night showed just how much the Tigers missed him.

The star quarterback led Clemson to its sixth consecutive ACC championship with a 34-10 victory against the Fighting Irish. Lawrence dazzled the entire game.

He finished 25-for-36 with 322 passing yards, two touchdown passes and an interception. He added 90 yards on 14 carries and a touchdown on the ground, making an outside case for the Heisman Trophy.

Travis Etienne led the Tigers with 124 rushing yards on 10 carries. He also scored a touchdown.

Notre Dame had a tough time getting the offense going despite nearly putting up 50 points on them in their previous matchup.

Ian Book was an efficient 20-for-28 passing with 219 passing yards, but didn't throw a touchdown pass. Kyren Williams had 50 rushing yards, but it was Chris Tyree who had Notre Dame's lone touchdown.

The College Football Playoff committee will definitely have a tough time figuring out whether Notre Dame belongs in the final four. Clemson basically has clinched a spot in the top four.

END_OF_DOCUMENT_TOKEN_TO_BE_REPLACED

END_OF_DOCUMENT_TOKEN_TO_BE_REPLACED
Recent Posts
We and our partners use cookies on this site to improve our service, perform analytics, personalize advertising, measure advertising performance, and remember website preferences.Ok