Home » Sport » US Open betting tips and predictions: Rahm, Woods and Schauffele the contenders but 200-1 outsider could be pick of week

US Open betting tips and predictions: Rahm, Woods and Schauffele the contenders but 200-1 outsider could be pick of week

THE second Major of the season is upon us – and it promises to be a cracker at brutal Winged Foot.

Colin Montgomerie and Phil Mickelson threw away golden chances to win when the game's toughest tournament was last held at this New York course in 2006. 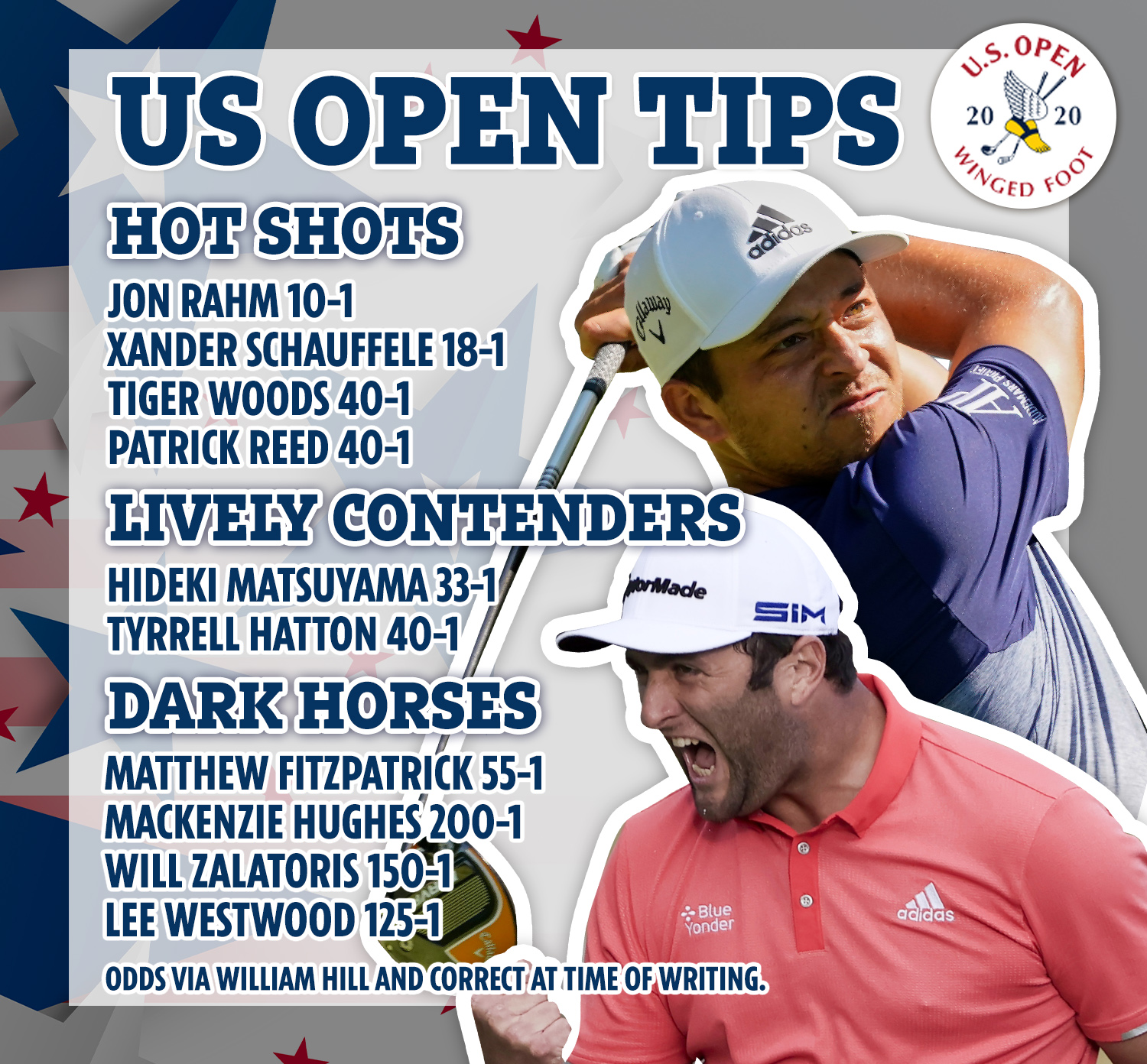 And with the typically penal rough set to be in full force again, expect someone who can salvage a par when a bogey (or worse) looks likely to come out on top.

Here, SunSport's David Facey – who told you to back 30/1 winner Collin Morikawa in the USPGA – runs through his selections, with prices from William Hill.

Several firms are paying ten places on each ways so it's worth chucking in a few outsiders who could go well.

Jon Rahm, 10-1; A repeat of the form he showed to win the BMW Championship over another ultra-tough layout would be good enough at Winged Foot.

The world No 2 has clocked up two wins and two other top six finished in his last six starts.

Xander Schauffele, 18-1: If you take away the head starts at the Tour Championship he would have won the tournament by three shots – and that has been taken into account by the World Rankings organisers, who have pushed him up to seventh.

Tiger Woods, 40-1: OK, hear me out… with so many places being paid out on for each way bets, you want someone who can offer you a decent return for 1/5 the odds.

And with so many players so evenly ranked at the top of the rankings, let's go for someone who has done it all before and is due four good rounds.

Woods is a battler, a grinder, a wily veteran now at 44. He loves a tough challenge (when Ogilvy won he finished five over) and remains one of the best iron players in the game – essential at Winged Foot, where finding the correct part of the massive greens is important.

Patrick Reed, 40-1: When Monty was runner up here he said everyone would three-putt and the greens were more difficult than Augusta's.

Reed is already a Masters champ and finished last season 12th in strokes gained putting on the PGA Tour. He loves a fight and is made for the test of nerves the US Open always puts up.

Dustin Johnson is the in-form star, but at 15-2 is too short.

Hideki Matsuyama, 33-1: The Japanese star is a real grinder who hits tons of greens, and the fact that the US Open will not be just a putting competition will help his chances.

Impressive when finishing third in the BMW Championship.

Tyrrell Hatton, 40-1: Announced himself on the world stage winning Arnold Palmer's Bay Hill tournament in March and has recorded five top-25s in seven tournaments since then.

He is a ball-striking machine who looks to have tamed his volcanic temper and mastered what it takes to win at the highest level.

Matthew Fitzptarick, 55-1. His two best performances since the shutdown ended have been in the toughest events – third at Memorial and sixth in the BMW.

His ability to hole par-saving putts under pressure will be a real weapon at Winged Foot.

Mackenzie Hughes, 200-1. Hard to understand why he is such a huge outsider, as the Canadian battler’s scores have been trending nicely – tied 13th at the Northern Trust, top ten at the BMW and seventh best four round score at East Lake.

Will Zalatoris, 150-1: You may not have heard of him but Korn Ferry star Zalatoris is one of the hottest players on the planet.

He has not finished outside the top 34 in 16 events on the second-string US circuit this season, and ended the latest tournament tied second after a brilliant closing round.

Zalatoris hits it a mile and is pin-point with his irons. Seems to be primed to break onto the world stage.

Lee Westwood, 125-1: Westy has been a bit hit and miss in the US Open, but his hit is very good, with five top tens.

Ryder Cup hero fired an amazing final-round 67 at Valderrama recently – the lowest on the day by two strokes – on a set-up that was painfully tough.

Has he got it in him to finally claim a big one? Maybe not. But I'll take him for the place money at a big price.

END_OF_DOCUMENT_TOKEN_TO_BE_REPLACED

END_OF_DOCUMENT_TOKEN_TO_BE_REPLACED
Recent Posts
We and our partners use cookies on this site to improve our service, perform analytics, personalize advertising, measure advertising performance, and remember website preferences.Ok