Severn Stars and Strathclyde Sirens both delivered purposeful performances on Saturday to come out on top at the Copper Box Arena in London.

Melissa Bessell’s side overcame Surrey Storm, while the Scottish franchise continued their excellent season as they brushed aside the home team, London Pulse.

Finally, Saracens Mavericks were able to put their loss to Loughborough Lightning behind them and remind the competition of how quickly they can score goals against Celtic Dragons.

The action continues on Sunday, as Round 14 of the competition starts with a triple-header of matches.

Sirens will return to court and meet Leeds Rhinos at 2pm, before Pulse take on Manchester Thunder. In the final contest of the day, Team Bath Netball will face-off against Wasps.

Severn Stars secured their third victory of the season with a 46-39 result against Surrey Storm on Saturday lunchtime.

Afterwards, Bessell said that the match was “do or die” for Stars and the straight-talking head coach reserved particular praise for her team’s courage, composure and belief.

For Surrey Storm, the loss was their second of the weekend, however Mikki Austin was much happier with her side’s application and they will return to court next Sunday against Strathclyde Sirens.

With the two teams sitting next to each other in the Superleague table, all of the signs pointed to a close encounter and when they turned each other’s first centre passes, that set the tone.

For the rest of the quarter, both wrestled for supremacy. At one end Alima Priest and Leah Middleton worked tirelessly, while Lucy Herdman had the challenge of keeping Karyn Bailey quiet.

After Storm finished the first quarter strongly, Stars did the same in the second and opened up a four-goal lead at the break.

It was a lead that Stars would retain throughout the second half, as they took care of their own possession well and didn’t allow Storm to string enough phases together to gain control.

Although Storm did hit back to within two goals with three minutes to play, Stars stayed focused and a final tip from Herdman sparked a well-timed sprint finish. 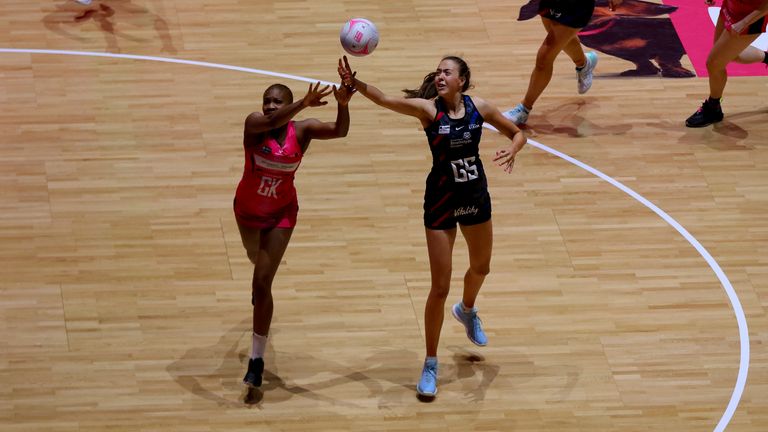 In the second contest of the afternoon, Strathclyde Sirens converted a fast start into another productive victory over London Pulse.

The Scottish franchise led 24-16 at the midway point, courtesy of a fluid opening half. From the first moments they looked calm on the ball and richly deserved their six-goal cushion after 12 minutes.

With Emma Barrie slotting goals easily, and Sirens’ hard-working mid-court bringing the ball through well, they doubled their tally in the second quarter.

Eager to build on their lead, Sirens stuck with their starting line-up for the third, while Sam Bird made widespread changes for London Pulse.

The changes sparked a response at both ends for Pulse, they won the third quarter 12-11, however, Sirens continued to adapt on the job.

With the words of both Karen Atkinson and Lesley MacDonald ringing in their ears, and with their strong start behind them, Sirens attacked the last quarter and remained in front until the final whistle.

Saracens Mavericks secured a much-needed victory over Celtic Dragons to turn around a tricky run of matches and keep their eyes fixed on the top four.

After losing four of their last five, Mavericks worked hard to prevail over a confident Dragons outfit, and Kat Ratnapala used her bench to bring about a game-changing third quarter.

Early on, Mavericks found their feet well and quickly turned a three-goal lead into five at quarter time. However, Dragons settled in the second quarter and started to show the belief that had propelled them over the line on Friday night.

Abby Tyrrell’s work in defence was critical. She disrupted the shots of Chloe Essam and Kadeen Corbin and an 11-9 quarter in Dragons’ favour meant that both teams went into the break believing they could win.

For the third, Dragons’ line-up remained stable while Ratnapala introduced Beth Ecuyer-Dale at Centre and Britney Clarke at shooter.

As Ecuyer-Dale upped the defensive intensity through court and Clarke got the better of Annika Lee-Jones, Mavericks racked up the goals. Following the final pause, they picked up where they left off and put their foot to the floor to finish in style.