Home » Sport » ‘We only take the best’: The video to inspire the Dolphins in Tokyo

‘We only take the best’: The video to inspire the Dolphins in Tokyo

A nod to history, a look into the future and a call to arms by legendary coach Laurie Lawrence. This is the rallying cry of the Australian swimming team as it prepares to wade into the Olympic waters in Tokyo.

The Dolphins have released their hype video ahead of their first session in the pool on Saturday night, sharing it on social media after it was shown to the team before they left their training camp in Cairns.

It’s a spine-tingling training montage narrated by Lawrence as he pays homage to Australia’s first Olympic gold medal winner, Freddie Lane, who triumphed in 1900 when he won a pair of events in the River Seine in Paris.

Fast-forward to the eve of the Tokyo Games and the video shows the cap presentations of new Dolphins Mollie O’Callaghan (Dolphin 819) and Bundaberg backstroker Isaac Cooper (Dolphin 813), both of whom will make their Olympic debut over the coming week.

The video gives an insight into the emotions and personal triumphs; coach Michael Bohl stands proudly with his star sprinter Emma McKeon and four-time Olympian Emily Seebohm, breastroker Matt Wilson breaks down in tears when he is called into the team after the death of his grandmother, Cate Campbell embraces Dawn Fraser after being named flagbearer with Patty Mills.

Then there is world champion freestyler Ariarne Titmus, alone in the gym to put in the extra work. She will be at the centre of one of the great rivalries when she meets Katie Ledecky in the 200m and 400m freestyle. “It’s about staying on and doing more when all the rest went home,” Lawrence says over the top of the footage. 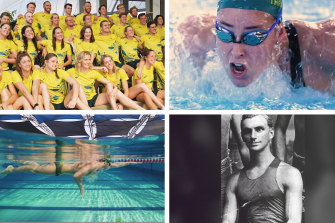 The video will set the scene for Australia’s assault on the Olympic pool in Tokyo.Credit:Swimming Australia

This squad has better balance than the one that went to Rio and the new and the experienced are presented as formidable combatants. Kaylee McKeown, the 100m backstroke world record holder, stands defiantly, as does three-time Olympian Mitch Larkin, Olympic champion Kyle Chalmers and a youngster who wants gold of his own, 400m freestyle favourite Elijah Winnington.

It rounds off with the squad, in full Olympic regalia, posing for official photos before they leave Cairns and head towards the bubble of the Olympic Village and what they hope will be a pool of dreams near Tokyo Bay.

“Thousands try to represent,” Lawrence says. “But we only take the best.”